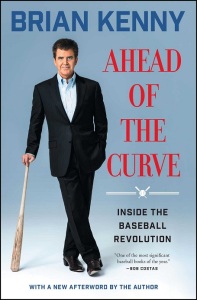 There is no book that I have read in recent years that I can more highly recommend than “Ahead of the Curve” by Brian Kenny.

Kenny is a 2003 Emmy Award winner who was named as the 2004 Media Personality of the Year by Sports Illustrated. He is now well-known by baseball fans as a studio host for the MLB Network. In addition, Kenny is respected as a boxing analyst and broadcaster.
A longtime ESPN anchor and analyst, Kenny left in 2011 for the television stint with the then two-year old MLB Network. He also hosts ‘The Brian Kenny” show weekdays on NBC Sports Radio.
With his new TV gig, Kenny also joined former player Harold Reynolds on the ‘MLB Now‘ program. The show is highlighted by Kenny espousing modern “Sabermetric” statistical analysis of America’s Pastime.
Those Sabermetric views make up the centerpiece of “Ahead of the Curve“, which comes with an “Inside the Baseball Revolution” sub-title.

JAMES AND SABR REVOLUTIONIZE THE GAME

Sabermetrics principles were introduced decades ago by stats guru and writer Bill James, a hero of Kenny’s. This study and analysis of baseball via a statistical approach draws its name from SABR, the Society for Baseball Research, which itself was founded in 1971.
Kenny writes in chapter four titled “The Epiphany” of his own introduction to James’ questioning of previously long-accepted baseball dogma:

“Reading James unrelenting questioning gave me a vivid illustration of scientific inquiry. Like most everyone else, I had somehow glazed over all of that in Chemistry and Biology. Apply it to baseball? Now it all made sense. And nothing would ever be the same. Other baseball writing, by comparison, would seem like a gossip column.”

But readers of this book review shouldn’t allow the idea of statistics to intimidate you. Any baseball fan with any level of education will easily understand and appreciate the vast majority of Kenny’s brilliant work.

That is the true genius of this book. Kenny explains things in layman’s terms. He highlights the explanations and arguments with famous baseball events and personalities. As a result, he makes statistical analysis accessible to the common fan.
In comparing Joe DiMaggio to Ted Williams, or Mike Trout to Miguel Cabrera, both of which Kenny does in the book, he supports all of his points. Furthermore, Kenny does so in a language that fans of the game will find both easy and enjoyable to follow.
In the book, Kenny explains some of his favorite principles, such as the “bullpenning” concept. This was an idea touched on in the 2016 World Series.

“If professional baseball were starting now, there’s no way we would use the current model. We would “bullpen” most days. It will take a certain amount of reconditioning, no doubt, but the benefits of doing this would be enormous. No more ‘starters’, no more ‘relievers’, no more ‘wins.’ Another useful habit from the nineteenth century will be broken, giving the first to get there a huge advantage.”

Kenny also goes after a number of traditional baseball statistics and theories that he finds to be mostly hogwash. Things like the sacrifice bunt, ‘Errors’ tracking for fielders, the ‘Win’ and ‘Save’ statistics for pitchers, and ‘Batting Average’ as a primary tool to evaluate hitters all come under Kenny scrutiny.
In conclusion, if you haven’t yet read this book, what are you waiting for? The final judgment of my book review of “Ahead of the Curve” is that it is a must-read for every true baseball fan. Therefore, this is one of those rare books that will earn a lasting place in your personal baseball library.