The Los Angeles Dodgers punched their ticket to the Fall Classic with Saturday night’s 5-1 victory in Game 7 of the National League Championship Series over the host Milwaukee Brewers at Miller Park.

The Dodgers will now open the 2018 World Series at Fenway Park in Boston on tonight against the host Red Sox.
This is a return trip for the Dodgers, who a year ago advanced to the 2017 World Series. Los Angeles was edged out in seven games by the Houston Astros last October.
This also marks something of a return to baseball’s biggest stage for two key members of the 2008 Philadelphia Phillies World Series championship team, second baseman Chase Utley and relief pitcher Ryan Madson.
While Utley and Madson are under contract with and have played with the club this season, only Madson will actually be seeing action in the Fall Classic roster that was submitted today.
View image on Twitter 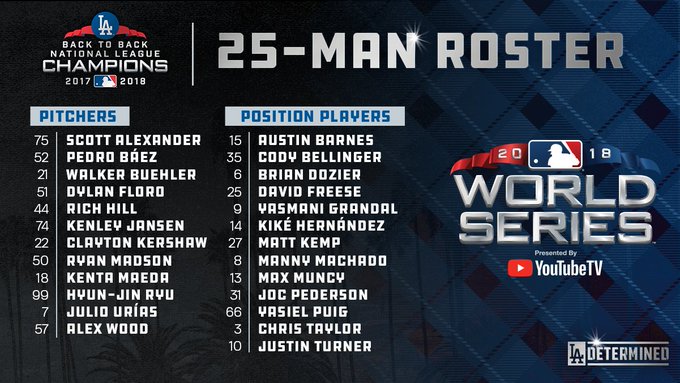 Here is the #Dodgers‘ 25-man roster for the #WorldSeries.

Twitter Ads info and privacy
Madson began this season with the Washington Nationals. He was dealt to the Dodgers on August 31, three days after his 38th birthday.
He would make nine appearances for Los Angeles in September and was particularly effective over the final two weeks of the season. Madson allowed just one run on two hits with seven strikeouts and no walks in five innings down the stretch as the Dodgers battled for a sixth straight National League West Division crown.
Madson was on the Dodgers roster and made two appearances in the NLDS win over Atlanta Braves. He was then included on the NLCS roster in the victory over the Brewers. All total, he has seven postseason appearances so far this year, allowing just one run on six hits over 6.1 innings across seven games with a 6/1 K:BB ratio.
Utley has not appeared at all in this postseason for the Dodgers, though he has been given credit by players such as Matt Kemp and Enrique ‘Kike’ Hernandez for helping them.
A decade ago, both Utley and Madson were pivotal players in their prime as the Phillies defeated the Tampa Bay Rays in five games to win the club’s second-ever and most recent World Series championship.
Over 13 seasons with the Phillies, Utley became the greatest second baseman in the history of the franchise. The six-time NL All-Star and four-time Silver Slugger Award winner received National League Most Valuable Player votes on five occasions. He will surely be inducted to the Phillies Wall of Fame sometime in the next few years.
Madson was with the Phillies for the first nine of the 13 big-league seasons thus far in his career. He tossed 630 innings for the club, the vast majority of those as a key arm out of the bullpen.
Madson appeared on the mound in 491 games with the Phillies, with 478 of those coming in relief. He made another 33 relief appearances for the Phillies in the postseason from 2008-11. In the championship-clinching victory over the Rays he was touched for a game-tying home run off the bat of Rocco Baldelli in the top of the 7th inning.
A truly remarkable comeback story, Madson was out of baseball with various injuries for three full seasons. He returned in 2015 in surprisingly dominant form, becoming a vital member of the Kansas City Royals bullpen and winning a second World Series ring.
Utley will turn 40-years-old a week before Christmas and has announced that this will be his final season as an active player in Major League Baseball. Madson has made no formal announcement. But his continuing effectiveness should allow him to catch on with a team for the 2019 season, should he so desire.
Time stands still for no one, and that includes our sports heroes. Utley – warmly remembered by Phillies fans as “The Man” for his heroics here – will be rooting on his current Dodgers teammates as the events of the 2018 World Series unfold without his direct participation.
No matter what happens as this October battle winds the 2018 season to an end, the two will always be cherished and feted in Philadelphia for their contributions to the Phillies teams of the 2000’s.