For more than four decades, the Phillie Phanatic has entertained fans of the Philadelphia Phillies, first at Veteran’s Stadium and now at Citizens Bank Park.

The Phanatic, as he is more simply and frequently referred to, also represents the organization on not only the broader baseball landscape, making appearances at numerous MLB and MiLB events, but also makes numerous non-baseball public and private appearances, including many at charity events.
In recent days, rumors have begun to spread that the Phanatic could soon possibly become a free agent.
As with a player, the Phillie Phanatic’s contract with the organization may be up, and he could conceivably take his services elsewhere. Or so those hyped headlines – including the one accompanying this piece – would have you believe.
What is the truth? What is really going on here? Could the Phillie Phanatic become the ‘Phoenix Phanatic” or the ‘Florida Phanatic’ or the, gulp, Dallas or Atlanta or New York Phanatic? Or just simply a broader free agent known as ‘The Phanatic’ free to go wherever he pleases?
Before we get into the current legal situation, a quick background on the history of the Phillie Phanatic.

BIRTH OF A FURRY, GREEN LEGEND

CLEARWATER, FL – MARCH 02: Managing Partner John Middleton high fives the Phillie Phanatic as he walks out moments before the press conference to introduce Bryce Harper to the media and the fans of the Philadelphia Phillies on March 02, 2019 at the Spectrum Field in Clearwater, Florida. (Cliff Welch/Icon Sportswire)
While his “official” biography says that the Phanatic suddenly appeared in South Philly from his native home in the Galapagos Islands, in reality he was the brainchild of former Phillies Director of Marketing Dennis Lehman and Promotions Director Frank Sullivan.
From the opening of Veteran’s Stadium in 1971 through the remainder of the decade of the 1970’s, a pair of characters named Phil and Phyllis, dressed in colonial garb, had taken on a sort of unofficial mascot role with the Phillies. Lehman and Sullivan wanted to come up with a unique character, similar to the controversial but popular “San Diego Chicken” character that had developed with the San Diego Padres organization.

Lehman and Sullivan approached Jim Henson, creator of the famous Muppets for Sesame Street, to help develop the original Phillie Phanatic costume. Henson directed them to  Bonnie Erickson of the New York firm known then as Harrison/Erickson, now Acme Mascots. Erickson had worked with Henson previously, creating the iconic Miss Piggy character among others. She would take on the assignment of creating the basic idea for the now iconic costume.
“I wasn’t aware of the game as much as I was aware of the fact that they must be coming to us for entertainment,” Erickson told Mike Rubin for the Victory Journal. “When they told me mascots, I went ‘Oh, really? I don’t know that I want that. That’s not what I want to do.’ But then I realized what kinds of crowds would be seeing this.”
An intern with the Phillies in those days, David Raymond, was chosen to take on the role of making the costume come to life. Raymond was athletic, a former football player at the University of Delaware. That athleticism was a necessity to carry and carry-on in the heavy costume on hot summer days at the ballpark. But also, Raymond’s mother was deaf. His experience communicating with his mother helped him to project personality without speaking.
“We wanted to try to suspend disbelief that there was a human being in there,” Wayde Harrison, Erickson’s husband and business partner, told Rubin. “We want the Phillie Phanatic to be the Phillie Phanatic. We don’t you to think, ‘Hey, there’s a guy running around in a big green costume.’”
In April of 1978, the Phillie Phanatic was introduced to the local fan base on the morning children’s television program “Captain Noah’s Magical Ark”, in an appearance with Phillies veteran catcher Tim McCarver. And on April 25, 1978 the fans at The Vet got their first look at the comical character.
The rest, as they say, is Philadelphia show business history.
An executive with the club at the time, Bill Giles approved the whole venture, hoping that the Phanatic would help lure more families to Veteran’s Stadium, even beyond the average baseball fan. Giles then made a fateful decision involving the character. As told by Daniel Craig at The Philly Voice in January 2016:
“They had offered Phillies executive Bill Giles the choice between paying $5,200 for both the Phanatic costume and the character’s copyright, or purchasing just the costume alone for $3,900. Giles opted for only the costume, a move he would describe in his auto-biography as “the worst decision of my career.” Five years later he paid $250,000 for the Phanatic’s copyright.
Dave Raymond would portray the Phanatic until 1993, when Tom Burgoyne took over the role. Burgoyne, who calls himself the Phanatic’s “best friend” in order to maintain the character’s personal as separate from himself, has filled the role ever since. 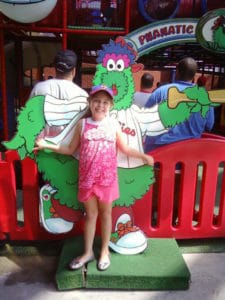 Like millions of other kids of all ages over the last four decades, Elysia Bellina grew up loving the Phillie Phanatic. (Matt Veasey/Phillies Nation)
But last June, Harrison/Erickson sent a letter to the Phillies claiming that under a section of the Copyright Act, they were free to terminate their 1984 agreement and negotiate a new one.
Smelling a rat, or at least a money grab, the Phillies filed a lawsuit against Harrison/Erickson in which the club claimed that they were actually co-creators of the costume. The suit claims that Harrison/Erickson thus cannot make a claim to the origination of either the Phanatic character or the costume.
In the legal action between the Phillies and Harrison/Erickson, there is a claim which basically states that if a new agreement is not reached, then the Phillies would not be able to continue use of the Phillie Phanatic in any way after June 15, 2020.
So, there you have it. That’s what is happening in reality. The Phillies claim to be co-creators of the Phillie Phanatic, and to have purchased the copyright to the character “forever” back in 1984. Harrison/Erickson says that it has the right to cancel that agreement and negotiate a new one.
Now, lawyers for the two parties will fight it out, and a court will decide the matter. That is, unless the two sides actually do find a way to hammer out a new agreement and reach some mutually acceptable out-of-court settlement. That is the most likely resolution.
Don’t expect the Phillie Phanatic to ever become a true free agent. It is, after all, the “Phillie” Phanatic. Beloved by millions in our area, the Phanatic has entertained generations of Philly sports fans as a uniquely identifiable symbol of the Phillies and the overall Philadelphia landscape. That is not going to change, in June of 2020, or any time that any of us will see in our lifetimes.
Originally published at Phillies Nation as “No way the Phillies could lose the Phanatic – or could they?“