For my money it has always been one of the two greatest defensive plays in Philadelphia Phillies history, both of which were made during situations in which the fielders were facing tremendous pressure.

It came during Game 5 of the 2008 World Series between the Phillies and visiting Tampa Bay Rays at Citizens Bank Park, and was started by Phillies second baseman Chase Utley, who will be feted on Friday night when he officially retires with the organization.
You may be able to look back over the history of this now 137-year-old ball club and find more spectacular or technically difficult plays. But it would be hard to find two that combine those aspects of difficulty and spectacle with sheer importance in a championship-level setting.
The players at the center of these two phenomenal defensive moments also just happen to be arguably the most popular players among the fan base in the entire history of the Philadelphia Phillies organization.

The first of those two greatest defensive plays came all the way back in the final game of the 1950 regular season, and was pulled off by Baseball Hall of Famer and Phillies Wall of Famer Richie Ashburn. There were no playoffs in those days. If you finished in first place, you won the pennant and advanced to the World Series.
On that Sunday, October 1 afternoon at Ebbets Field in Brooklyn, the Phillies were battling the host Dodgers. The two teams were tied at 1-1 into the bottom of the 9th inning. A victory by the home side would mean they would tie for first place, forcing a playoff for the National League pennant.
The first two batters, Cal Abrams and Pee Wee Reese, reached base against Phillies right-hander Robin Roberts. The future Phillies Wall of Famer and Baseball Hall of Famer had turned just 24-years-old the previous day, but was already the ace of the staff. But now he was in trouble, and the pennant was in jeopardy.
Next up for the Dodgers was their own 24-year-old future Hall of Famer, Duke Snider. On the first pitch, Snider sent a clean base hit into center field, where the 23-year-old Ashburn fielded the ball and came up firing.
Abrams never hesitated, rounding third and heading for home as the potential game-tying run. Ashburn’s throw to catcher Stan Lopata was true, and Abrams was out as he slid for the plate. For its importance at that moment, and for what happened next, Ashburn’s strike to the plate may still be the greatest defensive play in Phillies franchise history.
Roberts would intentionally walk the next batter, Jackie Robinson, to load the bases. With the pennant-winning run now in scoring position, Roberts proceeded to get Carl Furillo on a pop fly to first baseman Eddie Waitkus, then retired Gil Hodges on a fly ball to right fielder Del Ennis to wriggle his way out of the jam.
The game moved into the top of the 10th inning, where Dick Sisler would drill a one-out, three-run homer off Don Newcombe to put the Phillies up 4-1. Roberts set the Dodgers down in order in the bottom of the frame, and he was then mobbed at the mound by his ‘Whiz Kids’ teammates in celebration of just the second NL pennant in franchise history.
UTLEY’S DEKE
As stated earlier, this play by Utley took place in Game 5 of the 2008 World Series. The only reason that I rate it equivalent to the Ashburn play is that it actually took place in the Fall Classic, where plays such as this make the difference between winning and losing an actual championship.
The Phillies led the Tampa Bay Rays by three games to one, and were just a win away from only the second world championship in franchise history. This fifth game between the two teams had been suspended by torrential rains that spilled through the Philadelphia area for the last two days.
The visiting Rays were desperate for a win at Citizens Bank Park. It would give them life, sending them back home to Tampa trailing 3-2 in the series, but with the final two games in front of their home fans. 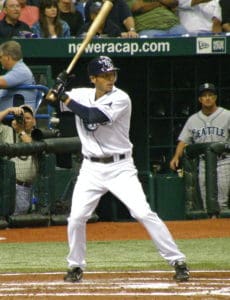 Jason Bartlett was a heads-up shortstop with the 2008 Tampa Bay Rays. His daring spring home in the decisive game of the World Series was overcome by Utley’s Deke. (imagesbyferg on Flickr)
In the top of the 7th inning, Tampa Bay right fielder Rocco Baldelli blasted a one-out solo home run off Ryan Madson to tie the game at 3-3. The following batter, shortstop Jason Bartlett, grounded a single to left off Madson. Bartlett was then moved up to second base on a sacrifice bunt, and he stood there as the go-ahead run with two outs.
Up to the plate stepped Rays’ leadoff man Akinori Iwamura. The 28-year-old second baseman had signed with Tampa Bay a year earlier after nine years playing professionally in his native Japan, and was a dangerous contact hitter. Phillies skipper Charlie Manuel countered by bringing in southpaw reliever J.C. Romero to face the left-handed hitting Iwamura.
Romero got in front with a strike. But on the second pitch, Iwamura connected with a breaking ball and grounded it back through the middle. Bartlett had a good lead and took off running. Off the bat, and even as it rushed towards center field, the ball looked like it was a base hit.
Utley was playing Iwamura in the hole, shaded towards first base, and was roughly twenty feet from the ball as it rolled through the infield. But the Phillies then 29-year-old, six-year veteran second baseman bolted smoothly and confidently to his right. He backhanded the ball, and in one motion made a jump-throw in an attempt to get the speedy Iwamura at first.
And then he didn’t. In a play that epitomized Utley’s uncommon baseball instincts, the Phillies second baseman never threw the ball to first. As he cross behind shortstop Jimmy Rollins and the second base bag towards the left field side of the diamond, Utley realized he had no play on Iwamura.
But then he spotted Bartlett breaking for home. In one motion, Utley deked a throw to first, turned on a hop, and fired a one-hopper that was a bit up and behind the third base line to catcher Carlos Ruiz.
The Phillies catcher fielded the ball and dove for Bartlett, who had taken off in a head-first slide attempt to the front of the plate. “Chooch” applied the diving tag to Bartlett’s outstretched shoulder, and umpire Jeff Kellogg stutter-stepped around the pair to pump his fist in the “out” call as the home fans at Citizens Bank Park exploded.
The play has become known by various names to Phillies fans over the years, most frequently as “Utley’s Deke”, even though it has to be pointed out that the fantastic play by Ruiz on the back end is often over-looked.
In the bottom of the inning, Pat Burrell would lead off with a booming double high off the center field wall in what would be his final plate appearance in a Phillies uniform. Two batters later, Pedro Feliz singled home pinch-runner Eric Bruntlett to put the Phillies in front by 4-3. In the 9th, closer Brad Lidge would strikeout Eric Hinske to end it, sinking to his knees where Ruiz, Utley, and their teammates would pile up as World Series champions.
As the Phillies remember and celebrate the many great moments of the brilliant 13 seasons spent by Chase Utley in a Phillies uniform, “Utley’s Deke” is sure to be front-and-center. It is my personal favorite play by “The Man”, and remains one of the two greatest defensive plays in the history of the Philadelphia Phillies franchise.
Originally published at Phillies Nation as “Chase Utley’s World Series deke is one of two greatest defensive plays in Phillies history“