Do data errors affect the results of the climate model? 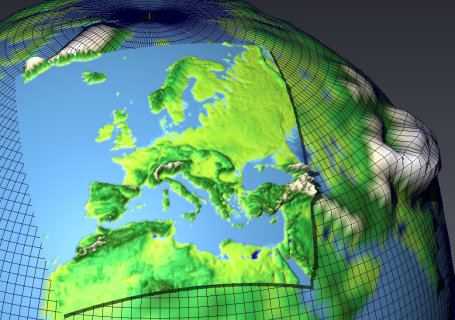 Assistance for the applicability in impact modeling

Climate models are simplified representations of reality. They are able to approximately describe large-scale processes in the atmosphere. Small-scale processes, on the order of magnitude smaller than around four lattice boxes, can only be recorded using approximation methods (technical term: parameterizations). The combination of processes not at all or only approximately described with further model errors can lead to systematic errors in the description of the regional climate. A distinction must be made between two causes.

If the consequences of climate change are examined with the help of impact models, RCMs usually provide the meteorological input data. There, such systematic errors can lead to incorrect conclusions about the expected effects of climate change.

A defined reference point is required to calculate a systematic error. Measurements at meteorological stations and measurements using remote sensing methods are used for this purpose. It is important to note here that data from these two sources can also be subject to errors, which is why it is more precise to speak of deviations between model and observation and not of pure model errors. Most of the measurements are also representative only for one measuring station and not for a large lattice box; this applies in particular to precipitation, which can vary greatly over small distances. The transfer of such station measurements into a grid box structure corresponding to the models is also prone to errors.

With the availability of measurements as a description of the observed reality, the type and size of the systematic deviations can be determined. This information serves as the basis for all empirical-statistical error correction methods (in short: "bias correction"). Corrections are subsequently applied to the results generated by the model. If possible, this should be done on the basis of at least 30-year time series, since shorter time series are strongly influenced by climate variability. Different approaches to bias correction are described in e.g. Maraun et al. [2010], Hagemann et al. [2011] and Themessl et al. [2011] and Maraun [2016] are described in detail.

Simple bias correction procedures consist in correcting systematic deviations additively (e.g. temperature) or multiplicatively (e.g. precipitation) [e.g. Déqué, 2007]. An alternative approach is to compare rankings in the observation and model datasets. In recent years, methods have been developed on this basis that aim to align the modeled and observed empirical cumulative density function (technical term "quantile mapping", QM), which is very powerful compared to other methods (Themeßl et al., 2011). QM is therefore a correction method that has recently been widely used; some applications are described in the work of Déqué [2007], Piani et al. [2010], Themeßl et al., [2011; 2012], Dosio and Parulo [2011] and Piani and Haerter [2012]. Typically it is possible to reduce errors in the mean values ​​very strongly with the help of QM. In addition, QM not only corrects mean values, but also the variability of daily time series and the form of frequency distributions. QM is very flexible and can be used not only for temperature and precipitation, but also for other meteorological elements such as global radiation, wind speed or relative humidity [Wilcke et al, 2013]. However, bias correction only makes sense if the quantity simulated by the RCM has a strong relationship with the measured quantity.

The methods described and used in the literature are diverse. It is essential that the bias corrections carried out by the working groups are well documented with regard to their assumptions and implementation. A particular methodology may be very effective for a specific application area, but unsuitable for another. In the case of bias correction, too, the stipulation applies to first check which suitability the selected methodology is for one's own area of ​​application. This text is intended to contribute to this. Additional critical notes are, for example, in Ehret et al. [2012] and Maraun [2013]. A comparison of QM methods from the point of view of users is given by Gudmundsson et al. [2012].

A fundamental assumption when applying bias correction is the temporal stationarity of the characteristics of the model errors. This stationarity is limited due to the climate variability and it is not always clear, even with long time series, whether a difference between the model and reality is a real error or just a consequence of the climate variability. This is especially true for precipitation in arid regions [Maraun, 2012]. This restriction significantly limits the success of the correction, especially if the correction is applied to periods far in the future. Recent studies show that bias correction can be successful even for simulations of the relatively distant future at the end of the 21st century [Maraun, 2012], but to a lesser extent than simulations of the current climate or those of the near future. In general, it can be said that similar restrictions apply for bias correction with regard to the temporal stationarity as for statistical climate models.
See chapter "Statistical Methods in Regional Climate Modeling"

Usually bias correction is carried out individually for each meteorological element, which can lead to physical inconsistencies. If, for example, only the temperature is changed, there would be a change in the water content in the atmosphere while maintaining the values ​​of the relative humidity. In this respect, it is not advisable in many applications to mix corrected and uncorrected values ​​or to severely disrupt the relationships between different meteorological elements by means of bias correction.

Furthermore, a simple bias correction is neither energy nor mass conserving. If, for example, the total precipitation were reduced by 30% as part of the bias correction, this would be equivalent to removing water from the system. However, the RCM was not aware of this reduction during its course. Gross systematic errors in global models, such as a shift in the westerly wind zone, can generally not be remedied in a meaningful way by means of bias correction. In this case, bias correction can lead to inconsistencies [Eden et al., 2012]. At the moment there is no research into the consequences of such a bias correction.

Climate models simulate area mean values ​​for a grid box. An RCM precipitation value can therefore represent different precipitation patterns within the grid box. This random element cannot be generated by QM and other bias correction methods - only systematic errors can be corrected. If QM is used to downscaling precipitation from an RCM grid box to a measuring station, area-aggregated extreme events and dry days are overestimated [Maraun, 2013]. As a possible solution, Wong et al. [2014] proposed a stochastic bias correction.

Influence on the climate change signal

Studies such as that by Christensen et al. [2008] show that the bias depends on the meteorological situation and that bias correction can have an influence on trend behavior, especially if the corrections are made for a specific range of values. This can lead to both a moderate increase and a decrease in climate change signals [Boberg et al., 2012; Dosio et al., 2012]. Maraun [2013] shows that if QM is used as a regionalization tool, trends can be falsified. In general, a distinction must be made between two cases: If there is confidence in the climate change signal simulated by the climate model, a bias correction should be carried out that does not affect the climate change signal. If there is no trust, it must be checked in each individual case whether a bias correction might improve this signal [Gobiet et al., 2015; Maraun et al., 2016; Maraun, 2016]. If this is not the case, each result must be interpreted carefully and, if necessary, classified using expert knowledge.

Bias correction is not a closed field of research. There are a number of methods and the need for an updated and expanded overview-like presentation of the specifics, assumptions, advantages and disadvantages, such as those in Themeßl et al. [2011] is included. Current promising developments include multivariate methods, the transition from deterministic to stochastic methods [Wong et al., 2014] and process-based methods [Walton et al., 2015].

Gobiet, A., M. Suklitsch, G. Heinrich (2013), The effect of model errors on expected climate change and its uncertainty in multimodel ensembles: Theoretical considerations and application to regional climate simulations over Europe, submitted to J. Climate.