Where is the linear output transformer used

The human ear can detect frequencies in the range from 20 Hz to 20 kHz. The sensitivity to high frequencies decreases sharply with age. If LF transformers are used for the transmission of audio signals, the working bandwidth should be at least 20 kHz. For hi-fi loudspeakers, DIN 45500 requires a transmission range of (50 ... 12500) Hz. LF transformers are used especially in 100 volt PA systems to adapt the amplifier output to the different powers and impedances of the connected loudspeakers.

Transformers (line transformers) for energy transmission are operated up to the saturation limit of the ferromagnetic core. This working area includes the non-linear characteristic curve of the core, so that they are not suitable for undistorted audio signal transmission. The transmission on a curved characteristic creates undesirable harmonics, the signal sounds distorted. The degree of distortion is measured as the total harmonic distortion.

For LF transformers, special iron alloys are used for the core material. If the transducers are operated with a lower magnetic flux density, the working range remains limited to the straight-line part of the magnetization curve. If only a quarter of the power is transmitted in comparison to the mains transformer, then the signal distortions are also minimal. If a high output voltage is required, the number of turns must be quadrupled when the flux density is halved.

The output signal of a single-ended amplifier has a direct voltage component. If the primary coil of the transformer is also the working resistance in the output circuit of the amplifier, the direct current will magnetize the core. It can get into magnetic saturation, whereby the signal transmission is strongly distorted. If the magnetic core is not completely closed, as is the case with mains transformers, but is provided with an air gap, this reduces the magnetic flux and thus the signal distortion. The characteristics given by the manufacturer provide information about the tolerable level of direct current load.

Equivalent circuit diagram of a transformer as a two-port

In the simplified ESB of a transformer, the wire resistances of the windings and the core losses are shown as real resistances. The eddy currents and magnetic reversals are summarized in the core losses, which are then converted into heat. The shunt inductance L1 stands for the magnetization of the core and the longitudinal inductances for the magnetic leakage flux. All values ​​on the secondary side are converted to the primary side using the transfer factor, the turns ratio. The ESB then manages without an ideal transformer and therefore does not show the galvanic separation between the primary and secondary circuit. The real transfer factor is less than 100% and depends on the coupling factor k or the scatter factor σ. 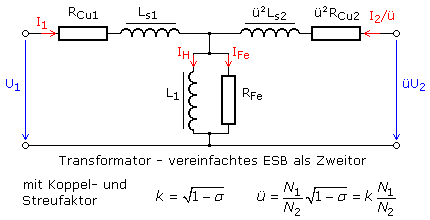 When transmitting low frequencies, the influence of some elements can be neglected. The magnetization reversal in the core takes place slowly and generates less heat loss. The reactance of the shunt inductance is low and determines the magnetizing current. The reactances of the series (stray) inductances are very small. The iron (core) loss resistance as well as the leakage flux can be neglected.

When transmitting high frequencies, the reactance of the shunt inductance is high and thus the shunt current is negligibly small. The wirewound resistors and the reactive resistances of the leakage inductances form a series connection. In the middle frequency band, the wired resistors and reactive resistors are involved in the transmission losses. Since the reactance of the leakage inductance increases proportionally with the signal frequency, the transformer in the high frequency range acts like an ideal transformer with an upstream choke coil. The influence of the wire resistors can then be neglected.

With special arrangements between the primary and secondary windings, the leakage flux can be kept small, even when transmitting large amounts of power. As a result, the leakage inductance and attenuation remain small at high frequencies. LF transformers with a very low lower limit frequency achieve the necessary high values ​​of transverse inductance only with large core cross-sections or special core materials.

In many applications, low-frequency transformers are used for impedance matching, with the advantage of galvanic isolation of the components involved. Loudspeaker systems with different impedances and powers can be adapted to the output power of an amplifier and its internal resistance with the help of suitable transformers. Transmitters for adaptation can also be installed in microphones and between the audio processing components.

If the transformer is also the working resistance of the power amplifier, as was (is) usual with tube amplifiers, the relatively high output impedance of a few kiloohms must be adapted to the low value of the loudspeaker system to be connected. The low value between 4 and 16 ohms would otherwise virtually short-circuit the useful AF signal. The impedance matching of the transformer takes place alternately with the square of the transformation ratio. The picture shows the conditions of a transformer used in the consumer industry.

In your own home, suitable loudspeaker boxes are almost always connected directly to low-impedance amplifier outputs. For example, a 100 W loudspeaker box with 4 Ω can be operated with an optimally power-adjusted output on a 100 W amplifier with an output impedance of 4 Ω per channel. Two 50 W boxes, each with 8 Ω impedance, can also be connected in parallel with full power output. With this low-resistance operation, a signal current of up to 5 A flows in the supply lines. If the line losses are not to exceed 10%, their resistance may not exceed 0.4 ohms. The cable cross-section must be correspondingly large or the cable length short enough. A 1.25 square millimeter copper line achieves this value with a total length of 14.5 m.

In the energy distribution network, power is transmitted over long distances with relatively small cable cross-sections, largely without loss, thanks to high network voltages. In principle, the ELA technology works the same way. Based on the example above, with the same power transmission of 100 W at 100 V, only 1 A signal current flows, so that with the same line cross-section and 10% loss along the line, it can be 25 times as long. For PA systems there are amplifiers with one or more 100 V outputs. The output voltage of a low-impedance amplifier can be brought to 100 V with a suitable transformer at maximum output power. Each connected loudspeaker has its own transformer, which adapts the 100 V to the lower value of the loudspeaker system's power and impedance. The following figure shows how loudspeakers of the same and different power are connected to a 100 V system until the maximum power of the amplifier is reached with the sum of the individual powers. The calculated values ​​are rounded.

The transformers of the ELA technology often have several designated taps on the primary and secondary side for different powers and impedances. Expansion and changes to existing systems are made easier because the connections only have to be reconnected accordingly. The volume of individual loudspeakers can be adjusted further by installing adjustable wire potentiometers on the secondary side. If a loudspeaker in the PA system fails with interruption, the other acceptance points are not affected due to the parallel connection. If there is a short circuit in a loudspeaker, the transformer will become magnetically saturated and the wire resistance of the secondary winding will be transformed to the primary side with the square of the transfer factor. The primary current of this transformer remains limited and does not overload the entire system.