Why do people believe in capitalism

With the Enlightenment, the economy changed from an "animated" to a soulless one. The prevailing spirituality in the old Christian world, i.e. the idea of ​​a spiritual connection to a higher, divine order, dissolved. The hope of being compensated in heaven for a more or less poor life was exchanged for the option of achieving salvation in life itself: Unlimited growth and a steady increase in the standard of living were supposed to bring paradise from heaven to earth. But now this belief has also been lost ...

When Adam Smith spoke of the "invisible hand" that controls the markets, he was referring to the hand of God. Economists disagree as to the extent to which this may be true, but mainly because the birth of modern capitalism, of which Adam Smith is the forefather, seems strange to many - because capitalism is a rational, efficiency-oriented event. Ultimately, however, one forgets with such an approach that the natural order that Smith assumes for the balancing markets is a metaphysical remnant of a theological world in which God created and ordered everything. Every order is still the order of God. Or, partially explained, that of nature. But the order of nature, in turn, is that of God (even with Isaac Newton, with whom Smith was friends).
The Enlightenment works out a secularized worldview in which history (like natural history) can operate independently - without the order and direction of God. The historian Reinhart Koselleck speaks of the Sattelzeit (around 1800), during which epochal changes take place. Since then, the world has been explained as a process that takes place in the indefinite and open. She is no longer through a plan of creation (oeconomia divina) predetermined (providentia), i.e. unfinished or upgradeable. The point is no longer to ponder what God has foreseen, but rather what people are doing with the world. We then talk about progress.
Adam Smith defined progress in economic terms: as growth with the aim of increasing the standard of living. The poor life of all should be materially improved. The new economy, which was only called capitalism in the 19th century, is characterized by increasing productivity. The "wealth of nations" is increased wealth, achieved through free markets and division of labor. Smith was certain that the Western virtue program could not have spurred this development:

"Prosperity vs. virtue" was his formula in the Lectures on Jurisprudence. In order to achieve wealth, we would have to (more) forego virtues.

But even more is changing: the new political economy capitulates itself on material well-being, the old theological world, on the other hand, on the soul. Life was more geared towards carrying it out in a godly manner, so that the soul might go to heaven - as the highest good. All earthly riches were of no use: It was an "oikonomia psychon" - an economy of the soul.
Let us stay with this thought for a moment: God, the Lord, appears as a householder oeconomia divinathat Novalis could still call the "universal household of God". This is where old occidental resources are at work: housekeeping (oikonomia), which the householder (pater familias, oikosdepotes) is incumbent. Theology - shaped by the teaching of the Apostle Paul - adopted this motif for creation: an economy of creation (almost unknown to us today) that was valid until the Enlightenment. To fit into this economy of creation was the duty of humility for every Christian. It was linked to the promise of redemption in heaven (alternatively: damnation in hell). That in the depths of Christianity there is another one that is not dominant soma / psyche (Body / soul) transformation is woven in (the God who sacrifices himself for people in the form of Jesus - not a ruler, but a merciful), just remember. 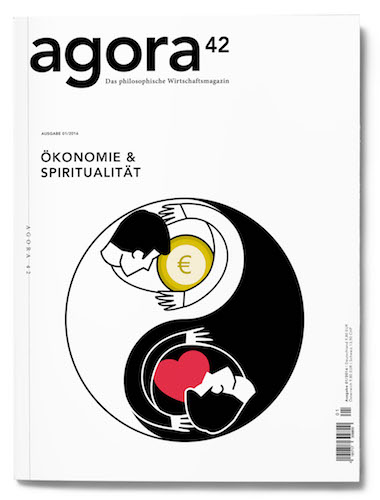 This article comes from issue 1/2016 ECONOMY & SPIRITUALITY of agora42:

“All the diffuse terms that we are trying to find again and again for the systemic turmoil of our time - capitalism, neoliberalism, consumerism - but only moderately cleverly hide the fact that in their hidden promises of salvation we are deeply anchored in ourselves and expressly religiously tinged longing seek to satisfy. Or were looking for ... "

This edition is available in the online shop.

Capitalism has taken on the function of redemption, but now not for the economy of souls, but for the economy of material life. The soul part was eliminated from the economy, but not the hope of salvation. However, the time frame had to change fundamentally for this. Death was no longer understood as a phase transition into heaven, which lets the souls live forever, but as a definite end. Everything earlier on the position post mortem was aligned, must now be accomplished in the (short) life. Eternity was ended, but history was opened with a potentially eternal future of world time. Only in such an open future can growth, progression and increase be formulated. To do this, you have to be productive in life. If life is a life towards death, all that it can offer must be extracted from it; Almost logically, this results in a maximization requirement.

At the end of the 19th century the “rational man” was invented, which optimizes its marginal utility. Marginal utility means: up to the (physical) saturation limit. The soul is not served by this (economic) system, it was left to the (now private) faith.

The vacuum created in this way was filled by adding the psyche to the physical-worldly part. In contrast to the soul, the psyche dies with the body. In principle, the essence of the psyche is no longer different from the body: Ultimately, it is about satisfying its needs. Even the psyche is limited to its cognitive operations, the unconscious is excluded. Yet, despite all the rationalization, faith and hope have not disappeared. They translate into the historical goals: growth, an increase in the standard of living of individuals and nations, and progress are unlimited. Assuming that the economy can grow (potentially indefinitely), it follows that firstly, in principle, all current “barriers to salvation” can be removed and, secondly, that these barriers even represent welcome challenges from which new growth results.
The literary scholar Joseph Vogl speaks of a system of oikodicy - Leibniz's concept of theodicy appears in it. Leibniz wanted to prove that creation is good, even if human suffering increases. Earthly suffering is a test - a chance to prove one's faith and find redemption accordingly in heaven. Vogl transfers this idea to the capitalist system: Poverty, crises and losses are only confirmation of the basic growth potential. You just have to really want to grow! We are moving again in a system of belief, in a metaphysics of capitalism, as Norbert Bolz calls it.

This optimism about growth is viewed with increasing skepticism. The doubters point out that we are reaching our limits in every conceivable way (environmental destruction in all its facets, global warming, etc.). And they pose the question of how to generate unlimited growth with limited resources. Belief in the oikodicy evaporates; many no longer expect capitalism to increase, but at best to preserve what has been achieved so far (steady state economy or sustainability). We realize that we tied growth to the exploitation of natural resources. We now know that they are very limited. And not only that: Their excessive use generates feedback processes that hit us back at a cost. We rely on the sciences to bring about a "growth of boundaries". But some processes like climate change are irreversible and therefore limiting. The hope that nature will incessantly give us its “fruits” is reversed into the sober analysis that nature carries out its own processes in which our wishes and our desires do not play a role.

In the economy we only speak of the material side of the economy, of energy, resources and goods. The psychological costs are not included in the performance balances of the increase-redemption economy (the psychological ones anyway not): work, organization, productivity, innovation and dynamism have reshaped societies in such a way that many people are psychologically overwhelmed, their individual perspectives are lost.

In addition, no one can seriously hope for a more ecological, more sustainable economy. Because such a transformation would have to happen on a global scale. However, the emerging markets reserve the right to follow the same growth paths that we have historically followed. They share any ecological concerns; But only when they had reached our standard of living would the same conditions prevail and one could agree on an ecological and climate policy that is binding for everyone. If these expectations do not change, future climate conferences will necessarily fail. Even if we give good reasons for such a global reorientation of the economy, our own history has taken a corresponding reorientation out of our hands. Because this story has become a model for others who want to repeat it (precisely because it was so successful).

Against these insights, we still believe in a version of the continuation of this story - albeit within the framework of ecological calibrations. You can see the tremendous faith potential with which we operate: salvation through knowledge, science and technology. This is a further sign that we no longer trust politics, but only the power of redemption of our knowledge (although in view of the confusing situation we don't even know what knowledge we actually need). At the same time there is a new "invisible hand". Nobody interprets this as "divine" (although many people become religious again in view of the complexity of the world and the resulting desire for simple solutions). But it is functionally equivalent to “creative power”, only that today we would call it “human-creative”. We have not yet left the scheme of salvation; a second clarification is still pending.

We have traded the hope of being compensated in heaven for a poor life for an option to attain salvation in life itself. But what if that doesn't work?

When we no longer have a heaven / soul option, we have to go to therapy (which has itself become a market achievement). That is, we have to deal with it individually, without the institutional offers of salvation from the churches or the belief system. The hope of changing the economy so that we can live in it undamaged - the real promise of the religion of capitalism - has perished with the socialist utopias. So do we have to say goodbye to hope of salvation altogether? Or will we succeed in designing an economy that balances material and psychological goods? What would a hypermodern "oikonomia psychon" look like?