Why do cells divide in our body

What is the human body made of?
Around two thirds of our bodies are made up of water, the rest of a complicated mixture of water and chemical compounds. This mixture is in tiny structures called cells. They can only be seen with a microscope.

What is a cell? 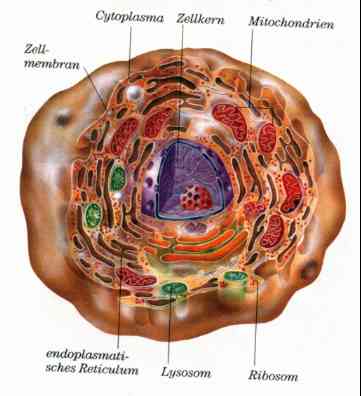 Cells are the tiny building blocks of the body. They mostly consist of a jelly-like substance, the cytoplasm. They are surrounded by a membrane, the cell membrane, which allows nutrients to penetrate and waste materials to escape. Cell activity is controlled by the cell nucleus.

How many cells do we have in our bodies?
There are about fifty thousand billion cells in the human body. Every second, millions of body cells die and are replaced by new ones.

What happens in a cell?
In the cytoplasm are the organelles, tiny bodies that each perform very specific tasks. The material for growth and repair (proteins) comes from small grains, the ribosomes, for example. Some of them are attached to a folded membrane called the mendoplasmic reticulum. Round organelles called lysosomes contain chemicals that break down dangerous substances and used cell parts.

What is in the nucleus?
The cell nucleus is the control center of the cell. It contains 46 molecular threads, the chromosomes. Each chromosome carries instructions on what tasks the other components of the cell should perform.

How long does a cell live?
Some cells only live a few days, others for many years. Some of the cells that line our intestines die after a day or two, bone cells after 15 to 20 years. Most of the dead cells are replaced by new ones, only the nerve cells are not.

Do all cells look the same?
Although all cells have common properties, they do not all look the same. There are several hundred different types of cells in the body. Shape and size depend on their task ~ Nerve cells are long and thin because they transmit messages between parts of the body. The cells on the inside of the mouth are round and flat because they are pressed together to form a protective layer. Red blood cells are divided so that they can bind as much oxygen as possible and transport it through the body.

Why do cells divide?
Cells divide when they can no longer grow. Most of the body grows through cell division.

Which is the largest cell?
The largest human cell is a woman's egg cell. Their diameter is about 0.2 millimeters; that's a little less than the period at the end of this sentence. The longest cells are the nerve cells in the legs. They are very thin, but up to three feet long, and carry messages from the spinal cord to the feet and back.

How small is the smallest cell?
The smallest are the red blood cells with a diameter of 0.01 millimeters. The man's sperm cells are also very small: their head measures around 0.005 millimeters.

What do cells need to live?
Cells need three things to live: food, oxygen, and an aqueous environment with the right mix of chemicals. This is the only way they can fulfill their tasks. The cells also excrete waste materials in this liquid environment.

Where do the cells get their nourishment from?
The blood supplies the cells with oxygen and nutrients. It removes waste and supplies vital tissue fluid.

What is a tissue?
Any collection of cells that work together to perform a specific task is called a tissue. Most of the body's cells are grouped into tissues. An example of this is nerve and muscle tissue.

How many types of tissue are there?
There are dozens of tissues, but most belong to four main groups: The skin tissue, or epithelium, covers the outer and inner surfaces. Connective tissue connects the parts of the body and holds them in place; bones are also a type of connective tissue. The other two types are the muscles and the nerve tissue that is found in the brain, for example.

What is an organ?
An organ is a structure made up of several tissues that together perform a specific task. For example, the heart contains skin, nerve and muscle tissue, and the whole is held together by connective tissue. Together, these tissues pump blood around the body. The eyes, brain and liver are also organs.

What is an organ system?
Most organs do not work independently of one another, but rather they belong to organ systems. The intestines, liver and pancreas, for example, as the digestive system, collectively utilize the food we eat and extract useful substances from it. The lungs and airways make up the respiratory system, and the heart, blood vessels and blood make up the circulatory system.

How many organ systems do we have?
Humans have nine organ systems. The skeletal and muscular systems provide support, protection and movement. The nervous and endocrine systems coordinate the body's activities. The circulatory system transports blood through the body, the breathing system is used for gas exchange. In the digestive system, food is broken down, the excretory system removes waste, and the reproductive system is used to reproduce.

What is an organism?
The totality of the various organ systems forms the human organism.

What is a gland
A gland produces a fluid that the body needs to function properly. Some organs, such as the liver and adrenal glands, are glands. But there are also tiny glands, such as the sweat glands in the skin and the salivary glands in the mouth.

What are limbs?
Limbs are arms and hands, legs and feet.

What is slime
Mucus is a sticky liquid made by glands in the mucous membranes. It arises, for example, in the mouth, in the intestines and in the airways that lead to the lungs. Slime protects these delicate surfaces from damage.

How can you see inside your body?
With probes and other instruments one can "look into" the body without having to open it. X-rays, ultrasound and radioactive marking substances are also used. You can also examine tissue samples with a microscope: it enlarges the cells so that you can look at them closely.

What is the metabolism?
Metabolism is the totality of the processes in the body. This also includes the chemical reactions in the cells that generate energy and raw material for growth.

What are enzymes
Enzymes are special proteins that speed up chemical reactions in the body. There are thousands of different enzymes. The best known are the digestive enzymes that break down food in the intestines.