What is hybridization in benzene

The benzene molecule could be described as a cyclohexane molecule with three conjugated C = C double bonds: 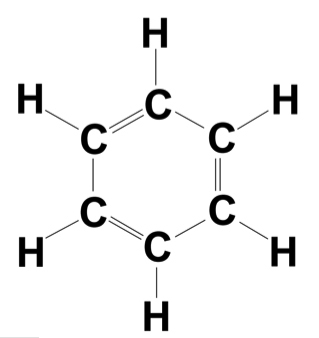 Too bad that all experimental findings speak against this representation. We would like to take a closer look at two of these findings here.

Two findings that speak against a cyclohexane with three double bonds:

How can one explain this strange behavior of benzene?

We had seen that a C = C double bond consists of two different covalent bonds. When the sigma bond is formed, two sp2-Hybrid orbitals of the two carbon atoms. This covalent bond is very strong because the sp2-Orbitals overlap quite strongly due to their spatial structure. 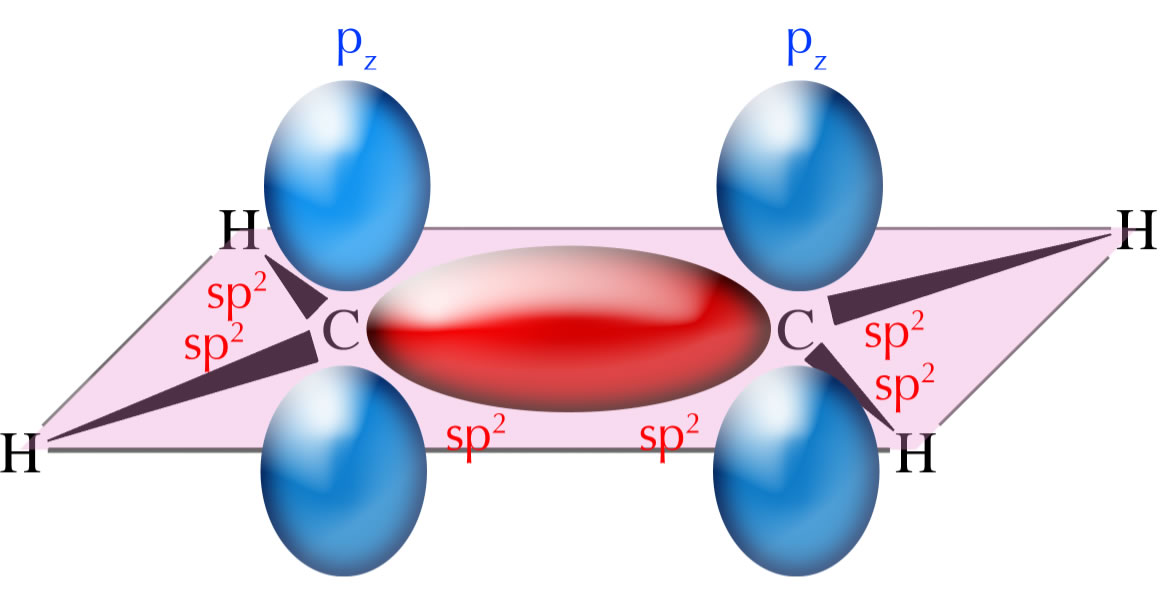 In the figure, this sigma bond is shown in red. Now pay attention to the p orbitals in the diagram. The two pz-Orbitals of the two carbon atoms protrude upwards and downwards from the plane drawn. Now an orbital is defined as a "living space for electrons" and actually has no sharp boundaries. There is also a (very low) probability of encountering an electron outside of the orbital shown. Therefore, one can also let the two p orbitals overlap, as shown in the following picture: 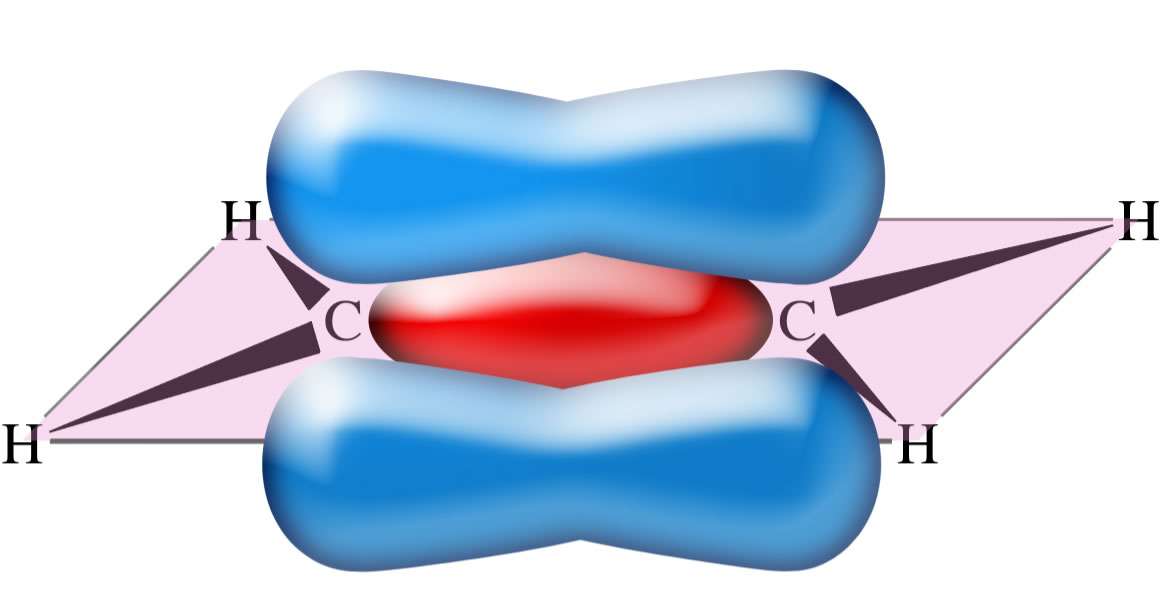 However, this overlap is very weak, much weaker than with the sigma bond. This weak covalent bond is called the pi bond.

The C = C double bonds between the carbon atoms 1 and 2 as well as 3 and 4 are shown here according to the spherical cloud model, the binding spherical clouds have the shape of a banana. But now we know better. Each of the four carbon atoms is sp2-hybridized, and the four pz-Orbitals protrude upwards and downwards from the drawn plane:

You might think: "Great; we have two times two pz-Orbitals, so two double bonds will also be formed ". The graphic representation of the butadiene molecule might then look like this:

This representation with two single double bonds is wrong! Also the pz-Orbitals of carbon atoms 2 and 3 can overlap:

Here I am gradually reaching the limits of what is (for me) possible with my graphics program (Photoshop CS4).

You need to get the overlapping pz-Orbitals as a unified space for the four electrons of the pz-Imagine orbitals. The four electrons can move freely within the upper and lower orbital lobes; their whereabouts can no longer be localized, which is why these electrons are also called delocalized electrons. 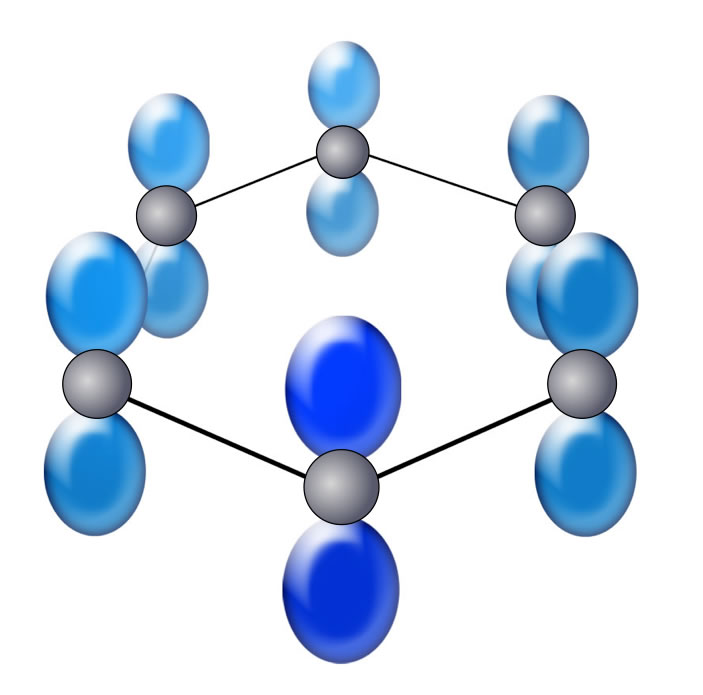 These six pz-Orbitals now unite to form a ring above the level shown and a ring below this level. The six electrons can move freely in these two rings, they are delocalized.

The overlap of the pz-I have not "managed" orbitals with Photoshop, so I will forego a corresponding drawing here. 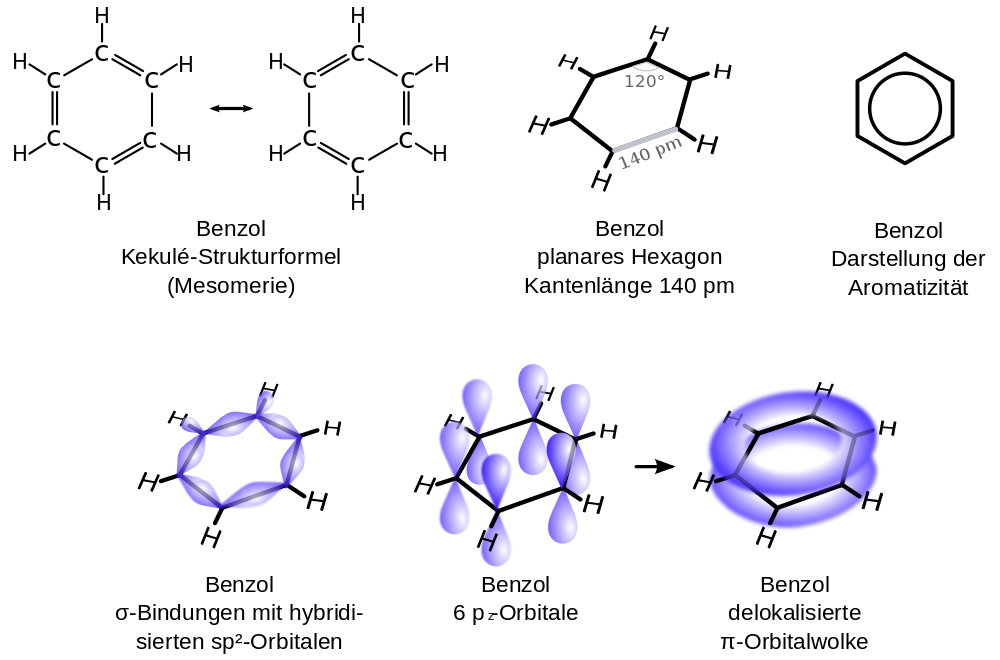 But here we see a nice drawing that was published by Roland.chem under the Creative CommonsAttribution 3.0 Unported license in the benzene article of the German Wikipedia.

Now back to the

Findings that speak against a cyclohexane with three double bonds:Same bond lengths

Let's start with the second finding. There are no C-C single bonds and also no C = C double bonds in the benzene molecule. The pi bonds result from the overlap of the six pz-Orbitals. The six pi-electrons stay in a ring-shaped space above and below the plane of the ring, they are delocalized. Therefore, all six C-C bonds in the benzene ring are equivalent and then also have the same bond length.

No discoloration by bromine water

That's true, but in reality it's a little more complicated. Benzene could undergo electrophilic addition, but then the aromatic character of the benzene molecule would be destroyed. The aromatic character is enhanced by the overlapping of the six pz-Orbitals caused. Because the six pi electrons are delocalized over the entire benzene ring, this state is particularly low in energy. Electrophilic addition would result in two of the sp2-hybridized carbon atoms back into the sp3- switch hybridized state. The SP3-hybridized carbon atoms would then have no pz-Orbitals more, and the space of the remaining four pi-electrons would be severely limited, it would then be the same as that of butadiene. This state is energetically quite unfavorable, and that is also the reason why benzene and related aromatic compounds are very reluctant to undergo electrophilic addition.