Is overrated rank 1 on Google

The 2013 ranking factors for Google Germany

It is finished. After weeks of aggregating, evaluating, analyzing, processing, interpreting and the corresponding graphical implementations, they are finally ready: The Searchmetrics Ranking Factors 2013 for Google Germany, also known as the Ranking correlations 2013 (just sounds stupid). For those who are hasty, here is the link to the study: www.searchmetrics.com/d2013 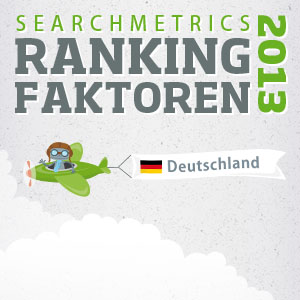 Again we evaluated the first 30 search results for 10,000 keywords and analyzed 300,000 websites for them. We not only analyzed the top keywords, but also largely filtered navigational searches, i.e. brand searches, in order to achieve a better result. The result was 150 gigabits of data for all titles, descriptions, links, content, etc. - together with several billion backlinks, Facebook likes and shares as well as millions of tweets and PlusOnes. In short: We have once again examined a very large, fresh database to show you what the top URLs in the Google SERPs have in common and what distinguishes them from the poorly ranking pages.

Trends over the previous year and many new factors

We have significantly expanded our pool of factors compared to the previous year. In addition to an annual comparison of the development tendencies already known from 2012 correlations, additional attributes now enable an even deeper analysis of the areas Onpage content, On-page technology, Backlinks and Social signals. Incidentally, the evaluations already contain findings after the Penguin 2.0 update.

And again, at the beginning, the difference between correlation and causal connection should be clearly pointed out. A high correlation of an examined factor does not necessarily mean that this factor causes a better ranking on Google - but that, on average, more well-positioned pages have the property described by this factor, but not worse-placed pages. This also means that there are correlations that seem unimportant (often on-page) because they are low, but are actually essential. To do this, however, you have to read the whitepaper.

The ranking correlations in the overview

The underlying approach for the calculation is - as in 2012 - the Spearman correlation, with which the corresponding average values ​​are related across the ranking position depending on the tendency. The following overview can therefore be read as: “The better the ranking of a page, the more likely the factor hits on average X to." - and the higher / lower the value of the factor X is pronounced - the greater / smaller are the differences in this regard across the search result positions 1-30. 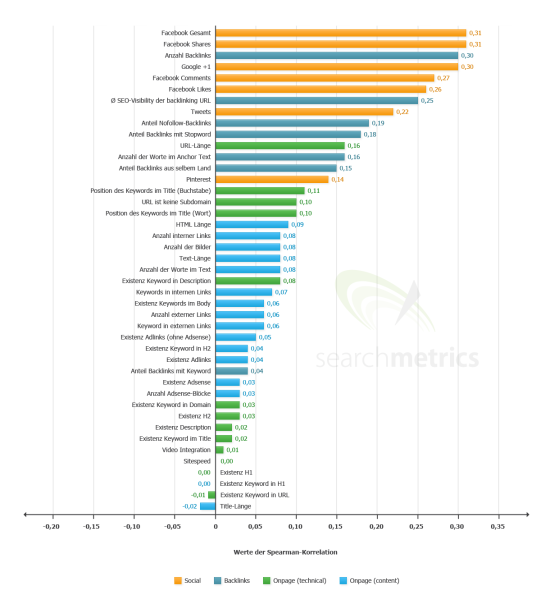 At first glance, links seem to be important, as do social signals, while on-page factors show slightly lower correlations. But as I said, be careful when interpreting the correlations too hastily. Factors with less pronounced correlation values ​​could also be important, if not a basic requirement for rankings (as I said: on-page).

You can find a more in-depth analysis of this on our more detailed article, in which the study can also be downloaded as a white paper in PDF format:

There are more graphics, details and the more detailed results - and of course the entire study, which is around 70 pages long.

The most important details at a glance

Here are the most important results of our study at a glance:

However, it is not just the quantity, but also the quality of links that differentiates well-ranking pages from poorly placed ones. A “natural link profile” and “diversity” are the key words here. These are also observations that many share - at least since the Penguin updates. Therefore, the analysis is once again a confirmation of this.

Keyword domains and the “keyword in the URL” factor seem to have been devalued by Google. A year ago, these factors had positively (more) correlated with better rankings.

With regard to the content of pages, factors such as “text length” and “number of images” correlate positively with better rankings. But here the scale does not seem to be open to the top. So even more text does not mean an even better position.

A good technical page structure is still a basic requirement for rankings in general. The existence of the keyword onpage remains important.

That doesn't necessarily mean that social signals are a ranking factor. But URLs in top positions have significantly more social signals - that's a fact. It is also a fact that several studies have proven the influence of social signals on rankings. Analyzes in the USA and Germany came to the same conclusion.

For branded sites, some factors seem to apply to a different extent than for non-brands. In any case, brands differ on average from other sites in the severity of some factors.

So much for the short form of the study. As mentioned, a more detailed summary with graphics can be found under www.searchmetrics.com/d2013.

The infographic on the ranking factors 2013

Last year it was very popular - and so this year we have again developed an infographic with the most important statements on the ranking factors for 2013. And this is how it looks: 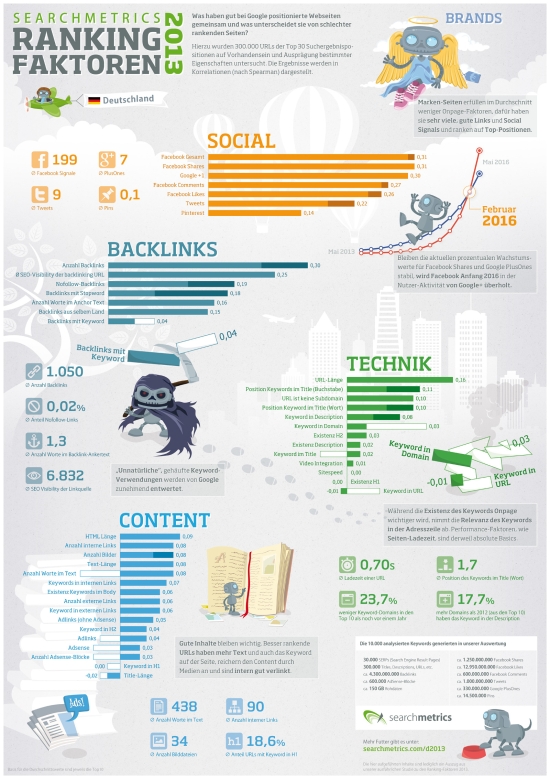 If you would like to print out the file or have it printable, you can download the graphic here in high resolution. Have fun with it!

I am aware that the study provides enough material for discussion and, as always, jumping to conclusions without reading the study will be made. That's how it is. Still, the question for you, what do you think of our findings? How do you like the infographic (many thanks to Jörg, our chief graphic designer)? As always, I look forward to feedback and a lively discussion!

Who is writing here? My name is Marcus Tober and I am the founder and Chief Innovation Officer of Searchmetrics GmbH. I love data, which is why my posts usually have more than enough of it. Don't let that bother you. I look forward to lively discussions in the comments.

43 thoughts on “The 2013 ranking factors for Google Germany”