Why are there teenagers in cliques?

She is your second family and almost more important to you than the right one.
Your clique.
And that is why your parents are particularly suspicious of it.
Because they know exactly that in certain cases their opinion no longer has a chance against that of the clique. For example, when it comes to things of love and taste. They suddenly notice that their children are somehow slipping away from them, breaking away from them, listening to others. Which of course also hurts a little. Hard competition, so to speak.
In addition, there are fears as to whether the respective clique is also the "right contact" for their child or whether they are exposed to dangerous influences and temptations among their friends. Few parents feel reassured and only have positive thoughts when it comes to their offspring clique.
With a little understanding and openness on both sides, the clique issue in your family shouldn't be an issue, right?

Psychologists have long since found out that the so-called "peer group" is most important for young people during puberty. Friends of the same age (the clique or "gang") often become a second family, in some cases even a kind of surrogate family, namely when one's own family is broken, broken or incomplete. The clique gives a feeling of "being in good hands", which is immensely important for young people at an age in which they are fighting against themselves and the rest of the world.

• A clique's sense of togetherness is strengthened above all by the fact that they all have the same problems with appearance, school, annoying parents, lovesickness, etc. and are therefore easier to understand each other. And be able to help each other.

• However, the concept of friendship is to be defined more broadly within a clique and not to be equated with the intimate friendship between two girls ("bosom friends") or boys ("thickest buddies"), which is characterized by boundless trust. So the clique learns a lot, but not everything. This privilege is reserved for the one intimate!

• The size of a clique can range from a modest three to four members, who are always stuck together, to over twenty and always depends on the type (see below) of the group. The average should be eight to ten people.

• The "lifespan" of such a circle of friends is also very different. It can only last a few months (dance course), a few years (school class) or even decades (athletes, organizations).

• Certain rituals are typical of cliques, of which the members themselves are often not even aware, but which are perceived by outsiders as characteristic of this group. That can include exuberant greetings, certain language habits, meeting places, gestures and the like. be.

How do you find each other?

According to the motto "like to join people at the same time". It's actually logical for people with the same hobbies or views to get together. Quite often, an originally dedicated interest group such as a sports team, an environmental group, musicians, etc. grows together to form a real circle of friends. Those who spend a lot of time together inevitably get closer.

Clothes and other appearances

Actually a pretty blatant and absolutely superficial motive to get together. As an excuse it must be added that over time such groups develop something similar to a "program" and also hold similar views beyond the common dress code. As long as this visual isolation from the outside is peaceful, nobody has anything against it. Unfortunately, there are always more or less violent clashes between rival groups. Examples: punkers, poppers, rockers, bodybuilders, Barbiemiezen, Chiemsee / Hilfiger / Nike or-what-I-know-disciples ...

Especially in big cities or in rural areas, young people get together for purely practical reasons so that they don't have to travel so far or because there is no other way. Those who are not motorized appreciate the clique "around the corner" or are satisfied with the offers in their own village. At least until you have your driver's license ...

The same worries, fears and longings make people open to fellow sufferers. Who can listen to and advise you better than your own gender when it comes to make-up problems, styling tricks and menstrual cramps? Or when it comes to hitting on girls, talking about football or mopeds, or exchanging condom and other love experiences?

Same-sex cliques exist especially at a young age and are inevitably mixed when the first couples find each other ...

A: One boss and many followers

One is the undisputed boss who sets the tone. The rest of the herd follow him blindly. By far the most common variant, as it is the easiest. Problem-free because the roles are clearly assigned and there are no power struggles and discussions. Works until someone picks up. And then quickly thrown out.

Two would-be lead wolves practice measuring their strengths and try to gather the largest possible fan base around them. An endless back and forth. That of course brings a lot of unrest to the group and can wear them out. Usually only a transition phase, either as a preliminary stage to variant A or the final stage before the final breakup of the clique.

Decisions are made democratically according to the motto: "The majority wins and the minority accepts the judgment". Every opinion is heard, every vote carries weight and counts equally in the vote. The best form of a clique, because the diversity of opinions means that you always hear other arguments and approaches in addition to your own. What enriches and protects against fanaticism. This variant is mainly used in very large groups and also older young people, as it requires a minimum of maturity and tolerance.

What is good about cliques 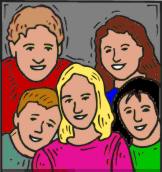 As already said, in their function as a second family, cliques give their members a feeling of protection and security, thus they satisfy important basic human needs. An achievement that is to be valued highly, especially today, in a society characterized by selfishness, coldness and indifference.

• Joint activities prevent loneliness or boredom. It doesn't always have to be the big action, just sitting together and chatting is enough.

• The clique also offers distraction from problems with parents and school. In this way you can forget your personal difficulties for a few hours. Away from anger and stress, instead relaxation and recovery. A good deal!

• Associate the same age with the same worries of everyday life. Because you can put yourself in the other person's shoes so well. Understand him and be understood. The language is the same, the expressions, of course, a connecting code. Likewise, the roller coaster driving feelings. A pimple on the nose is a problem for others too. Even if the parents will obviously never get it.

• Not to forget the mutual support. Often the feeling that one is being listened to and that one is being taken seriously helps over the first anger and grief. If there are consoling gestures such as being hugged or even active help (e.g. accompanying the doctor, teacher, parents), the valley of tears will certainly be passed very quickly.

• After all, the clique is a non-binding group from which it is easier to separate yourself if necessary or if you wish, than would be the case, for example, with your biological family, your partner or your best friend. Separations are less painful for everyone involved. Quite simply because the ties are less tight and less compulsory. If you leave, you may leave offended, but unlikely to be seriously injured or even broken hearts.

An intimate bond and deep friendship with like-minded people is something really great. As long as it doesn't interfere with your freedom of choice. If you are no longer allowed to dress, say, do or even think what you actually want inside yourself, something is fishy. Clique economy is good, but please not at the expense of my individual development.This also means that you are forced to smoke or drink alcohol, but rather that you accept if you do not want to participate in something that you do not like!

Unfortunately, a disease in many groups: everyone thinks they have to prove to the others how great he / she is. Big slogans are knocked out, great stories are bragged and impressive experiences are told, the truth of which should probably not be checked. Real friends don't need this courtship, which comes from the animal kingdom, do they?

Surrounded by nice, charming, talented and pretty girls suddenly you feel completely inconspicuous. The same goes for all super-cool, mega-sporty, muscle-bound women heroes. Don't be tempted to make stupid comparisons. The others always see you with different eyes than you do. And as I said, you really don't need to be intimidated by the bragging rights and alleged successes of the others. Just as little can be persuaded into unreasonable starvation diets or unwanted piercings or tattoos. Only YOU count! Think about it: do you want to be the most desirable girl in school that anyone can get when it means that she is conceited, bitchy or easy to get? Remember, every coin has two sides ...

Unity is strength. And often blind and unjust too. Blind to obvious truths (the new classmate is actually sympathetic and helpful, even if he speaks a strange dialect) and unfair in his behavior towards dissidents and outsiders (this prank is mean, everyone is cowardly ...). After all, the values, views, opinions and ideals of a group are not universally valid! How about the following principle: "Everyone should be happy according to their own style .."?

Tests of courage and other entrance tests

There are actually supposed to be stupid cliques who demand any "admission conditions" such as tests of courage, dress code, introductory party, inauguration ceremonies at the expense of the newcomer and similar nonsense. My tip: You should avoid such groups of idiots as much ...

For them it is to be feared that their "tests" will become increasingly harder. After the beer on ex, there is a little shoplifting, a first joint or other drugs. After all, you have only one life and one future that you shouldn't jeopardize yourself because of a temporary desire for dubious recognition.

Not bad, but embarrassing. Have you ever been upset about singing taverns, cackling bunch of girls, screaming sports fans or breakneck races by some macho? Then you'll know what I'm talking about and you'll think about it the next time you clearly move away from the norm in terms of volume and boisterous behavior ...

Problem areas within a group

The larger the clique, the greater the risk that several small groups will form within the large group. In the form of close friendships for two, that's not bad, but with three or more people there is a risk of splitting off. You don't need to feel guilty if this happens to your bunch. People always develop further and sometimes they also diverge.

Couples in love within a clique are beautiful. Everyone is happy with the lovebirds and treats them to happiness. If the lovers are enough of themselves and separate a little, that's fine too. But woe, love breaks and the couple split up. When the rest of the clique is drawn into the breakup and suddenly has to take sides That rarely goes well and usually creates a lot of trouble. Until finally one of the two pulls away injured. Which almost everyone regrets.

Couple with a partner from the outside

If the partner's personality matches the clique, zero problem. If the rose-colored glasses of those in love up to their ears cloud the view for the essentials, then there will be trouble. Because the newcomer disturbs the usual peace with his demeanor and his views. Often things ferment subliminally to the point of big bang. After which the couple disappears. And later the abandoned partner remorsefully returns to the old clique. Which magnanimously takes back the lost sheep.