What is a good metaphor for socialism 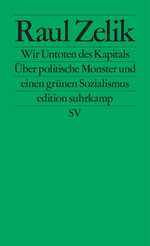 Only green socialism can help against capitalism, which turns us all into zombies. To achieve this, reform and revolution must interlock.

It may be the popular cultural figure of our time: the zombie. After an economic boom in the 1970s, since the early 2000s, countless films about the undead wandering around without a soul or mind have been shown in cinemas again. For the social scientist and writer Raul Zelik, the zombie is more than a figure; he sees the zombie as a metaphor for a life in capitalism - a social and economic system that is in contradiction to the life that is being shown right now during Corona. “The pandemic is a crossroads - either we decide now for a project of life or for one of accelerated social destruction.” (P. 15) This is what the preface to Zelik's book “We Undead of Capital” says.

We are the zombies

On closer inspection, “we” look at ourselves when we watch films and series about the mostly subjectless zombies in the cinema or on the laptop. The zombie metaphor is correct, the undead is already part of our lives: Signs are lifeless city centers, the feeling of being nothing more than an appendage to a machine in wage labor, an everyday life in which the form of goods does not stop at friendships and Love relationships.

“The late modern era is a peculiar epoch: On the one hand, the self-determination discourses are the mantra of our society, and the central ideology of individualism does not tolerate any objections. On the other hand, more and more processes in our life follow a logic over which we seem to have no influence, indeed which contradict our interests diametrically. "(P. 23)

In his book, Zelik contrasts this development with a concept that may also seem like a zombie to many: that of socialism. Zelik envisions a socialism that distinguishes itself from that of the 20th century. Here the Soviet Union, the Chinese Cultural Revolution and the socialist Yugoslavia serve as negative examples - sometimes portrayed somewhat stereotypically - from whose mistakes a new socialism must learn. For example, there was a lack of a built-in transformation mechanism “with which crises could have been dealt with” (p. 158). Zelik advocates a socialism that not only starts with the assumption of political and economic power, but also puts the social at the center.

The dream of paradise

Zelik is not only about changing ownership, but also about the issues that have shaped young people around the world in recent years: feminism, anti-racism and, in particular, ecological aspects. He advocates an eco-socialist project that goes beyond mere growth criticism, because it also raises the question “to what extent natural relationships, consumption models and ways of life are intertwined with class and rule relationships” (p. 199).

In his book, Zelik moves safely on the terrain of left-wing theory and strategy debates, which he uses extensively. He succeeds particularly in the central inner-left discussion of the past 150 years: all over the world, left parties and organizations have repeatedly split because the members have not been able to choose between reform on the one hand and revolution on the other. Zelik, who is also a member of the Left Party's executive committee, clearly rejects this polarized opposition.

"The messianic idea (as found in Walter Benjamin) that a revolution could break open the 'continuum of history' and, so to speak, start anew, has proven to be wrong because society is the old 'the day after'." ( P. 152)

It's an important thought: the dream of paradise is problematic. Quite apart from the here at least implicit idea that all contradictions are abolished in paradisiacal socialism, paradise appears as the counterpart of the here and now, as unattainable. Instead - and this is how Zelik can be understood here - it must be about combining the existing with the desired, asking oneself which concrete steps have to be taken. With regard to reformism, however, Zelik has no illusions; he considers the social democratic reform policy of the 20th century to have failed, since there is hardly anything left of it.

Zelik advocates understanding reform and revolution as mutually effective. Democratic and social advances in the past have mainly occurred when there was an interplay between the two, for example at the end of the 19th century in Germany when the social security system was introduced.

"The motor of the Bismarckian reform process was the rebellion of the working classes, and in the end it was not the institutional power of social democracy that was decisive, but the movement's potential to create ungovernable conditions. Not a progressive government, but the organization of the lower classes and the fear of them laid the foundation for the German welfare state. "(P. 119)

Zelik proposes a whole series of reforms that start in the here and now, but that go beyond the existing social and economic system. The focus is on the idea of ​​a Green New Deal, for which the left wing of the Democratic Party in the USA is promoting.

The text fluctuates between social science analysis, columnist essay and political program writing. These jumps in form are covered by the clear and descriptive language of the book, including illustrations from the film world and literary history. Here Zelik benefits from the fact that he has published a number of novels in addition to various non-fiction books.

Martin Büsser wrote about the zombie film "28 Days Later" in 2003 concrete, with its sparse view of the post-industrial rubble in which the zombies lived, the film plays with the idea "what could remain when there is nothing left of capitalism". To recognize that the zombie apocalypse can still be averted, "We Undead of Capital" invites you to do this - and provides a very good basis for discussion as to which steps are necessary.

The contents of this website or document are licensed under the Creative Commons Attribution-Non-Commercial-No Processing 3.0 Germany License. Permissions beyond this license can be obtained from our contact page.

Unless otherwise stated, all images are excluded from this licensing! This applies particularly to the illustrations of the books and the edition images.