We are nearing the end of our article and with it the final assessment of the FX-8150, which has to stand as a flagship representative of a whole range of FX processors. And what we've seen is certainly not a bad accomplishment. But the high expectations and desires of many enthusiasts, who have long been looking forward to the "Bulldozer", will not do justice to the same degree of certainty.

What definitely represents progress for AMD and opens up new perspectives for the company with a fresh architecture in terms of the accumulated performance, the new instruction sets and the energy efficiency, is only enough for second place among the affordable desktop CPUs for private users (the Core i7 Extreme We leave CPUs out at this point due to their hefty pricing). Nevertheless, Intel is in the starting blocks with new models, how long AMD can hold at least second place with the FX-8150 depends entirely on the blue chip giant and not really on AMD itself.

Which brings us to the price. AMD is again forced to settle the prices of the FX processors in relatively low regions, which at least pleases prospective buyers - AMD itself, however, probably not. 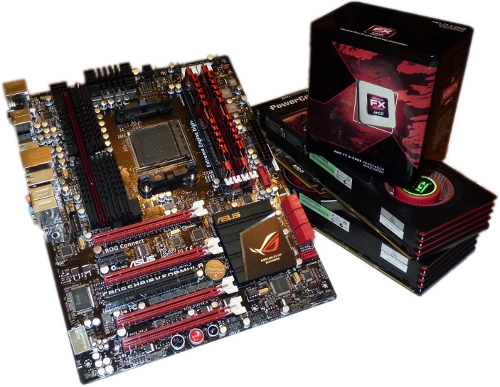 So what is it? Our tests clearly show that AMD is strong when it comes to productivity when applications run efficiently across many cores. Nevertheless, the old Phenom II 1100T is often within striking distance, the FX-8150 cannot really stand out, even though it has two more cores. The FX-8150 then has to make up for these lower Instructions per Cycle (IPC) per core with its powerful turbo in games that rarely benefit from eight cores. Here, too, that's just enough for the FX-8150 to sit in front of the "old" six-core Phenom II.

The FX-8150 benefits from the fact that, especially when it comes to games, there is virtually no difference between all the CPUs tested, and that includes the models from Intel. There are clear differences in the frame numbers of individual benchmarks - sometimes Intel is ahead, sometimes AMD - but that doesn't change the playability. We tested with an AMD Radeon HD 6970 CrossFire network and even Eyefinity how the CPUs position themselves in terms of performance and we can therefore say with certainty: The differences do not change anything in terms of playability (or non-playability) in the end. Even with such configurations, the limit is set by the graphics solution and not the CPUs in this price range.

The FX processors are therefore of interest to users who have been flirting with a platform upgrade for a long time anyway. However, if you own a Phenom II X6 1090T or 1100T, you hardly have any reason to switch to the FX-8150 for performance reasons, even if the FX-8150 is the more energy-efficient CPU overall - the savings on the electricity bill will hardly be able to outweigh the costs of the new acquisition .

However, this assessment is subject to the will to overclock. We drove the FX-8150 effortlessly to 4.7 GHz thanks to its free multipliers, measured the performance at 4.6 GHz and the result is a whopping increase in performance. Our caution when it comes to heat generation has slowed us down, but since AMD is already planning to offer bundles of FX-8150 CPU and all-in-one water cooling in some markets, there can be a lot more in overclocking.

However, AMD itself is also aware that the performance difference offered by the FX-8150 is rather small compared to older models. AMD shares responsibility for this with Windows 7, whose thread scheduler cannot handle the architecture of the AMD FX processors efficiently. Everything should get better with Windows 8, but we briefly tested the FX-8150 with Microsoft's Developer Preview - and didn't write anything about it in the article because there was nothing to write about. Yes, with the Windows 8 Preview, minimal increases in performance can be seen (6.01 points in Cinebench R11.5), but this is by no means the big solution.

And what's next? AMD refers to the "Piledriver" cores or modules that will find their way into the Trinity APUs in 2012 and will replace the "Bulldozer" in the CPU segment. AMD is aiming for a performance-per-watt increase of 10%. For some owners of a Hexa-Core Phenom II, this should certainly raise the question of whether it might not be better to wait a little again. For all other performance-hungry users, however, the upgrade to the FX-8150 can definitely make sense.