How long can a genome be

20 years of decoding the human genome

The genome decoding was a sensation, although the announcement by Craig Venter on April 6, 2000 was a little premature. Because it actually took a whole year until the Human Genome Project (HGP), which was competing with it, published its scientifically appraised results on February 15, 2001 in the journals Science and Nature.

The decoding of the genome was a race for scientific fame - between the US government-sponsored and somewhat slower HGP and Venter with his private company Celera Genomics. Compared to Celera Genomics, the state researchers lagged a little behind in terms of success. By April 2000 they had only been able to decipher 54 percent of the human genome.

The genome is made up of the DNA building blocks. It contains all of life's inheritable information. 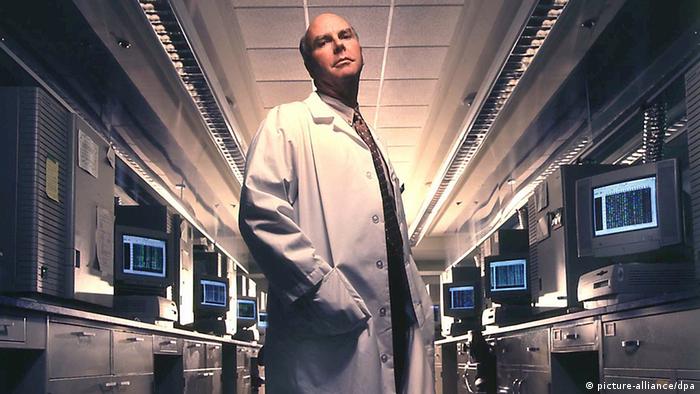 Craig Venter in 1998 at his company Celera Genomic. Venter invented gene sequencing with the "shotgun".

With the shotgun on the genome

Venter uses a different sequencing method than the researchers at the HGP, namely the so-called shotgun method he developed. In this case, the individual DNA fragments are generated randomly. You can imagine it like shooting the long chain with a shotgun and then looking at and reading out the fragments one by one.

However, Venter also used data from the HGP to achieve his goal. And that was ambitious: The human genome consists of 3.2 billion base pairs, the letters of life, so to speak. Finding them all was a mammoth task for him and the competing researchers. The genome chain is actually quite simple.

It consists of a series of just four different building blocks, the DNA bases cytosine (C), guanine (G), adenine (A) and thymine (T). Only their sequence of bases determines our eye or hair color or whether any hereditary diseases are dormant in us.

Lots of doors that lead nowhere

Only a few sections of the entire genome are the genes that contain important instructions for building blocks of life such as proteins. "As far as we know today, a large part of the DNA is an evolutionary remnant and has no task. It is therefore clear that the door to the Code of Life has been unlocked, but there are countless new doors hidden behind it," writes the chemist Friederike Fehr from Max -Planck Institute for Dynamics and Self-Organization in Göttingen.

Many genes that were discovered in the genome sequence were previously unknown. "So the effects or tasks associated with them also have to be researched. The sequence of letters alone is of only limited help."

More on this: CRISPR / Cas9: Will the gene scissors get even better?

Only when the sequencing was completed could the full decoding of the human genome unfold its effect. Although Venter published his very personal genome in the journal Plos Biology in 2007, that was also more of a symbolic meaning. The sequencing of genes in itself was only a first step towards a fundamental change in our medicine.

The scientists first had to research and assign the respective functions of the individual genetic components, i.e. which component is responsible for what. They did this with the help of mice. Their genome is largely the same as that of humans and was thus a basis for recording the functions of human genes as well.

Experts believe it could take dozens, if not hundreds, of years to truly understand the human genome.

What do we get out of it?

The genetic makeup of two people is different from one another. The genetic predisposition to certain diseases is based on these differences.

More and more often, genetic tests are being offered that experts can use to find out some of these predispositions and thus determine whether a person is at increased risk for a disease or not. A saliva sample is sufficient for this.

The most important thing in all of these tests is to interpret the results correctly, for example the disposition for Alzheimer's or diabetes.

With the help of genome research, it is now possible to identify various gene functions. This in turn helps doctors treat certain diseases. These include children with an immunodeficiency that is hereditary. Doctors can even implant new genes into them to treat the disease.

Breast and ovarian cancer can be seen in the changes in two genes (BRCA1 and BRCA2). A genetic risk for a tumor disease has so far only been identified in a few cases by means of a genetic make-up analysis.

Its a lot to do

The human genome consists of around 25,500 genes. The researchers around the world were astonished by this result; a water flea even has - believe it or not - 30,907 genes.

How complex a living being is does not just depend on the number of genes. US President Bill Clinton said on April 6, 2000: "Now we are learning the language with which God created life." Today we know that we still have to look up a lot of vocabulary to do this.

This article has been edited and corrected since it was first published on April 5, 2020.

More on this: Ernst Jung Prize for microbiologist Emmanuelle Charpentier