Do you use Whatsapp

Messaging services: what we really use WhatsApp and Co. for

More and more people are using social networks and short message services for communication. However, this is not limited to the conventional chat function. In a study, Bitkom determined what we use messaging services such as WhatsApp for.

Regardless of whether we organize our private life or use them to interact with companies and brands: Messaging services have become an integral part of our everyday lives.

Bitkom Research GmbH and Bitkom e.V. carried out a study to determine what we use short message services such as WhatsApp for. There are mainly differences in usage behavior between the different age groups.

These extreme differences can be explained, among other things, by the survey methodology: 1,212 Internet users aged 14 and over were surveyed for the study - a broad spectrum of age groups. 89 percent of those surveyed use messaging services.

Telephoning with WhatsApp and Co.

Short message services have long since overtaken the Short Message Service (SMS) as a means of transmitting text messages. But classic telephony is also facing competition from the intelligence services. At least that is what the current study by Bitkom has shown. 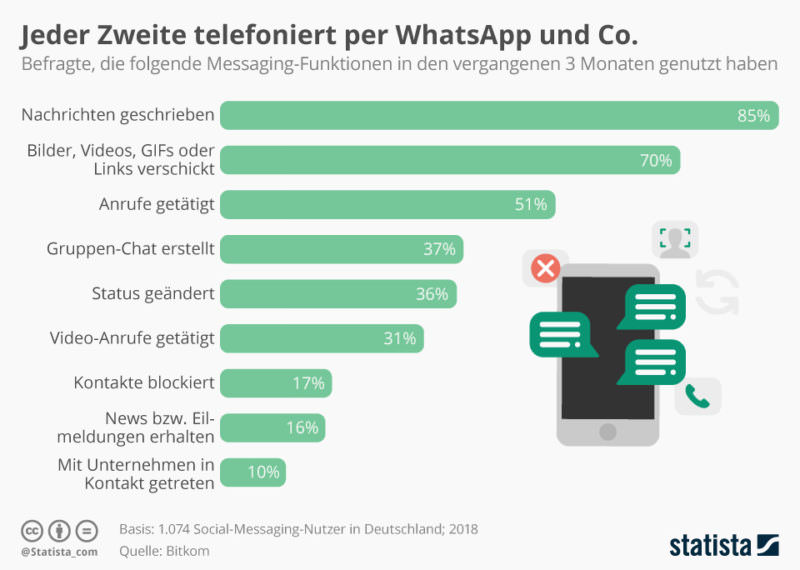 Bitkom determined what we use messaging services such as WhatsApp for.
(Photo: Statista / Bitkom)

In addition to composing messages, the phone function of the apps is particularly popular with messenger users. More than every second user uses the call function of the applications on his smartphone. One of the reasons for this is that phone calls via messenger are more convenient and can be made across national borders at no extra cost.

The majority of 14 to 29 year olds prefer to use messenger services for phone calls or video calls. In the under 20 year olds it is even 78 percent. Older users, on the other hand, tap the telephone receiver symbol on WhatsApp and Co. less often.

This is how we prefer to use messaging services

But there is one function that is even more popular: We most often use the messenger to send chat messages, which 70 percent of the participants surveyed not only consist of text, but also pictures, videos, GIFs or links.

Around 55 percent of survey participants also like to send voice messages with WhatsApp and Co. Functions that are less used are, for example, group chat (37 percent) or news services from media companies (16 percent). Because only a small part reads messages via Messenger.

It is also interesting that only a few users come into contact with a company via Messenger. Only ten percent have already used a messaging app to contact a customer service.

WhatsApp and Co: It is impossible to imagine everyday communication without it

Messaging services have not yet made a breakthrough in communication with companies and brands. And even if the proportion is still small today, WhatsApp, Facebook Messenger and Co. already play an important role in corporate communication.

WhatsApp and Facebook Messenger have been used the most for communication in the past three months. Here, too, it will be exciting to see whether alternative messaging services such as Telegram or Threema can continue to assert themselves on the market.

Register now for our weekly BT compact newsletter. As a thank you we give you ours LinkedIn guide.

You will have a tough time as WhatsApp opens up to more and more companies, brands and marketing experts. Most recently, the Facebook subsidiary has also offered larger companies a service that allows even major brands to contact customers via the existing application.

Do you use WhatsApp and Co in your everyday life? Which features do you prefer to use when communicating with friends and family?