Hippos make up a family of mammals. Besides the elephants, they are the heaviest animals that live in the country. They are also called hippos or hippopotamus. They live in Africa, mostly south of the Sahara desert, but also along the entire Nile to the point where it flows into the Mediterranean.

How do hippos live?

The hippo's muzzle is so wide because the large canine teeth have to fit into it. Even if the hippopotamus looks dangerous, it only eats plants.

A baby hippo with its mother in a zoo.

Hippos usually lie in the water during the day or spend their time near the water. They like to dive, and often only eyes, nostrils and ears protrude from the water. Although they are well adapted to life in the water, they cannot swim. You run along the bottom of the water or float. You can stand it underwater for up to three minutes without having to take a breath.

Hippos are herbivores. At night they go ashore to eat. They need up to six hours for this and for foraging. They pluck the grass with their lips. Hippos have very large canines, but they only use them when fighting. When they feel threatened, hippos are particularly dangerous animals.

Hippos mate in the water. The mother usually only carries one young animal in her stomach for about eight months. That is a little shorter than with humans. The birth takes place in the water. A young animal then weighs between 25 and 55 kilograms. It can run in the water immediately. It also drinks its mother's milk in the water. It can already follow its mother to a meadow on the first night.

The young animal needs the mother's milk for about half a year. From then on it only eats plants. A hippopotamus only becomes sexually mature when it is around ten years old. It can then reproduce itself. Hippos live to be 30 to 40 years old in the wild.

Are the hippos critically endangered? 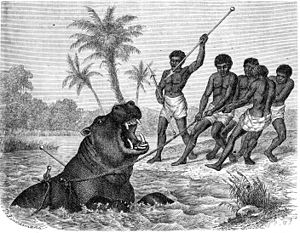 River pries have been hunted by humans at all times. They wanted his meat to eat, his hide for leather, or his teeth for ivory.

Adult hippos have almost no enemies. Only young animals are sometimes eaten, by crocodiles, lions or leopards. The females defend them together.

Humans have always hunted hippos. They ate their meat and turned their skin into leather. The teeth are made of ivory like elephants and are therefore popular with humans.

However, many people also regard the hippos as pests because they trample on their fields and plantations. What is worse, however, is that the hippos are finding fewer and fewer places to live. They are therefore extinct in certain areas. The rest are at risk.

There are also other search results for "Hippos" from Blind Cow and Ask Finn.