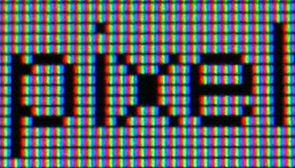 (2000) A pixel in a raster graphic is called a “picture element” or “picture cell”; briefly mumbled it results in "pixels".
Colored pixels from monitors are usually composed of three sub-pixels in the additive basic colors red, green and blue (see photo). 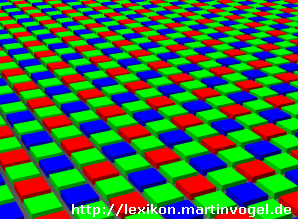 In the case of image recorders in digital cameras, instead of the actual number of pixels, the subpixel number is often given, which in these devices is usually four times the number of pixels actually generated, because these are recorded with four light-sensitive cells each with color filters in front of them. These so-called Bayer filters contain two fields each for green, one for red and one for blue light. So that the trick is not noticeable, 75% of the pixels are occasionally simply interpolated. See DPI.
Since the number of megapixels in a camera is unreasonably a popular selling point, the vendors of the Foveon sensor, where each pixel actually corresponds to a full-color image point, have a marketing problem. They therefore often advertise with a pixel number that is three times higher than in reality. Even good digital video cameras with three individual sensor chips for the three basic colors red, green and blue are usually advertised with the sum of the pixels of all sensors. So it also happens that normal PAL video cameras for the 720 × 576 pixels of the generated video (0.4 megapixels, in words: zero point four) are advertised in the prospectus with apparently completely unrealistic 1.2 megapixels and more.
(2014) With the advent of ever higher resolution screens, such as Apple's Retina display or today's smartphones, a problem arose for the designers of websites, as they have worked with fixed monitor resolutions of 72 or 96 pixels per inch for years. Content that was designed for old monitors is unreadable on high-resolution screens. As a compromise, a solution was established that provides for a conversion to imaginary pixels (CSS pixels or px) with an edge length of 1/96 inch if a corresponding display area has been registered in the page source text. This can be done, for example, by including the following line in the head section of an HTML file: Guidelines for webmasters