How to say lit in Portuguese 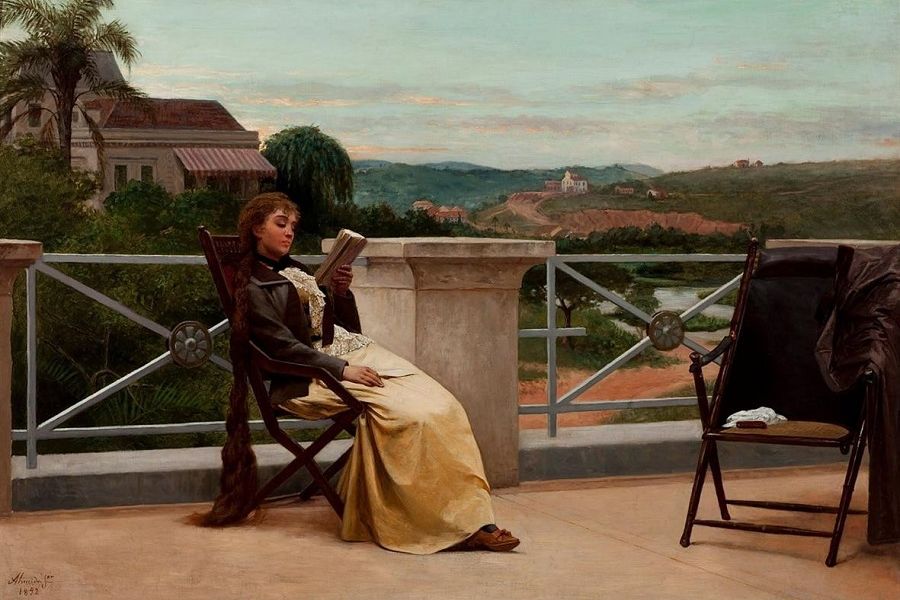 There are around 7,000 languages ​​in the world, but only a tiny fraction of them are translated into German. We interview people who translate masterpieces from underrepresented and unusual languages ​​and thus give us access to little-explored worlds. You can find all the articles in the rubric here.

How did you learn Portuguese?

My parents studied geology and my father always worked in iron ore mines. After living in Liberia for three years, we moved to Brazil when I was four. So I learned Portuguese quite normally on the street. We spoke German at home, and I learned to read and write in both languages. At home in German, at school in Portuguese. A few years ago I noticed that I was still clearly speaking in the tone of the Minas Gerais region in Brazil, even though I had tried for years to adopt the Portuguese variant, which sounds very nice to me. When I started studying in Frankfurt, I immediately found work in a Portuguese bookstore, and that quickly brought me into contact with the many other variants of Portuguese. Portuguese is spoken in Europe, Asia, Africa, and Latin America. Of course, interesting differences have developed, not just in tone.

As already mentioned, Portuguese is written and read in very different countries: Angola, Brazil, Cape Verde, Guinea-Bissau, Mozambique, Portugal, East Timor, São Tomé and Príncipe. My impression is that Portugal and Brazil in particular have lived side by side in literary terms for a long time. The literature of the Portuguese-speaking countries in Africa, on the other hand, is strongly oriented towards Portugal, not least because the big publishers and, for economic reasons, also the majority of the readers are based there, and the authors mostly studied in Portugal either during colonial times or later. Conversely, this does not mean that there are e.g. B. Angola or Mozambique would not also have strong local literary scenes and circles. Writers played a major role in the struggle for independence. Curiously, perhaps the most important voice of Angola's literary independence, Luandino Vieira, was born in Portugal and lives there again today.

The younger generations exchange ideas via the Internet, but I have the impression that festivals and cultural institutes have played a major role in creating a real kind of networking. In Brazil, there was a real boom in literary festivals based on the now legendary literature festival in Paraty and, thanks to the progressive governments before the coup in 2016. More and more writers from Africa and Portugal were invited there. And vice versa. In Portugal, the “Iberian” literary meeting has been taking place since 2000 Correntes d'Escritas with an explicitly international claim. In Mozambique, I myself was a guest there with the Brazilian writer Luiz Ruffato Resilience-Festivals. So “you” somehow know each other and relate to each other.

On the other hand, I have z. For example, scenes in Mozambique made it very clear how deceptive this picture is. In the provincial capital of Xai-Xai, only 200 kilometers from Maputo, Luiz Ruffato was the first foreign writer to ever perform there, and young people interested in literature (some with their own publications) had taken entire day trips to find out about him as well to hear the Mozambican novelist and narrator Lucílio Manajate. In Lisbon, on the other hand, I regularly manage to meet four to five renowned authors on the street in a single day. So it's pretty imbalanced overall.

What do you have to read?

I'm not sure if something should be read “absolutely”. It depends more on what you want to read. Portuguese is written in extremely different realities, so a lot of interesting things come together. German-speaking readers have to be content with the little that has been translated anyway. Per year that's maybe a dozen titles from all eight Portuguese-speaking countries. This year there are around 50, because Portugal has invested a lot of money in translation funding because of the planned guest country appearance in Leipzig - incidentally also for literature from Africa.

In 2013, when Brazil was the host country in Frankfurt, there was also a brief boom like this. At that time, a number of highly interesting authors who had long been overlooked were translated: Carola Saavedra, João Paulo Cuenca, Michel Laub. But apart from Luiz Ruffato with seven books since 2012 and the well-known Patrícia Melo, who, by the way, is just being celebrated again in all feature sections, hardly anyone has been able to establish themselves permanently in the German-speaking market. It is gratifying that at least Clarice Lispector, who was rediscovered at the time, has now apparently also made it into the canon. A second volume of her collected stories has just been published in a translation by Luis Ruby.

From this year's new publications, I would definitely like to recommend Dulce Maria Cardoso from Portugal, whose fan I've been for almost two decades and who is now with her novel for the first time The return (Translated by Steven Uhly) can be read in German. The novel thematizes Portugal's colonial drama in a very contemporary, haunting and personal way - as, by the way, Isabela Figueiredo last year Red dust (Translated by Markus Sahr), from this year The fat (translated by Marianne Gareis) on a completely different, no less painful topic. Then I finally got the opportunity to do that Senhores translated by Gonçalo Tavares, a series of very funny literary paraphrases. Everyone who read this is thrilled.

Poetry is also increasingly coming to us this year. Ana Luísa Amaral z. B. I was allowed to translate together with Piero Salabé. Ana Paula Tavares from Angola and Conceição Lima from São Tomé, both of whom I adore, will appear in the translation by Juana and Tobias Burkhardt. Then it is clear that you should know Mia Couto from Africa. Be The sleepwalking land (translated by Karin von Schweder-Schreiner) is on various lists of the most important African books. Currently coming Ash and sand (also translated by Karin von Schweder-Schreiner), the final chord of a trilogy about life and survival in war against the background of the conflicts in Africa at the end of the 19th century. The list of new publications translated from Portuguese is encouragingly long this year. I can recommend almost everything from it. From the already repeatedly mentioned Luiz Ruffato is straight Sundays without God, the fifth volume of the novel cycle Temporary hell came out, a work that one should like to see as a whole.

What is not translated yet?

This list is also long. At the moment it pains me that I have not been able to accommodate the best novel of 2019 for me somewhere: O Processo Violeta by Inês Pedrosa. A decidedly feminist novel about the scandal of the affair between a teacher and a student in the 1980s. Everything is dealt with here: bigotry and libertinage, morality, racism and the long shadow of fascism in Portugal at the time only a decade ago. Translating it someday would make me happy. It is also one of those books that “one” should have read (even outside of Portugal).

What are the main difficulties translating from Portuguese? How do you deal with that?

I think the greatest difficulty is finding a publisher. I find it difficult to talk about difficulties in translating because I am quite forgetful about it. You have to deal with the difficulties, deal with them literarily, and when that is successful, the difficulty is fortunately overcome. Perhaps, as in many languages, one problem is the large number of variants and language levels, most of which have no direct equivalent in German. For example, what does it mean to a person in Portugal when a literary figure uses a term borrowed from the Kimbundu? How much can I exoticise or normalize? African authors in particular play with these language variants, some of which stand for colonial or post-colonial circumstances.

Currently, I am increasingly concerned with dealing with discriminatory terms, recognizing, classifying and appropriately translating racist, misogynist or classical language. The nonchalance that is dealt with in all Portuguese-speaking countries with their different colonial pasts with terms that are impossible for our current state of discussion, for example skin colors, drives me. None of this can be translated “just like that”, you have to find appropriate terms without again assuming racism to the author himself. Often there are words that sound similar to German (let's just think of the unfortunate N word), but are not. I have not yet been able to overcome this difficulty, which arises often, but always incidentally, conclusively or satisfactorily. I would also like to work systematically on the problem instead of stumbling over it again and again with every book.

What can Portuguese do that German can't?

Portuguese can do everything. German too. You can deal with both more or less well. This is individual and not specific to a particular language. For me it is the case that Portuguese keeps more open - which is not always the funniest kind of person who has to translate this into a language that is considered “regulated”. But German also has its vague moments.

What is special about Portuguese is that it is a European, African and Latin American (in parts even Asian) language at the same time. This results in an incredibly rich vocabulary and an abundance of idioms that are of course different everywhere, not to mention the many influences from neighboring languages, from Arabic to various Bantu or Guarani languages. Due to its spread, Portuguese has a geographical spread that German never had. And everywhere there are regional peculiarities and also adoptions from one variant to another: Terms from Angolan Portuguese suddenly appear in the slang of Lisbon, Yoruba words get to Angola via Brazilian. The back and forth between the different variants of Portuguese is something different than, for example, in Germany the shy adoption of individual words from the languages ​​of immigrant groups. That might make the language a little more playful and enjoyable - to the burden and pleasure of the translator.

We are looking for translators for the “Big Little Language” section who would like to present their “small” language with our questionnaire. If you feel addressed, please get in touch at [email protected]
Michael Kegler, born in Gießen in 1967, has been translating literature from Portuguese since the late 1990s. For his translation of the novel There were a lot of horses From Luiz Ruffato, he received the Straelen Translator Award of the Kunststiftung NRW in 2014 and, together with Ruffato, the International Hermann Hesse Award in 2016.Since his time as a bookseller in Frankfurt am Main, he has been committed to the dissemination of Portuguese-language literature and is a member of the board of the Society for the Promotion of Literature from Africa, Asia and Latin America (Litprom). (Photo: Ramin Mohabat)
Posted in Big Small Language and tagged with Dulce Maria Cardoso, LBM21, Luiz Ruffato, Portuguese.
<?