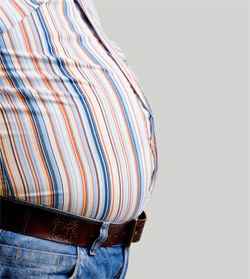 According to estimates by the World Health Organization, more than 500 million people worldwide are obese - almost a quarter of adults in Germany. A weighty reason to research the causes of pathological obesity. It has been known for 20 years that there is a hormone in the human body that works like a gasoline meter: If there is a lot of gasoline in the tank, the gasoline meter shows that the gasoline level is high. This is also the case with the hormone leptin. It is made by adipose tissue and shows the body fat content. If body fat increases, proportionally more leptin is produced, released into the blood and transported to the brain. Once there, it tells the brain the amount of fat in the body. If there is a lot of leptin in the blood, the brain makes the body feel full. Food intake is inhibited and metabolism increased.

However, this seemingly simple control system does not work for obese people. Because if the body fat content is abnormal, the brain's perception of the leptin level is disturbed. Leptin resistance develops. The brain no longer reacts to the increased amount of leptin. "But even 20 years after the hormone was discovered, the cause of this leptin resistance has not yet been adequately clarified," says Dr. Alexander Tups from the University of Marburg. With the support of the Federal Ministry of Education and Research (BMBF), he heads the junior research group “Central Nervous System and Nutrition” and has now tracked down the phenomenon of leptin resistance. 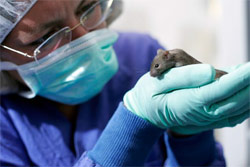 Now it is clear: It is not - as long suspected - the high leptin level itself leads to the resistance of the brain to the hormone. Rather, this phenomenon is triggered by a very high-fat diet. To find out, Tups and his team used a trick: “Normally, the leptin level is always linked to the fat content of the body. That is why we carried out our study with mice that naturally carry a mutation and do not produce leptin, ”explains Tups. As a consequence, these mice are extremely obese. In the study, the obese mice were given high doses of leptin for ten days. The animals then lost weight dramatically. In order to understand what influence diet has on leptin resistance in the brain, the mice were divided into two groups. Half of the animals received normal food, the second half very high-fat food.

The result surprised the young researchers: They discovered that the mice that ate normal food stayed slim. The animals did not develop leptin resistance in the brain. Mice fed a diet rich in saturated fat did not stay lean. With them, the weight-reducing effect of leptin was canceled out by the high-fat food. Your brain developed a resistance to leptin. "This clearly shows that it is not the high leptin level, but the high-fat diet that is the cause of the leptin resistance in the brain," summarizes Tups.

Together with his team, the young scientist is currently testing whether the lost leptin sensitivity in obesity can be restored. For example, with the help of plant polyphenols or pharmacological substances that have a leptin-sensitizing effect. Findings from this research could go far beyond the treatment of pathological obesity. Because leptin resistance in the brain does not only have an impact on body weight. "We now know that leptin resistance via neuronal mechanisms also contributes to the development of type 2 diabetes mellitus, a classic secondary disease of obesity," says Tups. "Our findings could therefore also be useful for the treatment of this disease."