How would you describe the water cycle

Information sheet on the water cycle 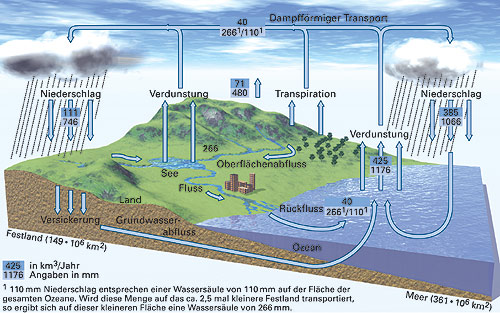 Water is a vital substance that enables humans, animals and plants to exist on this earth. The water reserves seem to be unlimited, as around 70% of the earth's surface is covered with it (equivalent to around 1.4 billion cubic kilometers). However, this statement is only partially correct, as the proportion of fresh water that can be used by humans is less than 3%. Of this, almost 78% are bound in ice or snow. As a result, only a small part is available as drinking water.
The above-mentioned usable amount of fresh water would be exhausted in the foreseeable future if it were not constantly renewed by the earth's water cycle. Part of the water is therefore in an endless cycle between the atmosphere, land and sea, in which the main components, consisting of evaporation, atmospheric water vapor transport, precipitation and runoff, play a decisive role.
The earth's water cycle thus represents an enormous transport system, with the sun acting as a drive or motor and the atmosphere as a heat engine. This cycle can be seen as a giant air conditioning and gigantic distillation plant (fresh water is constantly being produced from the salt water of the oceans).

Water factors and occurrences on earth

The process of the water cycle

Water is present in the atmosphere in gaseous form (i.e. water vapor). This proportion is increased by the evaporation process. Water rises in a gaseous state from the earth's surface (e.g. from lakes, dams or land surfaces) and water droplets or ice crystals form, which are held in the atmosphere in the form of clouds or fog or transported over long distances by the wind can be. After reaching a certain drop or crystal size, the water from the atmosphere returns to the earth's surface in the form of solid or liquid precipitation (e.g. snow, hail, rain). There a part can be held back by the vegetation cover (interception) or stored in the form of snow and ice, evaporate again, seep away (infiltration) or, for example, get into the next river and again after a certain time delay into the sea (surface resp. Intermediate drain).
The process of infiltration first replenishes the soil water reserves. Plants need z. B. this soil water. They absorb the water with the roots (root absorption) and it is transported through the plant system to the leaf surfaces, where it can then evaporate again (transpiration).
If the water penetrates further into the soil, it gets into the groundwater to form new groundwater and retreats back to the surface (groundwater runoff).
If the surface, intermediate and groundwater runoff reaches a receiving water (stream, river), then it follows the greatest gradient to the sea or to a lake and is thus available again for the circulatory system.
Most of the water turnover, however, takes place at sea. A large part of the evaporated water returns to the sea as precipitation and only a relatively small proportion is in exchange with the sea and the land.
In the water balance, the interaction of its most essential elements in a spatially defined area or in a section of the lithosphere is considered for a certain time interval. This results in the so-called water balance equation. If measured values ​​are available for a period greater than or equal to 50 years, the following equation results:

If values ​​are only available for shorter periods of time, then storage changes within the system as well as various discharge components must be taken into account. The equation for this is then:

The water cycle is influenced by many different factors. These include, above all, natural influencing factors (such as the design of the terrain, inclination, exposure, temperature, wind, plant density, soil moisture, organisms, etc.), but also anthropogenic factors caused by humans. The list of anthropogenic interventions in the natural cycle and the resulting consequences is long, so only a few examples can be given at this point:

Back to the terrace
<?