What we can learn from the "unbelieving Thomas"

It is one of my “favorite passages” in the Bible, this story of Thomas' encounter with the risen Jesus. I notice that this Apostle Thomas is very close to me with his skepticism and his doubts. It is precisely for this reason that it is such a shame that he has been and is repeatedly referred to as the "unbelieving" Thomas.

So close to the reality of being human

The fact that this story of Thomas' doubts can be found in the Easter reports is, for me, once again proof that the Bible is really very close to reality, very close to the common and commonplace of our human life. Isn't it really the case that we all know them very well, the doubts and uncertainties in life and especially in faith?

So behind Thomas's doubt there is not primarily a human weakness, but rather his doubt points to a deeper meaning. Because it is very important that it is really the same Jesus that he went with, for whom he left everything behind. It is reported that he was not there when Jesus first appeared to his disciples. When the others tell him about it, he doesn't believe it. He wants to see the marks and put his hand on Jesus' side, only then does he believe.

Each and every one of us has had the experience several times in life that one meets another person who reports of an experience that was immensely impressive or touching for him, that set something in motion again where there has been a standstill, which may even have decisively changed his life. And how do you feel as a listener?

One is amazed at the other person, with what force he appears, with what enthusiasm or emotion he reports on the event. But: you can't really understand or understand or empathize with the whole thing.

A certain amount of skepticism or doubt creeps in quickly. And it is precisely at this point that the inner attitude of the listener is crucial. 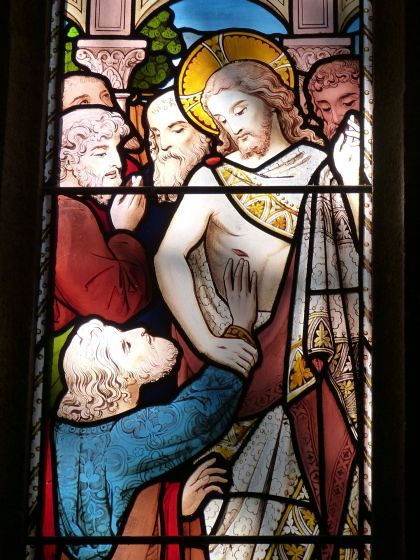 The healthy and the destructive doubt

There is a healthy doubt, but there is also a destructive doubt. A healthy doubt wants to understand - with head, heart and stomach. It leads in depth and it leads to positive discussion, contact and encounter. A destructive doubt could be expressed as follows: it exaggerates enormously, or: it has lost itself a little in an exuberance of feelings, or: it will come back down to earth. A destructive doubt is negative, it does not believe in others, limits itself to one's own horizon, does not have confidence, does not expect anything, closes itself off. It leads to loneliness and isolation.

And there is another aspect that could play a role if you listen carefully to yourself: Am I perhaps not granting the other the new life or the new perspective because I actually cannot really believe in it myself and quarrel with my inadequacy? Or can I be happy and say: "Nice for you and I am happy with you that you experienced it that way!"?

Thomas's doubts were certainly not of a negative kind, he didn't want to talk the others out of their experiences either. Let's take a closer look at what is being said.

The encounter with the risen one

Eight days later - as it is said - Thomas, the “doubter”, comes to his own and very special encounter with the Risen One. Again Jesus enters the room that is locked. He greets with the peace greeting and then turns to Thomas in a special way - in the way Thomas needs it. Not a trace of a reproach, not a trace of an instruction or a theoretical explanation.

No, the way in which Jesus meets Thomas here makes it clear that believing and understanding the resurrection is not first a matter of the head, but resurrection first of all has to do with encounter and touch. This is what we need so much in order to be able to believe and trust.

So Jesus approaches Thomas and he asks him to touch the marks on his hands and then to put his hand on the open side. This is the side of his heart, from which blood and water flowed on the cross - blood and water, both symbols for life, our two most important “juices of life”.

Touching the wounds of Jesus

But why is touching the wounds so important for Thomas? He wants to make sure that the risen Lord is also the crucified one. The resurrection does not erase Jesus' path and dedication to the cross.

If the resurrected one would no longer bear the stigmata, then he would have left his life and suffering behind. Then something essential that happened in the life of Jesus would have been wiped away. The resurrection is always directly related to suffering and the cross.

Thomas realizes: The risen One is the crucified one. He takes the wounds of his humanity with him to heaven. In this way he gives all those who suffer the certainty that their injuries and wounds are saved with God.

By touching his wound on the side, Jesus lets Thomas feel his innermost, his center. And Thomas can be touched inside, in his heart. The head, the thinking is no longer important, only the feeling of closeness, the feeling that everything is true. That Jesus is still there after his death on the cross and is noticeable and effective in the hearts and in the actions of his disciples.

Abolished in the event of suffering, the cross and the resurrection

So we are all lifted up with our lives - with our suffering, struggles and love - in this event of suffering, cross and resurrection of Jesus. The idea of ​​a heaven where everything old is simply forgotten and gone, where the lived and suffered history of each individual is not abolished and reconciled, such a concept is not the Christian one.

John Henry Newman, the famous English cardinal, once said: "To believe also means to be able to endure doubts". But that also means: if you have doubts, it does not automatically mean that you are weak in faith.

If I can endure my doubts and STILL cling to the faith that shows itself in my hope and joie de vivre, then this is downright a sign of strength of faith. Doubt is therefore always an opportunity, because it leads us deeper to ourselves and opens up new perspectives for us.

Put your fingers on the wounds of life

Faith in the resurrection - if it is not just a matter of the mind - needs the encounter with the wounds. He needs to accept pain, depression and fear, suffering, guilt and death.

In the figure of Thomas, the Evangelist John shows us so comfortingly that one does not inevitably have to despair or fail from the suffering and wounds of life, but can also mature from it. In Thomas we can see that it is often precisely the encounter with the wounds that makes the miracle of change possible.

I also see this as a great task for us as Christians and also as a church. Namely, that we work to ensure that a culture of coexistence exists and emerges in our society, in which weaknesses, failures, suffering and wounds also have their place, where they can also be expressed and addressed. And in which there is also a comforting and salutary way of dealing with it.

Injuries and wounds, suffering, pain, death and the "small" deaths of everyday life (disappointments, separations, failure, guilt ...) are usually among the best-kept secrets that we carry around with us.

For me there is hardly anything more touching than listening to people how they have found their way back into life after difficult and dark phases in life, how perhaps their faith has been or has been a support for them. Such people are witnesses of the resurrection to me.

Our belief in the resurrection is therefore directed against the suppression and concealment of the sore points of our life, including our coexistence. It is a belief “at eye level” with suffering, a belief that gets its fingers dirty and puts them in wounds. Belief in the resurrection is a belief with heart, hands and feet - and of course also with the head. And it is therefore also political, that is, it is also directed against the sore points in society, economy and politics. It shows where human life is restricted or threatened and where it can flourish and develop.

I thank you, Apostle Thomas and friend of Jesus, and I hug you inwardly that you have made this view of the resurrection possible for me and us!