Patent: Foldable from Samsung can be folded in several places

A newly emerged Samsung patent describes a particularly flexible smartphone. At first glance, the foldable looks like a phone in a classic bar shape, but on closer inspection, the wide hinge catches the eye. This allows the mobile device to be folded bidirectionally. During transport, the flexible screen of the Samsung smartphone can be protected on the inside and operated on the outside during use, if desired also on both sides. But the manufacturer goes one step further and has several folds in mind.

Samsung with a creative foldable idea

The Galaxy Fold is expected to appear in stores next month, but its implementation of the folding theme does not meet with approval everywhere. The bulky housing and the necessary camera armada - due to the construction - are compromises that the company accepts with its first foldable solution. 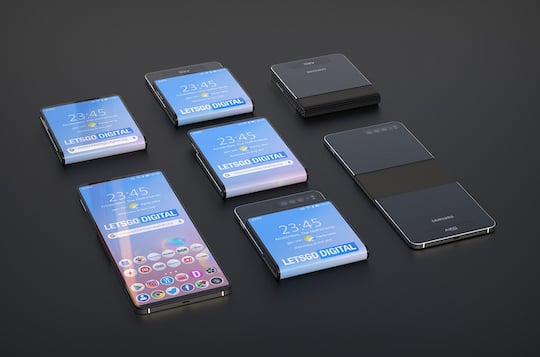 The folding positions of the Samsung concept
LetsGoDigital In the future, however, Samsung will send other variants of foldable smartphones into the race, a possible contender was recently discovered by LetsGoDigital. At the end of January, the South Korean company secured an unusual foldable design from the USPTO (United States Patent and Trademark Office) and recently from the WIPO (World Intellectual Property Office).

LetsGoDigital then again proved their skill in creating graphics and created render images that illustrate the concept. With this smartphone, the hinge is folded in several places.

How the new Samsung foldable works

Similar to the RAZR 2019, the mobile device including the flexible display inside can be opened. But the display can also be folded down, which means there is a small screen at the front and back. In combination with the possibility of having several folds due to the wide hinge, practical application scenarios arise. 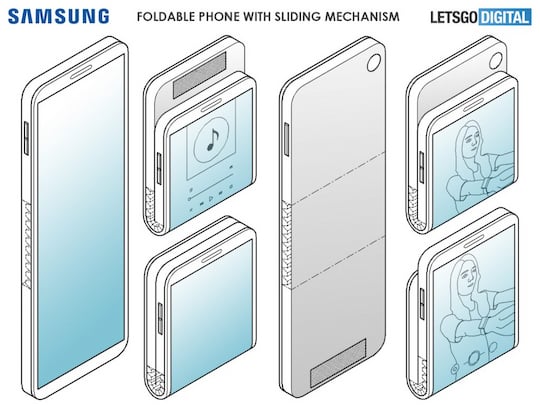 Application scenarios of the Samsung concept
LetsGoDigital / Samsung For example, a user could only bend the lower part of the display so far that he could still see the cameras on the back. Selfies with the main cameras are then easily feasible. Or the upper part is only bent over a little so that the loudspeaker on the back protrudes for the music system. Finally, an AI should recognize where the smartphone has been folded and adapt the user interface accordingly. When and whether Samsung will implement such a foldable remains to be seen.

Last week we reported about new foldable patents from Samsung and Huawei. You can read more on the subject in another message.