How did Berlin have such large sidewalks?

In Berlin, it is worth taking a closer look below. Instead of monotonously laid, square artificial stone slabs, you walk on the sidewalks in the old quarters mostly on 600 million year old granite slabs, affectionately known among connoisseurs as “pork bellies”. No two slabs are alike, all together form the characteristic stone band in the middle of the sidewalks, flanked on the left and right by a lively patchwork of different paving stones.

If the eyes are not fixed on the path just to avoid the dog deadlines, the sidewalks in the old building quarters always tell the knowledgeable their own story of natural stone, craftsmanship and street design. When the Prussian King Friedrich Wilhelm III. Significantly, he financed the pavement construction in Berlin, which began in 1835, with the help of the dog tax, but above all he had in mind that one no longer had to steer one's steps through the city with one's eyes to the ground.

A few years earlier, the Weinstube Lutter & Wegner had provided the defining model for the general construction of sidewalks on Gendarmenmarkt: In front of their restaurant, the owners had large, flat granite slabs laid in front of their restaurant as early as 1824 so that customers can enter the location with safe and clean feet could - an idea that convinced the Prussian king. When, in the course of the century, the paving and alluvial sewerage removed the stinking rubbish on the streets, comfortable walkways were created everywhere, on which one could safely promenade and stroll.

Since then, the heart of the Berlin sidewalks have been the usually one meter wide granite slabs, known as “pork bellies”. Cut smoothly at the top of the tread, the underside is left round and only roughly hewn. On this side, the whole thing resembles the belly of a pot-bellied pig, although you normally cannot see the actual belly. The heavy slab drills itself into the sandy Berlin underground and fixes itself with its stately weight. The slabs were laid in single or double strips, sometimes even three times next to each other, depending on the width of the sidewalk.

But even among the already imposing pork bellies, there is still an increase in size: the real showpiece is the Charlottenburg model. This stone has a double format, it is two meters wide and was laid on Hardenbergstrasse, among other places.

The size record is held by the “model Chalottenburg”

While the panel width is standardized, the length of the panels varies and can sometimes be well over a meter, so that almost square formats, narrow strips or large rectangles alternate. Each plate is unique, and their surfaces also differ from one another, many are matt gray, some have a reddish shimmer. Each weathered differently over time. Its blunt surface offers a safe step even when it is wet, while many newly laid stone slabs can easily slip as soon as it is just a little damp.

The safety regulations for pavement on public roads are otherwise rigorous these days. For example, the height difference between individual pavement slabs may only be 1.5 centimeters. Many pork bellies have shifted their position on the sandy subsoil to such an extent that there is a risk of tripping over the decades. Grinding the old panels again and straightening the edges is far too expensive today. Instead, the civil engineering department pours some asphalt as a makeshift to compensate for the height of these towering areas, or the slabs are discarded and reused in green areas, where the regulations are more relaxed.

If, as an exception, granite slabs are laid in Berlin again in order to preserve the historic cityscape, these stones are newly imported from China. The heavy cargo serves as necessary ballast in the hull during the long voyage on the container ships with the cargo piled high. The large stone blocks, for example in the pleasure garden, shine as if freshly polished and are sharp-edged. They lack the patina, just like those in the government district.

The mosaic pavement that stretches along the left and right of the granite lanes - also known as the upper and lower stripes of the sidewalk, was only added to the sidewalks from around 1880. Traditionally, Bernburger Rogenkalk, a light to medium gray limestone that is hard-wearing and abrasion-resistant and results in a varied surface, is traditionally found here. In the 19th century, when paving was the only way to create flat surfaces, a large number of tried and tested laying patterns were developed. In Berlin, the so-called Passeeplaster was usually laid, which enables a lively, endless surface and does not form a special graphic pattern such as arches. Nevertheless, the paving of the yoke follows precise rules in order to have a random and at the same time harmonious effect. The stones do not have to be pre-sorted according to size, but rather the paving stone - avoiding cross joints - is used as precisely as possible, with the direction of the joints constantly changing. This skill requires some experience.

The small-scale paving in the upper and lower strips is above all practical, because it can effortlessly cover lights, traffic signs, tree slices and other road elements, as it also integrates irregularities on facade protrusions, entrance stairs, cellar light shafts and downpipes into the surface.

From today's perspective, it is also extremely ecological that the stones were laid directly in the sandy subsoil without cement mortar, so that the rainwater can seep away directly into the paved areas, and the original stones can be used again after all repair work. However, the original stones were not always kept in the course of time, so that on larger paved areas, if you look more closely, you can also see traces of cables being laid to the houses. Usually the very small pavement with an edge length of 2 centimeters was replaced by larger stones.

The fact that loosely laid pavement is sensitive can always be seen where cars drive unauthorized over the sidewalk and move the stones simply because of their weight. Once the stones are torn from their compound, a larger area soon loosens and has to be re-laid.

The artist Gunter Demnig gives the Berlin pavement a completely different focus. Since 1995 he has been directing one's gaze to the ground with his so-called “stumbling blocks” to commemorate people who were murdered by the Nazi regime. The stumbling blocks are hand-cast concrete blocks with a brass plate on which names and dates of life are engraved. The stones are inserted into the sidewalk at the same level in front of the last house of the deportees. 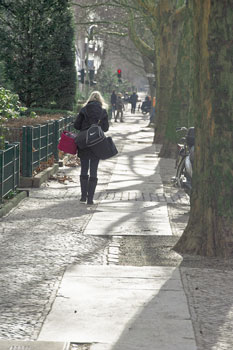 The heart of the Berlin sidewalk is the wide "pork belly" 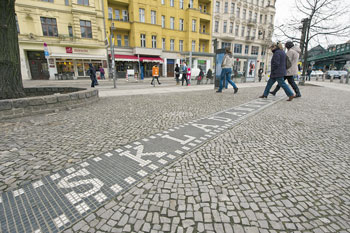 There are a large number of templates and design samples 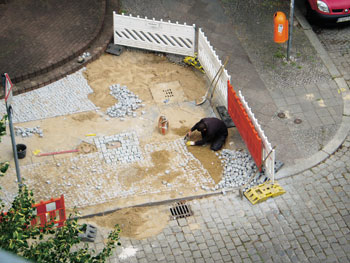 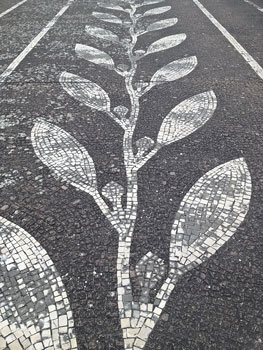 The craftsmanship of paving requires some experience 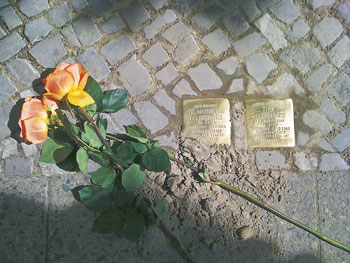 “Stumbling blocks” are reminiscent of the victims of Nazi crimes

Two field stones for Berlin
Hundreds of thousands of “pork bellies” made of “granodiorite” were transported to Berlin from Lusatia and Silesia in the 19th century. Since granodiorite is very hard and weather-resistant, it was the ideal material for the fast-growing metropolis of Berlin. The large stone slabs replaced the paving with the round field stones, the so-called cat's heads, which had been common up until then. These stones were erratic boulders that had been imported to Berlin at the king's behest. Every Prussian farmer had to bring two field stones with him when he came to Berlin and throw them off at the city gate.
js