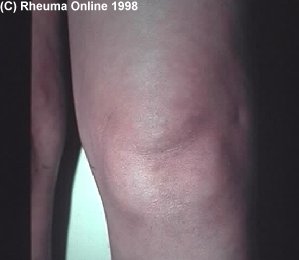 Photo credit: Priv. Doz. med H.E. Langer, Contrary to popular belief, a copper or magnetic bracelet does not help here - according to the results of a controlled clinical study

The belief in the healing power of magnets and the wearing of magnetic objects for joint problems has accompanied mankind for two millennia [1] - [2]. The amazing healings that the doctor Friedrich Anton Mesmer accomplished in the 18th century were called the doctrine of “animal magnetism” or “mesmerism”.

In 1830, the discovery that human blood contains copper sparked discussions about the extent to which there was a causal connection between a copper deficiency and rheumatism [4]. This resulted in a new therapeutic method - “metallotherapy”, in which those affected were instructed to wear copper washers or other metal objects.

Although early controlled studies attributed the effects of mesmerism and metallotherapy to purely psychogenic effects [5] - [6], these beliefs and practices still hold up today. Magnet therapy, in particular, is arguably much better known today than at any point in history, with annual worldwide sales estimated to exceed a billion pounds [7] - [8].

Copper bracelets and magnetic wrist straps, which contain either permanent magnets or copper, are widely touted for reducing pain and preventing the progression of musculoskeletal ailments. Remarkably, this also applies to rheumatoid arthritis.

Given this long history, it seems remarkable that only now British scientists have taken on the investigation of the effect of these bracelets in a study which, based on current knowledge of the study method, should lead to clear results. The study was carried out in a randomized placebo-controlled manner, with each patient serving as their own control.

In summary, the authors state that magnetic and copper bracelets have neither a statistically significant nor clinically relevant therapeutic benefit on rheumatoid arthritis. The bracelets used offered few, if not no, advantages that would have been better than placebo in reducing pain, inflammatory activity, restricted mobility and disease activity.

Read the full article in PLOSone