What is your opinion on Hitler's works of art

When Adolf Hitler determined what art is

Christian Philipp Müller rushes into the great hall of the House of Art in Munich. With this, the Swiss artist enters the place where Adolf Hitler threatened modernism in 1937 with a war of artistic purges. Here Müller set a counterpoint: instead of a swastika and a portrait of a leader, the larger-than-life picture of a young woman can be seen during a fashion show.

It's a snapshot: The Second World War is over, you long for lightness and color. A mannequin parades across the catwalk - past the spectators. Her face cannot be seen, just an absurdly large structure that is supposed to be a hat.

The picture from the fashion show represents the checkered history of the house. Here, of all places, the US occupation troops celebrated festivities after the end of the war, and even converted a hall into a basketball field. Then came the mannequins in the 1950s.

What the backs of the pictures reveal

"I was asked to intervene," says Christian Philipp Müller. His job was to advise the Haus der Kunst in dealing with its own history. Because that is very difficult. Adolf Hitler insisted on opening the "House of German Art" - as it was called at the time - himself. That was on July 18, 1937. From then on, the ideology of the National Socialists had to be found in art. It had to be suitable for the masses, easy to understand, with everyday subjects. Everything abstract was considered "un-German", was ostracized and forbidden. 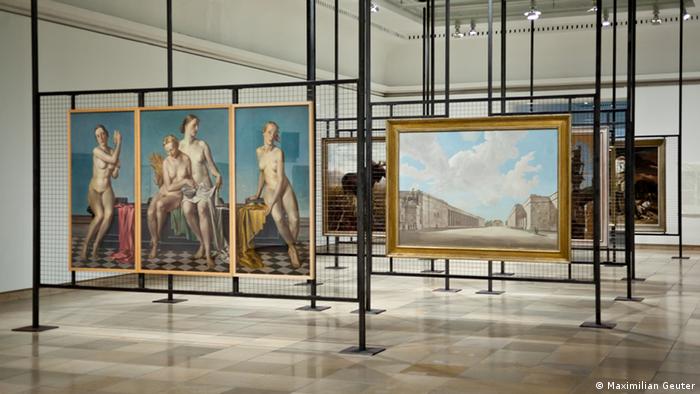 Interior view in the House of Art

75 years later the roles seem to have been swapped: what was forbidden at the time is now hanging on the walls of the exhibition room, while what was considered "German art" is attached to steel structures. They look like huge fences. This staging goes back to the "Intervention" by Christian Philipp Müller. The result: The backs of the "German artworks" come to light. You can also recognize the sticker on the back of the depiction of a destroyed French city: "Acquired from: the Führer" is written there. Other motifs shown: An elk deer in the German forest or a submarine stomping through the roaring Atlantic. The pictures seem bizarre and even by the standards of the time they seem to have fallen out of time.

While the Nazi greats all over the world showed what they understood by "German art", they opened the Feme show "Degenerate Art" almost around the corner at the same time: Everything that had a reputation in modern times was now banned: Picasso , Kandinsky, Beckmann, Klee. The New York Times commented on July 25, 1937: "Modernism is now forbidden." 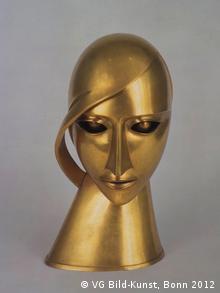 Embarrassing mishap: This work by Belling was considered "degenerate" ...

Embarrassing mishap: the organizers of the two shows - the "German Art" and the Femeschau - did not notice that an artist was present at both shows: Rudolf Belling. His sculpture of the boxer Max Schmeling was at the "German" art show, two others at the "degenerate" art. When those responsible noticed the embarrassing blunder, the two "degenerate" sculptures were discreetly removed.

The Nazi regime undauntedly celebrated the triumph of "German art" and its hometown. A model of the "House of German Art" had already been carried through the streets of Munich during the planning phase. The model was also proudly presented at the Paris Art Exhibition in 1937. In the pavilion next door was Picasso's Guernica - the most famous anti-war image of all. 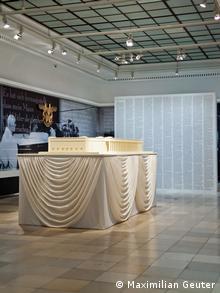 Model made from 160 kilograms of white chocolate

The Führer liked the building so much that Hermann Göring brought him a model of the house in gold for his 50th birthday. For the exhibition "75 Years House of Art" Christian Philipp Müller commissioned a model made of 160 kilograms of white chocolate - so to speak, alluding to the sweet, seductive power that Hitler's ideology had on the masses.

The Haus der Kunst has only been dealing scientifically with its own history since the mid-1990s, says Sabine Brantl, who curated the exhibition as a historian. Apparently they weren't ready for it right after the war. There was a tendency to return to "normality" in art as well, if possible not to remember the dogmas that were valid during the Nazi era. "That was locked away very quickly. Perhaps they didn't want to deal with the fact that the pictures had found taste among the masses." So they quickly plunged into the time of the economic miracle in order to suppress the past. 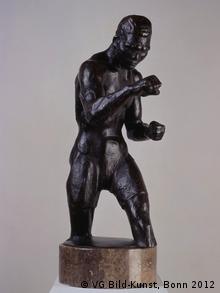 Okwui Enwezor is convinced that the present cannot be imagined without referring back to one's own past. The internationally respected curator from Nigeria has been director of the Haus der Kunst since the end of 2011. "The past here, the present there - there is no such thing. I always say that it is our job to think the present historically, after all, the present is always embedded in the past."

The documents in the archives can be brought to life by using them as an opportunity for reflection, says Enwezor. It was not planned that the exhibition "Bild-gegen-Bild", which also deals with the power of images, will run at the same time in the Haus der Kunst, but it fits in perfectly with the context. "There is a dialogue between the exhibitions. It's about how we use images and art, what worldview they convey." Images, media and the worldviews that result from them - these are topics that are as relevant today as they were then. You can see that twice as easily in the two exhibitions in the Haus der Kunst in Munich.