The graphic designer Sascha Lobe looks after brands and culture houses known around the world such as Adidas and the Bauhaus. In the interview, he describes how communication design has changed - and which projects he finds particularly exciting.

Mr. Lobe, you have been working as a graphic designer for more than two decades, and with your communication design studio you have looked after major brands such as Daimler, Adidas and Hugo Boss and carried out projects for renowned art houses and museums. In your opinion, how has graphic design changed in recent years?

Graphic design now operates very freely from constraints. On the one hand, the means of production have changed: a lot of things that a graphic designer used to need highly professional technology for or a trained expert such as a typesetter, he can do himself today. Intuitive programs allow him to cut film clips, incorporate music and design his own fonts. Graphic design today is incredibly diverse. You see a lot of minimalism, black and white, especially in the typography. On the other hand, the work is also very visually stunning, there are opulent and colorful collages. It's a bit like fashion: the big models and trends have dissolved, individualism sets the tone. 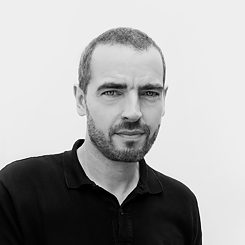 The graphic designer Sascha Lobe works with his Stuttgart studio L2M3 for international brands and cultural institutions, and has recently also been a partner in the London design studio Pentagram. He holds a professorship for typography at the Offenbach University of Design. | Photo: © Sascha Lobe You have carried out orders for a wide variety of customers and international institutions. Which project challenged you the most?

Our work for the Bauhaus Archive in Berlin was - and still is - particularly exciting. We have been developing a new visual identity here since 2014, i.e. a new appearance. A project that could easily have burned your fingers.

Because Bauhaus is an absolute myth. And as it is with myths: everyone has an opinion on it, and everyone believes they know how to do it even better. We saw it as a great challenge to consider: How do I summarize the image of the Bauhaus and convey it without becoming historical? So how do I transfer what Bauhaus stands for, i.e. design ideas from 1919, to 2018?

How did you go about it?

By carefully analyzing, deconstructing and reassembling typography and graphic design at the Bauhaus. An example: We took a font by the Bauhaus graphic designer Herbert Bayer as a starting point and made it a little more functional by smoothing it. Then we studied the construction principles of other typeface designs designed at the Bauhaus. We have revised and adapted them as so-called “alternative glyphs” - and added more than 500 of them to this font. In this way we were able to develop a graphic language that is clearly recognized as Bauhaus - but in a contemporary form.

Bauhaus is a very German design concept. What is currently happening in other countries in terms of graphic design?

A look at Asia is exciting: a lot has changed in South Korea in recent years. There are strong references to the so-called Swiss Style - a style that was big in the 1950s and 1960s. At that time, the look and logic were strict, grid-oriented, order and functionality dominated the design. The Koreans take this design as a technical basis and inspiration and blend it with their Asian optimism and an “anything goes”. This creates an exciting mix of styles which, in turn, has an influence on European design.

Are new styles emerging in European countries, perhaps in Italy, where you were guest speaker at the Torino Graphic Days festival this year.

No, there are no locally identifiable trends. I would even say: There is not even a special European style. Because what is designed in the USA is also the same as in Europe. The borders have dissolved in the last few decades.

Is there a project that you would like to implement - some kind of dream assignment?

I would like to refresh the Nobel Prize, give it a successful, well-thought-out overall appearance. That could be a challenging project. But I don't want to dream around, because: We are currently doing something really exciting for the National Library in Luxembourg. Here we conceptualize and design the orientation and labeling system for the new library building, a great task. I see it this way: the most exciting project is always the next.