What is a homopolar generator

It is known that the Faraday disk generator generates voltage even when the magnet rotates together with the conductive disk.

What is the mechanism behind the homopolar generator phenomenon? 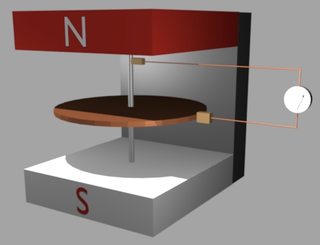 Wikipedia tells us that

The movement is azimuthal and the field is axial so the electromotive force is radial. ... When the magnetic field is supplied by a permanent magnet, it works the generator regardless of whether the magnet is attached to the stator or rotates with the disc .

The first very important thing that we have to put away with this electromagnetic induction process is the conclusion that the movement of electrons is the main cause of the correlation of electron movement within a magnetic field.

One of my questions: "The movement to what?". And the answer is the same as a rotating bucket of water: the rotation must create a centrifugal force.

As a naive man, I might assume that the electrons are being pushed to the outer edge, but removing the magnetic field will throw away such a guess.

So what pushes the electrons outwards in a rotation with the disk magnetic field? And why not inside? The answer is amazingly simple and is based on aligning the magnetic dipole moment of the electrons with the external field. At rest this alignment happens only once, but in motion - with kinetic energy - the electron emits photons and is thereby disaligned with its intrinsic magnetic dipole moment and the inductance circle starts all over again. (Incidentally, in order to prove the phenomenon of this radiation, one must compare the rise in temperature of the disc from an external electrical source with the same current produced by this homopolar generator.)

Does this mean that only a rotating, axially magnetized magnet can be used to generate electricity if its material is also conductive (like NdFeB magnets)?

This is really an interesting question, and the answer may depend on the material you are using. If you have a Use a disc made of pure element such as niobium and can turn such a disk into a permanent magnet, I assume that there is no induction. Simply the alignment of the 5s1 electrons will be destroyed.

It is known from super magnets that the components of the compound form an intermetallic compound (... a solid-state compound with a metallic bond, defined stoichiometry and ordered crystal structure). This makes it possible that the carrier of the permanent field (for example niobium) is present in a crystal structure and more than this is only slightly bound and can thus be easily aligned with its magnetic dipole moments. In addition to the component for the magnetic field, you also need the second component in order to have free electrons (metals) available or to "produce" free electrons in the composite constellation (complex oxide ceramics!).

After all, we have both a magnetic field and a conductive disk in one piece.