There is a molecule with an atom

Everything around us is made up of atoms or molecules. Plants, animals, people, the earth, the air, the sun and whatever else there is. However, the atoms and molecules are so small that you can neither look at them with your eyes nor with the most powerful microscopes.

The nucleus is in the middle of the atom. Around it the electrons form something like a cloud. For example, iron, copper or gold are made up of atoms. Helium also consists exclusively of atoms. You need it as gas for balloons. In total there are at least 118 different atoms.

Molecules have multiple nuclei and a cloud of electrons around them. A simple molecule is water. There are so many different molecules. People can also change them themselves, for example when they burn something or make medicines.

Humans can also change atoms. In a nuclear power plant, large atomic nuclei are split into smaller parts. The element uranium is used for this. This creates a lot of heat that is used as energy. What is going on there is called "nuclear fission".

The opposite happens in nature: For example, on the sun and on the stars, the opposite happens: Several small atomic nuclei merge into one large one. That has to do with the element helium. This creates enormous heat. This process is called "nuclear fusion". Many scientists are tinkering with it, but they have not yet succeeded in imitating it and thus generating energy themselves.

The name "atom" comes from the Greek word "atomos", which means: "the indivisible" or "the indivisible". Some Greek philosophers thought it up. They observed nature about 2500 years ago and tried to explain what they were seeing. A good idea of ​​atoms and molecules has only been around since 1900. Today we know that atoms are divisible after all. 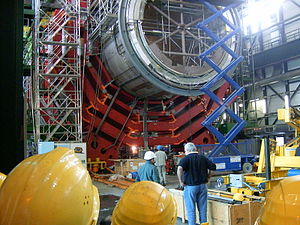 One of the measuring devices at CERN is a research institute in Geneva. The device is over 20 m high. The aim is to study atoms and discover even smaller particles.

With very modern special microscopes you can make atoms visible. They then appear as fuzzy spheres. However, this is only a computer representation. Because atoms actually consist of a nucleus and a so-called electron shell. The shell only results from the fact that the electrons whiz around the nucleus so quickly that one thinks they are everywhere at the same time. When the electrons can be detached from the atoms and move on, an electric current flows.

There are two types of particles in the atomic nucleus: protons and neutrons. The protons are positively charged. They hold the electrons as if on an invisible thread because they are negatively charged. They attract each other in a similar way to the two different poles of magnets.

Atoms differ in the size of the nucleus. So you have more or less protons and neutrons. The smallest of them is hydrogen. This is a gas and should not be confused with water. Hydrogen has first place in the periodic table of the elements. This is a table that shows all the types of atoms.

For physicists, the atomic components protons, neutrons and electrons are too imprecise. You are familiar with the smaller components. But to really understand that, you have to at least go to high school or even university.

Different atoms have joined together in a molecule. We know the water best. It's a very simple molecule. It consists of two hydrogen atoms that have bonded with an oxygen atom. The chemist writes it like this: H2O. H2 means: there are two of hydrogen. O stands for oxygen, and only for one atom. It's pronounced like this: Hah-two-oh.

You can easily manufacture or modify molecules yourself. All you have to do is light a piece of wood, paper or something else. Then the atoms or molecules combine with oxygen. For the most part, this produces the gas carbon dioxide. We can also just breathe, then we blow out carbon dioxide, which our body made itself.

Humans can also produce molecules in a targeted manner. There are large companies that are researching this. You are looking for new materials or drugs. To do this, they change molecules or assemble new ones.

Is the world made up entirely of atoms and molecules?

You have to answer this question with yes and no. First, there are the smaller parts. But electrons that move through a line as an electric current are neither atom nor molecule. Light is neither one nor the other, but something completely different.

But a lot also consists of a mixture. Bronze, for example, is made of copper and tin. These atoms lie next to each other in the bronze. They are not linked together as molecules. So bronze is a mixture of atoms.

The air is also a mixture, made up of different molecules. Oxygen and nitrogen are part of it. Depending on this, there is more or less carbon dioxide in it and many other gases. Tiny water droplets are also part of it.

All plants or animals also consist of a mixture, mostly of molecules. The secret of nature is also the ingenious arrangement of the various atoms and molecules and how they work together.

There is also an article on “Atoms and Molecules” for beginners on MiniKlexikon.de and other search results from Blind Cow and Ask Finn.