How would you make goatskin fireproof?

Leather is hardly flammable. If you hold a lighter to a piece of leather, it will indeed shrink and burn, but it will hardly or not continue to burn. It is therefore easier to make leather flame retardant than with other materials. Synthetic leather is much more flammable than real leather.

Leather in aircraft, but also on ships, trains or buses, must meet minimum fire protection standards. However, there are also requirements for flammability in public buildings (hotels, waiting areas at airports, administration buildings, old people's homes, etc.). Leather that is used in gastronomy or in public areas is also called contract leather. 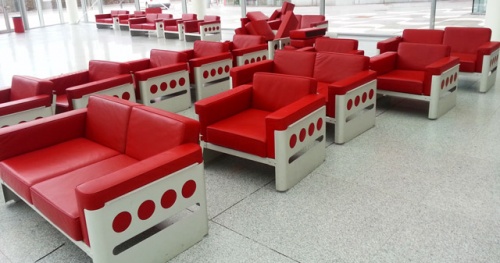 The requirements are very high, especially for aircraft leather. The necessary properties must be taken into account when tanning. This is done through various measures in the manufacturing process. 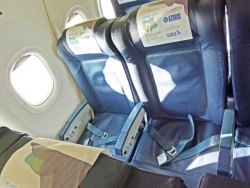 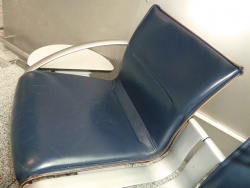 Whether in the aircraft seat or in the waiting area, the standards are strict.

A tanner needs to know right from the start that leather should meet fire protection standards. The flammability and the generation of smoke must be taken into account. Many work steps in the tannery have to be adapted accordingly. The selection and amount of retanning agents, the amount and selection of refatting agents and the addition of flame retardants are important. In the literature it is mentioned that the chromium content in the leather should be below 3.5% during chrome tanning and that refatting agents based on fish oils perform worse than other refatting agents. Synthetic oils are also mentioned as problematic. The leather fibers must not be too loose either.

There are a lot of legal regulations and standards, and many countries have their own regulations. Some of them are described below. 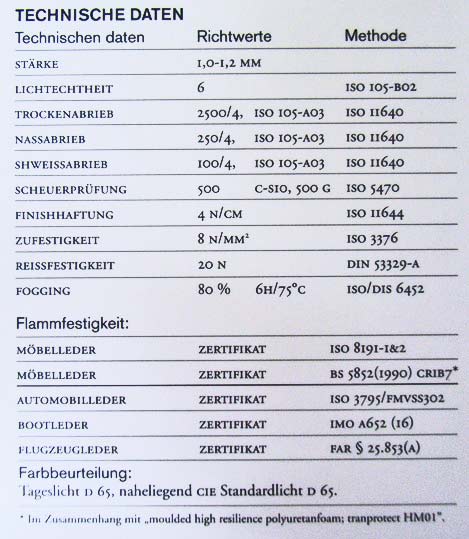 Leather can be tested according to a wide variety of standards.

The fire protection standards for leather

The following standards appear in connection with leather: FAR 25.853 a) and b): For the equipment of airliners, private jets or sports machines. In this test, a test specimen is exposed to a vertical flame with a Bunsen burner flame (800 ° C.) for 12 seconds. The flame must extinguish itself after 15 seconds and the flame must not have spread further than 203 mm.

DIN 4102: Fabrics for upholstered furniture are divided into classes according to their burning behavior and their flammability. B1 à flame retardant, B2 à normally flammable. The A classes deal with non-flammable substances.

DIN 4102 Part 1 - small burner (B2): In Germany, all materials for use in construction must meet the requirement of "normal flammability", which is checked by means of a small flame test. The swatch is hung vertically and exposed to a 20 mm high flame for 15 seconds on the surface and the edge. Reference lines are marked on the sample and the B2 requirement is met if the tip of the flame does not reach the reference marks within 20 seconds for each sample. 5 samples are tested, whereby the filter paper underneath shows whether flame residues have dripped down.

DIN 4102 parts 15/16 - Brandschacht (B1): This test, known as the "Brandschacht Test", is the most frequently performed test method in Germany, which measures the reaction of flammable and non-flammable products to fire, and is the country's most demanding flammability standard for upholstery fabrics. The name Brandschacht refers to the test device, which consists of a vertical chimney with a square cross-section and a gas burner. Four swatches are placed vertically in a holding frame and exposed to the flames for 10 minutes. At the same time, a constant, uniform flow of air is blown into the fire shaft from below. When evaluating the test, the flue gas temperature and the mean remaining length of the samples (the part that is not burned) are taken into account. In order to be classified according to B1, the tested substance must have the following: An average remaining length of not less than 150 mm, whereby no sample may be completely burned and an average smoke gas temperature of less than 200 ° C. An increased amount of smoke gas leads to the restriction of "strong smoke development", a burning droplet leads to the note "Material is burning dripping off".

BS 5852 1990 (Great Britain): Definition of a test method in which a specially constructed model simulates an armchair, as described in EN 1021. The foam used is not specified. Of the eight ignition sources, source 0 (cigarette), source 1 (butane flame / simulated match) and source 5 (wood fire 5) are used the most. The heat intensity roughly doubles compared to the previous ignition source if you select the next ignition source on the scale. The requirements for the cigarette and match tests are the same as those described in EN 1021, although the time the match is held against the sample was 20 seconds before the European Standard was introduced. The test with ignition source 5 is very tough, as the intensity of the heat increases sharply due to the crib shape of the pile of wood. The wood is placed on the test model and ignited with an alcohol-soaked fuse within 2 minutes. To pass the test, all flames should go out within 10 minutes.

EN 1021 - part 1: In part 1 of the test, a lit cigarette is placed in the corner of the test model and glows over its entire length. After 60 minutes, the fabric shouldn't smolder or burn.

EN 1021 - part 2: A 35 mm high butane flame represents a burning match and is also placed in the corner between the back and seat of the test model for 15 seconds. After the flame is removed, the fabric should not start to burn within 2 minutes.

EN 13501 - Part 1: Similar to DIN 4102-1, the fire behavior of building materials for use in construction is tested and classified here. Different test methods such as the "small burning box" or the "single burning item" are used, which in various combinations result in the classification in the corresponding classes. This standard applies throughout Europe and is intended to gradually replace the fire test standards such as DIN 4102-1 that apply in the individual countries in order to enable a uniform procedure.

Can leather be made flame retardant afterwards?

The question often arises as to whether leather that has already been processed can be treated retrospectively in order to meet a standard. Be it that a leather was offered for a tender that does not yet have a certificate, or because the leather has already been bought or even processed.

First and foremost, you should ask the tanneries (or the leather dealers at the tanneries) which standards are already met with this type of leather. If no standard has been tested, then it must be assumed that it will be problematic. The lower the requirements placed on the leather, the more likely a retrospective test can show that the leather conforms to the standard. A test to determine whether a leather meets the standard is always material-destructive.

With the high requirements such as "B1 according to DIN 4102-1" or "FAR 25.853", it is unlikely that the leather complies with the standard, as these standards can only be met by consciously observing the tanner in leather production. Only if a comparable national or foreign standard is met is there hope that the required standard will also be confirmed by appropriate tests.

According to the current state of the art, there is no treatment method that subsequently changes leather that does not conform to the standard in accordance with the standard.

Furthermore, subsequent treatment methods such as chemical or wet cleaning, washing, painting, printing, etc. can reduce the fire behavior z. T. affect negatively. These things should either be taken into account in the test or excluded from use and the product should be given a clear warning in the appropriate wording.

Films about leather and high temperatures

Film about the effect of heat on leather.