What do you think of table tennis

Learn to play table tennis and improve it with videos.

It depends on the technology

Wherever and however you compete against your table tennis opponents: It is not uncommon for the stroke technique to decide whether you win or lose. Players already have a choice when it comes to holding their clubs. So two styles have established themselves:

The shakehand posture is widespread in Europe. As the name suggests, you grip the club as if you were shaking hands with someone: the middle and ring fingers as well as the little fingers encircle the handle of the club, the thumb is on the forehand and the index finger on the back of the club face. With the thumb and forefinger, the club angle can be controlled better, the club can be fixed better in the hand and the contact with the ball can be perceived better than if one were to hold the handle with all five fingers.

In Asia, on the other hand, the penholder position is popular, where you hold the club like a pen: thumb and forefinger encircle the handle of the club, while the other fingers are placed on the other side of the club. The penholder style generally allows more wrist use, but backhand strokes are only reserved for absolute professionals. 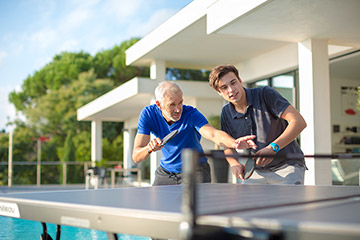 There are also several Attack and defense strokes with different spin. Spin means the rotation of the table tennis ball around its own axis. Attack strikes include:

The topspin is one of the most important attack strokes in table tennis. The ball is cut with a very fast upward movement. This gives it a forward spin, which curves the trajectory downwards. The effect: the balls bounce off the table tennis table much more flatly.

For a sidespin, the ball has to be played with a side cut, that is, with an oblique upward movement. The ball then turns sideways on impact. The sidespin is mainly used for table tennis serve, but is used by experienced players not only in the face-off, but also as a surprise stroke in the rally.

When you hit the ball, you try to give the ball the greatest possible speed. So it takes a lot of effort to hit a ball: the use of the whole body and a large, fast arm movement are prerequisites for a successful ball. The ball is «shot» at the opposing half at the highest point.

The flip is a technically demanding attack on short balls. It is played for a long time to put the opponent under pressure. The characteristic is the tilting movement from the wrist, which is necessary for a flip.

Of course there are also different ones in table tennis Defensive strikes. These include:

The undercut or Schupfball is a counter strike with an undercut. The ball is cut with a very fast downward movement and little advance so that it rotates backwards. The undercut usually serves as a safe return on spin balls and can slow down the game a little.

The balloon defense is suitable for the removal of butterfly balls. Therefore, the player stands far behind the table tennis table and plays the ball back very high with top or sidespin, so that it hits as far back as possible on the opposing half of the table.

With the block, attack balls are returned early from a position close to the table. The block is particularly suitable as an answer to topspin balls. The player actually only lets the ball bounce against the racket without making a backward movement. The effect: the ball is slowed down and its spin is reversed.

In defense against cuts, the ball is played with a strong undercut - but the ball is taken off extremely deeply, sometimes just before contact with the ground. This way, a maximum undercut is possible without the ball flying over the opposing half of the table due to the lift it receives from the spin.

The counterball is very similar to the block - with the difference that a short backward movement gives the ball additional speed. So the opponent can be put under more pressure.

All right? All you need to practice is a suitable table tennis table.
Click here for the TT table purchase advice.