What is meant by skipping metastases

One of the fears associated with breast cancer surgery is the fear of complications and permanent consequences of removing the lymph glands in the armpit area. The "sentinel lymph node procedure" renders this fear irrelevant.

Lymph nodes are "filters" that catch everything from the lymphatic system that has nothing to do with it: toxins, pathogens, cell fragments, and possibly breast cancer cells that have migrated with the lymph. The sentinel node is the lymph node to which the lymph from the tumor area flows first. Only then does it reach other lymph nodes in the armpit area. This lymph node "watches" over the other lymph nodes. It is very likely that it is also the first lymph node in which tumor cells settle.

How does the sentinel lymph node principle work? 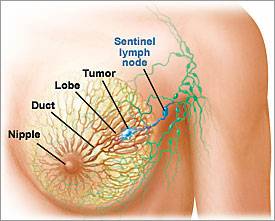 Lymph nodes that are infected with cancer must be removed in order for the disease to heal. However, the surgeon has not yet been able to know whether or which lymph nodes contain cancer cells at all. If many of the armpit lymph nodes are removed, there is a risk that they will be removed unnecessarily. This could especially be the case in women whose tumor was discovered early.

What is the advantage of the sentinel lymph node method?

If the operation in the armpit area turns out to be smaller as a result of this procedure, problems such as restricted movement of the arm, sensory disturbances or lymphatic congestion occur much less frequently. Those affected are fit again sooner after the operation and can soon be back in sports.

For the security of the procedure