Is he the strict father or the loving mother? If he's so omnipotent, why doesn't he intervene where people are suffering? Our ideas of God know no boundaries, but neither do questions about God. And that's good.

The old pastor comes to heaven's door after a faithful life in the service of the Church. But when Peter opens the door, he cannot do anything with the pious little man, especially since he is not on any list of newcomers. The pastor can hardly believe it, asks and begs even in perfect Latin, but Peter remains stubborn: "You can't come in here." Wait a minute, then he whispers: "She is black!"

Just kidding, of course. But one who has it all: God is female and dark-skinned, English is spoken in heaven, and not even a faithful priest can be sure of getting inside. The message is clear: God is very different from what we imagine him to be.

"God is only human too" 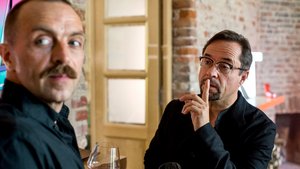 "God is only human too" was the title of the Münster “Tatort” (first broadcast on November 19, 2017, Das Erste): a set with Jan Josef Liefers as Professor Boerne (right) and Aleksandar Jovanovic as action artist Zoltan Rajinovic, known as “G.O.D.” | Photo: WDR / Wolfgang Ennenbach

Even the latest Münster “Tatort” (first broadcast on November 19, 2017) was about God and the images of him. However, everything revolved around an artist who - not very modestly - called himself God, and pictures of him, more precisely: works of art, which he sometimes only passed off as his. An arrogant egomaniac, removed from reality by the art scene, adored in his uniqueness. But then the picture crumbles, the great master is exposed as a blender. Finally it becomes clear what the title of this crime scene means: "God is only human."

So who or what is God? "He is not a controller looking for tickets that have not been stamped," says Pope Francis. So God is just the way most people know him from their childhood: the "dear God"? Who cannot and does not want to harm anyone?

In the beginning: children's belief

Exactly! God is the good Lord. Or, as the Bible says: "God is love." Pope Benedict XVI. wrote a whole encyclical about it. So great is the love of God, it says, that he continues to love even when his people Israel turn against him. “God should actually judge, reject,” writes Benedict. “But right now it is becoming apparent that God is God and not a person. ... The passionate love for his people - for people - is at the same time forgiving love. It is so great that it turns God against himself, his love against his righteousness. "

How do you imagine God? How has your image of God changed? Write to us at: [email protected], keyword “God's image”.

The fact that the “dear God” is so popular has less to do with high theology than with simple life experience. Because the way we imagine God has its roots above all in childhood, the time of basic trust and unconditional security - at least in most biographies: there is someone there who loves and wants me and without whom I cannot live. Literally in childhood.

And yet from an early age people also know the fear of losing this security and the dearest people. On the one hand, this increases the longing for this love, on the other hand, it also increases the effort to always earn it through performance and good deeds.

No wonder, then, that the image of the dear God is joined by that of the jealous God, whose wishes absolutely need to be satisfied: Nothing can happen to anyone who keeps his commandments and adheres to civil customs. "Otherwise God won't love you anymore!" And so the good news from the God of love became the threatening message from the God of blows. Light is only gradually coming to light on these dark chapters in recent social, family and church history.

So far so good. But how does it fit into the image of God that He lets people die innocently - as victims of violence, disease or environmental disasters? Where is he there, the good Lord? In such situations even the comforting reference to the resurrection cannot help; it is even forbidden. Likewise the interpretation that has been widespread for centuries that God punishes people for their sins with calamity. Not only was it cheap, it was irresponsible and often a pure abuse of power. What to this day does not prevent some churchmen from scourging diseases such as AIDS or Ebola as a punishment from God instead of helping the sick and protecting the healthy. 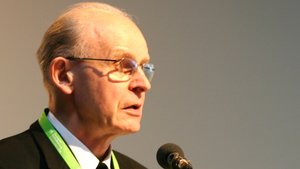 The adult faith faces the suffering of the world - "even if it is with an outcry against the sky", says Franz Kamphaus, until 2007 Bishop of Limburg. | Archive photo: Markus Nolte

When the massive tsunami in the Indian Ocean killed more than 230,000 people in 2004, the then Limburg bishop Franz Kamphaus reacted with an apparent impertinence: today's conceptions of God correspond to the dreams of a society free of suffering that cannot tolerate wounds and pain. Adult faith, however, confronts the suffering in the world - “even if it is with an outcry against heaven”. There is no God who fits in easily with one's own wishes and dreams. God himself is a "victim of the catastrophe".

This is what the image of God stands for: Jesus, the incarnate, suffering, and dying God. He says of himself: “He who sees me sees the father.” In this respect, there is some truth in the “Tatort” title from last Sunday: “God is only human too.” And that is not so little; after all, every person is regarded as God's creation, even as his likeness. Most clearly recognizable in the poor, the sick, the disenfranchised. 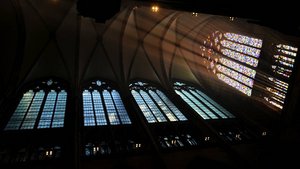 Whether merciful or judging, omnipotent or compassionate: Ultimately, God remains incomprehensible. This is what clever theologians say, and many pictures in art also show it. On the one hand there is the rushing Creator God with flowing hair and white beard by Michelangelo, on the other hand the famous church window by Gerhard Richter in Cologne Cathedral, in which one can perhaps see that God cannot be recognized.

Whether as a black woman or a white man, as a dear or punishing God, as universal energy or a pure dream - there is probably something to the insight that the theologian Karl Rahner put into his mouth: “Thank God there is no such thing 60 to 70 percent of contemporaries introduce themselves as God. "

"God is like a housekeeper"
The Bible forbids forming an image of God - and yet it is full of it. In the new edition of the weekly newspaper "Kirche + Leben" Father Daniel Hörnemann presents the abundance of biblical images of God. And we present the five most popular self-made images of God from the “pocket god” to the “bean counter god” - not without self-irony. Order “Church + Life” here as an e-paper! Find out about our attractive subscription offers such as a three-week free trial subscription!