Sarcopterygii (/ sɑːrˌkɒptəˈrɪdʒiaɪ /; from the Greek σάρξ sarx, meat and πτxρυξ, fin) - sometimes as a synonym for Crossopterygii ("Fish with marginal fins", from the Greek κροσσός krossos, edge) - is a clade (traditionally a class or subclass) of the bony fish, its members as Lobed fin fish are known. The group Tetrapoda, a super class with amphibians, reptiles (including dinosaurs and thus birds) and mammals evolved from certain sarkopterygians; According to a cladistic view, tetrapods themselves are viewed as a group within Sarcopterygii.

The living non-tetrapod sarkopterygians include two types of coelacanths and six types of lungfish.

Guiyu oneiros, the earliest known bony fish, lived during the late Silurian 419 million years ago). It has the combination of stingray fin features and lobed fin features, although analyzing the entirety of its features brings it closer to lobed fin fish.

Early lobed fin fish are bony fish with fleshy, lobed, paired fins attached to the body by a single bone. The fins of the lobed finfish differ from those of all other fish in that they are each carried by a fleshy, lobed, scaly stem that extends from the body. The scales of the sarkopterygians are real scaloids, consisting of lamellar bones, surrounded by layers of vascular bones, dentin-like cosmin and externally keratin. The morphology of tetrapodomorphs, fish that resemble tetrapods, gives clues about the transition from water to terrestrial life. The pectoral and pelvic fins have joints that resemble those of tetrapod limbs. The first vertebrates of the tetrapods, basal amphibian organisms, had legs that were derived from these fins. Sarkopterygians also have two dorsal fins with separate bases, in contrast to the single dorsal fin of Actinopterygians (ray fin fish). The cerebral shell of sarkopterygians has a primitive hinge line, which is lost in tetrapods and lung fish. Many early Sarkopterygians have symmetrical tails. All Sarkopterygians have teeth made with real tooth enamel.

are covered. Most of the species of ragfish are extinct. The largest known ragfish was Rhizodus hibberti from the Carboniferous Period of Scotland, which was possibly longer than 7 meters. Among the two groups of existing (living) species, the coelacanths and the lungfish, the largest species is the coelacanth in the West Indian Ocean with a length of 2 m and a weight of 110 kg. The largest lungfish is the African lungfish, which can reach 2 m (6.6 ft) in length and weigh up to 50 kg (110 lb).

Taxonomists who belong to the cladistic approach also include the grouping Tetrapoda within this group, which in turn consists of all kinds of four-membered vertebrates. The limbs of the lobed fin fish like the Coelacanths show a strong resemblance to the expected ancestral shape of the tetrapod limbs. The lobed finfish apparently followed two different lines of development and are accordingly divided into two subclasses, the Rhipidistia (including the Dipnoi, the lungfish, and the Tetrapodomorpha

The following classification follows Benton 2004 and uses a synthesis of the rank-based Linnean taxonomy and also reflects evolutionary relationships. Benton added the superclass Tetrapoda to the subclass Sarcopterygii to reflect the direct descent of tetrapods from lobed finfish, although the former has been assigned a higher taxonomic rank.

The cladogram shown below is based on studies compiled by Philippe Janvier and others for the Tree of Life web project, Mikkos Phylogeny Archive and Swartz 2012. 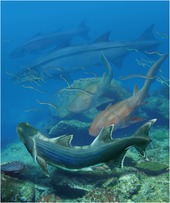 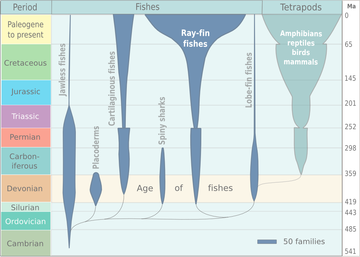 Spindle diagram for the evolution of lobar fin fish, tetrapods, and other vertebrate classes.

Lobar fin fish (Sarkopterygians) and their relatives the ray fin d fish (Actinopterygians) comprise the upper class of bony fish (Osteichthyes), which are characterized by their bony skeleton rather than cartilage. Otherwise there are great differences in the fin, respiratory and circulatory structures between the Sarcopterygii and the Actinopterygii, such as B. the presence of cosmoid layers in the scales of Sarcopterygians. The earliest sarkopterygian fossils found in the uppermost Silurian (approx. 418 Ma) were very similar to the Akanthodians (the "prickly fish", a taxon that became extinct at the end of the Paleozoic). While in the early central Devonian (416–385 Ma), while the predatory placoderms dominated the seas, some sarkopterygians came to freshwater habitats.

In the early Devonian (416–397 Mya) the Sarkopterygians split into two main lines: the Coelacanths and the Rhipidists. Coelacanths never left the oceans and their heyday was the late Devonian and Carboniferous from 385 to 299 Ma, as they were more common during these periods than any other period in the Phanerozoic; Coelacanths (genus Latimeria) still live in the open (pelagic) oceans today.

The Rhipidists, whose ancestors probably lived in the oceans near the mouth of the river (