Just as there cannot be Game of Thrones without dragons, a Game of Thrones recipe series is not complete without Daenerys Targaryen's dragon eggs. That's why today I have my recipe for Game of Thrones Dragon Egg Macarons to coincide with the start of the final season.

Daenerys dragons in Game of Thrones

Daenerys Stormborn of the House Targaryen, First of Her Name, the Unburnt, Queen of the Andals and the First Men, Khaleesi of the Great Grass Sea, Breaker of Chains and Mother of Dragons gains a pretty impressive reputation over the course of the series.

In season 1, however, she received a very special gift from her host Illyrio Mopatis for her wedding to Khal Drogo, which will have a decisive influence on the course of history. Three supposedly petrified dragon eggs are presented to her in a large wooden chest.

The dragon eggs & their colors

For the colors of the dragon egg macarons, I used the descriptions from the book as well as the scenes from the series as a guide. Here you can see the eggs and the dragons that later hatch from them.

The kiteRhaegal names Daenerys after her long-dead brother - Rhaegar Targaryen. He hasemerald green and bronze scales and yellow-orange wings.

The cream and gold colored dragon Vision with its orange-red scales bears the name of her recently deceased brother Viserys Targaryen. He died from a crown of molten gold given to him by Daenerys.

Drogon, the red and black Dragon, is the largest and wildest of the three and named after her husband, who has also passed away.

If you also want to make your dragon egg macarons in different colors according to the three dragons from Game of Thrones, you can either prepare the recipe three times in a row and color them in one color each time. Or you can divide your mass into 3 equal portions in front of the so-called macaroonage. You can then color them differently.

You can either make a large number of small dragon eggs from the specified quantity, or a smaller number of large dragon eggs. Since I was a little too impatient when making the dough for the little dragon eggs and finished the macaronage too early, they cracked while baking.

Instead of annoying me about it, I noticed that the macarons actually looked like little baby dragons had just hatched from them. That's why they deserve a place in this recipe despite minor blemishes.

Before the petrified dragon egg macarons can be placed in the noble wooden box, you should print out the appropriate template at the beginning. This way, your macarons are guaranteed to get the right egg shape and all of the same size. I have drawn two different dragon egg sizes for you in the practical print template for download.

Depending on the size, 2 printouts fit next to each other on each baking sheet. Then put a piece of baking paper over it.

Keep baking paper in shape
To prevent the parchment paper from rolling up again or slipping when the dough is sprayed on, you can fix it to the corners of the baking sheet with a few magnets.

As always when baking macarons, this is what it comes down to Weighing accurate to the gram of the ingredients. You can separate the eggs for the required amount of protein 3-4 days in advance and keep them neatly wrapped in the refrigerator. Or you can freeze them if you only needed egg yolks for a recipe and defrost them in the fridge the night before. Before you use the egg whites, however, they should be restored Room temperature Have accepted.

Your almonds should definitely be re-ground. The finer they are, the nicer and smoother your macarons will be. But be careful: if you chop them up too long, oil will leak out at some point. So everything in moderation. Afterwards, you should also sieve the ground almonds two or three times, catching coarse particles.

The batter for the dragon egg macarons

For the macaron mixture, first mix the finely ground almonds with the powdered sugar. Sift through both again together.

Now add the first portion of your protein (72g) to the almond powdered sugar mixture and stir it into a marzipan-like mass. You can either color this mass with food coloring if you want to bake your macaron bowls in just one color. Or you wait until the dough is almost ready, then divide it into three parts and color them according to the dragon colors in dark red, orange gold and emerald green. Either way, you should first cover the mixed mass with a clean, slightly moistened kitchen towel and set it aside.

At the same time, water and sugar are put in a small saucepan. Checked with a sugar thermometer, you can now boil a syrup out of it and apply it 110 ° C.

Once the sugar syrup has reached the desired temperature, add the second half of the protein mixture to the food processor and whip it until stiff. During this time, the temperature of the syrup should now rise 116 ° C to 118 ° C have continued to climb. Take the pot off the plate and pour the syrup slowly, evenly and in a thin stream over the egg foam. This process "boils the proteins" and the foam gains stability.

Keep stirring the mixture with the food processor until it cools back to room temperature. This takes about 5 to 10 minutes. You should now draw shiny white tips.

Now you can fold the egg foam into the prepared almond mixture. This step is particularly critical in macaron making. Because you can stir the mass too much or too little.

If you haven't colored your macaron mixture before, you should now divide both the almond and the meringue mixture into 3 bowls, accurate to the gram. Add the desired food coloring in powder or gel form. And stir everything carefully together.

Use gentle, circular motions from the outside in to make the macaroon. After about 70 to 80 stirring movements you should have a smooth-flowing mass in front of you that is slightly more fluid than choux pastry.

Spray on the dragon egg macarons

You can now put the macaron dough in a piping bag with a medium-sized, round perforated nozzle. Spray the dough vertically onto your template while applying gentle pressure.

Then lift the baking trays up a little and let them fall gently back onto the work surface. Or knock on the sheet metal from below. This step causes trapped air bubbles to rise to the surface. You can then carefully "stir" this with a toothpick. 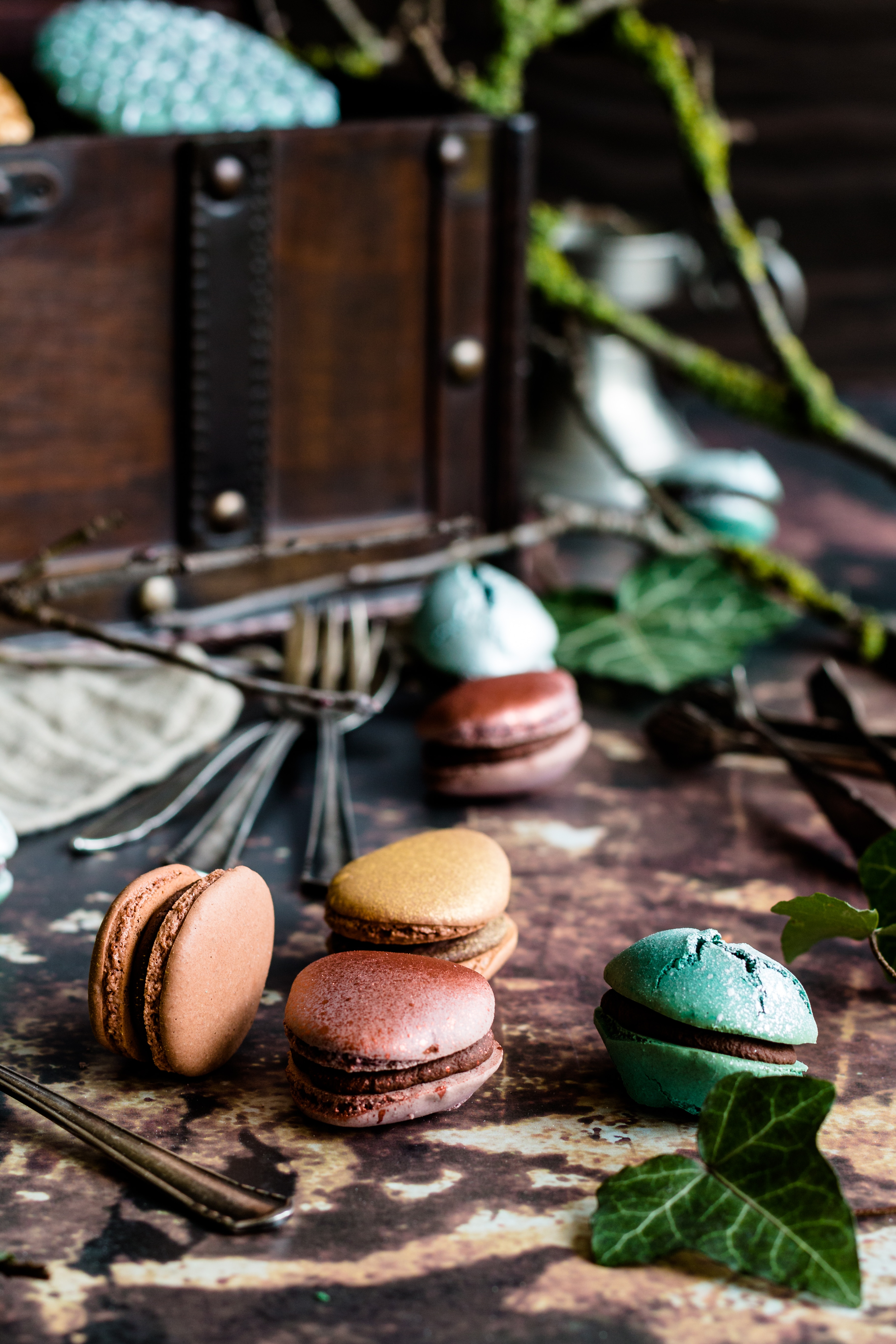 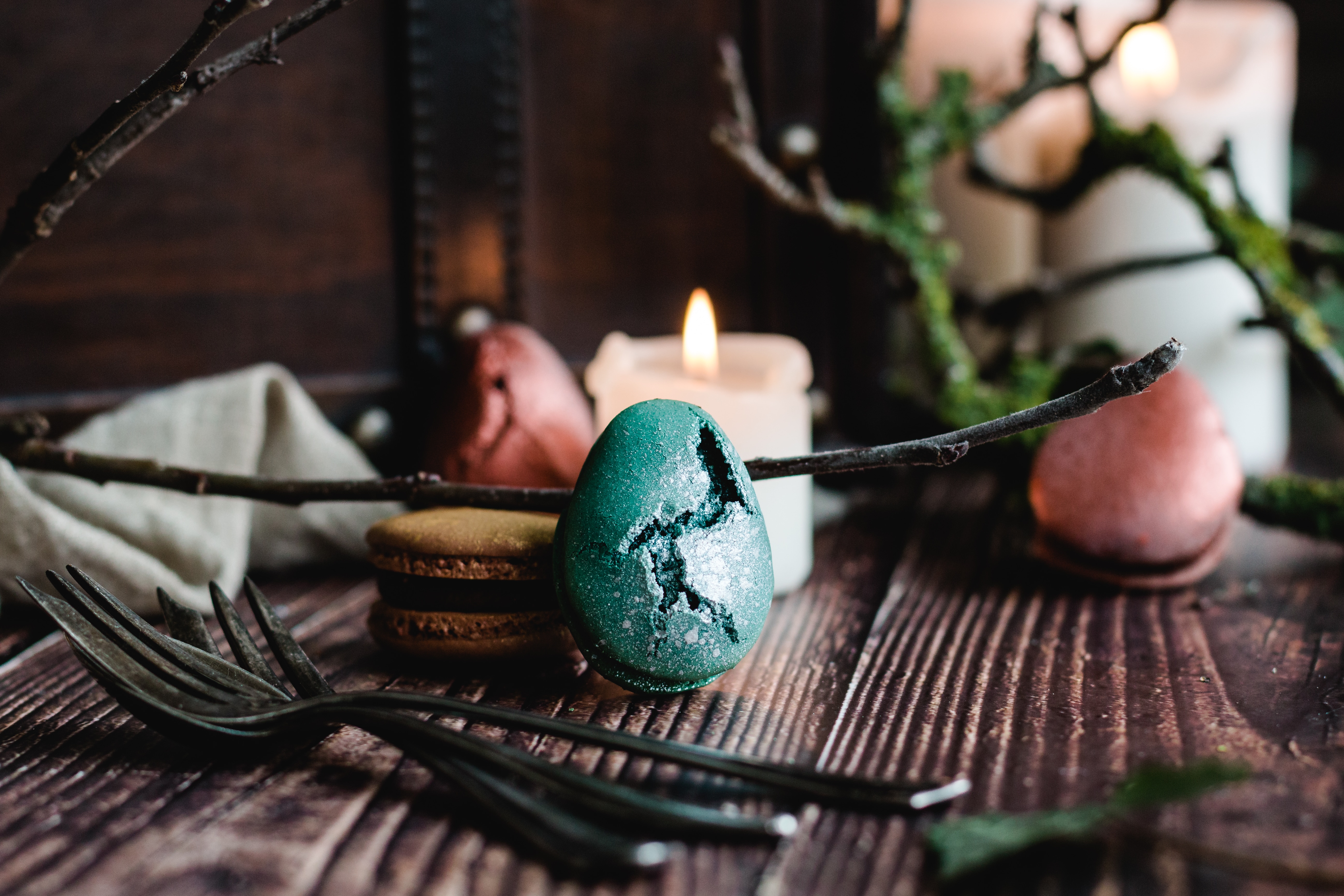 Now the macarons have to rest first. Now is the perfect opportunity to make the ganache. Over the next 30 minutes to 2 hours, a thin skin should form on the surface of the macarons. This will later lift during baking, so that the feet appear on the underside of the macarons.

You can test if the macarons are ready by gently touching the surface with your finger. If no mass sticks to your finger and it feels dry, you are ready for the oven.

As a filling for the large and small "Dragon Egg Macarons", I decided on a chocolate ganache made from dark chocolate. This creates a wonderful contrast to the sweet almond meringue biscuits.

To do this, you finely chop the chocolate and put it in a heat-resistant bowl. Put the cream in a small saucepan and heat it until it is really hot. Then pour it over the chopped chocolate and let it melt for a moment. Then stir until it becomes a smooth mass.

Set the ganache aside at room temperature. As it cools, it slowly solidifies. Before you put them in a piping bag with a round perforated nozzle, you should open them briefly again. This makes the chocolate ganache airier.

The dragon eggs come into the fire

Before the macaron shells are baked, you should open your oven 160 ° C top / bottom heat preheat. Then slide the trays in for about 12 to 14 minutes. I usually turn the trays of my macarons once after half of the baking time. So they bake more evenly with me.

After baking, carefully pull the finished macarons from the baking sheet onto your work surface. But first let them cool down for about 10 minutes. Then carefully slide a card of dough under the feet and the macarons should come off easily.

Before you put the dragon egg macarons together, you should fold them up in pairs. Put the whipped ganache in a piping bag and put a nice dab of cream on the bottom half of each macaron pair. Carefully close it with the second shell, applying gentle pressure.

For a particularly impressive dragon and egg look, the macarons have to be decorated last. I used simple sugar fonts in 3 different colors. I used these to draw dragon scale patterns on the tops.

Finally, I sprayed the macarons with some edible metallic spray in silver, gold and copper. That gave them even more depth and mystique. You can of course leave it out. By the way, I only decorated the little dragon eggs with the spray.

How do you like my dragon egg macarons? Would they also be something for your Game of Thrones themed party?

Do it yourself bingeworthy!
Your Madame Dessert