What are innovations in power generation

Innovative Ways to Power Homes Made in Japan

In Japan, innovative technologies are increasingly being developed for houses that produce exactly as much electricity as they consume (so-called “zero energy houses”). In the meantime, there are already entire settlements that deliver even more energy than they consume themselves (“plus energy houses”). Japanese companies, leading in the field of green technologies, are currently looking for ways to significantly reduce electricity consumption for lighting, heating and cooling homes. They use natural energy sources such as solar energy to produce all the electricity a household needs. In this way, the consumption of conventionally generated energy should be significantly reduced and a change to natural energy sources should be achieved. The aim is to establish a lifestyle based on self-sufficiency, whereby the ability to store and feed electricity into the general electricity network is an essential part of the energy supply. 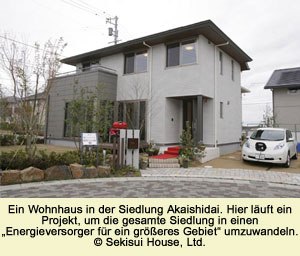 Akaishidai is a new housing development in Tomoya City, Miyagi Prefecture. It is located in the Tohoku region in northeastern Japan, which was hit by the severe earthquake in March last year. In the construction of the houses in this settlement, technologies were used that enable the production of electricity at home using a combination of fuel cells and solar energy. As a result, more electricity is actually produced in the settlement than it consumes itself. The surplus is then fed into the regional power grid to be consumed elsewhere.

It is estimated that this housing estate will soon be able to produce 2508 MWh per year. That is 70% more electricity than the settlement with its 2650 inhabitants actually consumes. Since the surplus of over 1000 MWh supplies settlements in the neighborhood, Akaishidai functions as a virtual power plant.

Akaishidai is just one of many settlements that can now be found all over Japan, where construction companies have started to offer owners houses that do not require external electricity and are even able to sell excess electricity to regional energy companies. 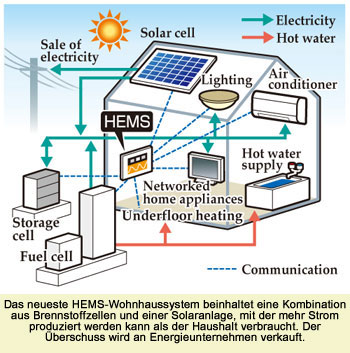 Ene-Farm: Innovative fuel cells made in Japan for use in houses 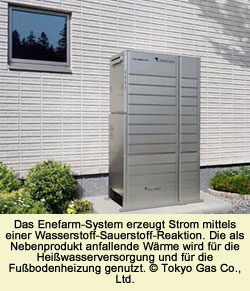 In Akaishidai and many other areas of Japan, a system known as "Ene-Farm" is used to generate electricity for residential buildings, which produces gas as well as electricity. In 2008, Japan became the first country in the world to introduce such a system. Ene-Farm consists of a fuel cell unit and a storage unit for hot water. The system was developed by gas companies from Tokyo and Osaka with the participation of manufacturers of household appliances.

The fuel cell unit produces electricity by reacting hydrogen - generated by a steam conversion process with natural gas, liquefied gas or kerosene - chemically with oxygen from the atmosphere. The fuel cell is able to generate between 750-1000 W. This electricity, after being converted into alternating current by an energy converter, can be used anywhere in the house. In addition, a device for heat recovery - the heat exchanger - ensures that the heat generated as a by-product is used efficiently, for example to heat water for consumption in the kitchen and bathroom to around 60 degrees Celsius. This hot water is also used to operate the underfloor heating by means of pipes. 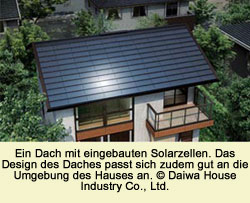 It is said that Ene-Farm has increased the efficiency in the use of energy - i.e. the proportion of energy that is actually used - up to 81%. This means a considerable improvement compared to the 37% that can be achieved with conventional energy generation or with electricity from the power grid, since a lot of energy is lost there when it is passed through the grid or in the form of waste heat. A single Ene-Farm unit is able to generate 40-60% of the electricity a household needs.

Production, storage and management of energy at home by HEMS

In the 1970s, Japanese electrical companies were the first in the world to manufacture devices that run on solar energy, an important natural source of energy. Today, some forty years later, Japanese housing companies are introducing a variety of new products, such as roofs with built-in solar cells, to harness this free and abundant source of energy. These companies use solar cells with a conversion rate of up to 18.6%, with the average being around 16%. This makes Japan a world leader in solar cells for the commercial market.

Japanese companies have also worked hard for many years to improve storage battery technology. One company offers a large storage battery with a capacity of 8.96 kWh, which can be used to supply a house with electricity for a whole night in the event of a power failure. In addition, a device was developed with which electricity from the batteries of electric cars can be fed into the house.

Another product developed by companies in Japan is the Home Energy Management System (HEMS), which can be used to monitor and regulate all systems in the house. The HEMS is controlled by a computer and can display the data on energy consumption and household storage on a PC monitor, but also on a mobile phone display. The HEMS also controls power consumption, thereby maximizing energy efficiency and saving electricity. The display of data on energy consumption also encourages homeowners to save energy and in this way also contributes to the synergy effect in terms of efficiency and energy savings. 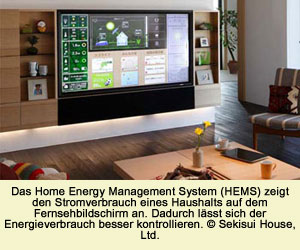 The commitment to reducing the electricity bill for the hot water supply and air conditioning not only reduces costs, but also greenhouse gas emissions, thereby helping to protect the environment.

A number of housing companies are already saving energy during the construction phase by using the process for building with prefabricated components. As early as 1958, the development of a building system with prefabricated components in the form of a "tube house" began in Japan. Today more than 60% of all roofs, walls, windows and other components for house construction are prefabricated in factories and then transported to the construction sites. The prefabricated houses can then be easily assembled on site and at the same time have a high production level, as is customary in the factory. This is particularly important in terms of highly efficient insulation to keep the house warm in winter and cool in summer with air conditioning.

With the help of further improvements in construction technology, some houses are able to maintain the same room temperature in both summer and winter. This is achieved, for example, by installing double or even triple-glazed windows and by using a patented photo-catalytic material for the outer walls, which breaks down nitrogen oxide and insulates ultraviolet rays, thus helping to maintain a constant room temperature. A house with photocatalytically treated exterior walls reduces carbon dioxide emissions by an amount equal to the amount of CO2 absorbed by fourteen poplars together.

In addition, there is a unique method of temperature control that is currently being developed. From Japanese houses, which usually do not have a basement, we know that there is a stable temperature of about 15 degrees Celsius under their floor - measured about 10 cm above the ground. A method is now being developed that takes advantage of this feature to maintain a constant room temperature in Japanese homes. A kind of reverse ventilation system is also used. While conventional ventilation draws the outside air into the house, a Japanese company has developed a new type of ventilation system that increases the pressure inside the house and thus forces the air in the rooms to flow outside. The resulting pressure difference is then used to draw the air into the house under the floor of the house. This air is cool in summer and warm in winter.

Japanese housing companies are constantly innovating to make houses even more energy efficient and environmentally friendly, while at the same time being as comfortable as conventional houses - or even more comfortable. 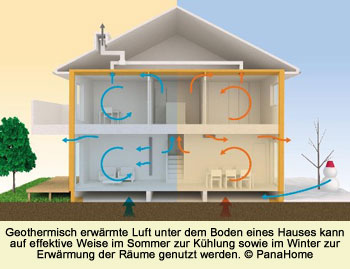