What is the OSI reference model 1

In data networks and especially on the Internet, many different network types are connected to different devices, operating systems and user programs from various manufacturers. In these open systems, joint communication is only possible if there are fixed agreements that are binding for all participants in the network. The agreements are called protocols.

In order to keep the joint network system expandable, it is divided into individual levels. In each of these shifts, only one precisely defined task area is processed and the result is passed on to the next shift. It is a hierarchical system. As long as the transfer functions are recognized and adhered to, the working method within a shift can be adapted and improved at any time without the user noticing anything.

In 1983 the International Organization for Standardization, ISO, published a basic communication model. It is the OSI reference model, open system interconnection, which is divided into seven layers and is referred to as the OSI layer model. The lower four layers are called transport-oriented layers, the following three layers are called user-oriented layers. Each layer provides defined transfer functions that enable regulated data traffic. Since each end system in the network processes the layer model in the same order, the same layers seem to be horizontally connected. The data transport actually runs vertically and only horizontally in the physical transmission medium such as cable, fiber optic or radio of the network. 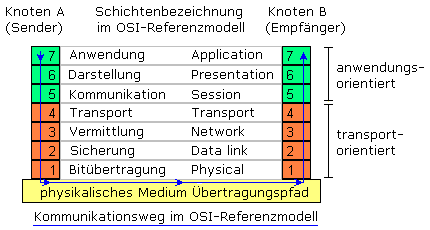 The data exchange in the network can take place like a conventional telephone call through line switching. A fixed connection is established between two network nodes that cannot be used by any other network node as long as the data is exchanged and the connection is not disconnected. In computer networks and the Internet, line switching is neither efficient nor economical.

The IT networks use packet switching in which many participants, controlled one after the other, send many smaller data packets to their destination addresses. The packets can reach the destination via different switching nodes, are recognized there and put together in the correct order to form the original data sequence. This means that the data network can be used by many participants at the same time. The protocols required for control in the individual layers are more complex.

Duties of the shifts

The top level is the interface for the user and the application programs with which he wants to access and communicate with the network. It can therefore also be referred to as a processing layer. The application layer includes functions and utilities such as data transfer, e-mail, remote maintenance, and database management. The application-oriented basic services with the corresponding data structures and protocols are provided here. Well-known protocols are: HTTP, SSH, FTP, SMTP, POP3 and Telnet. A hardware component is the gateway, which works with all other layers as a protocol converter. It can change or remove existing protocols and add new ones.

The presentation layer provides functions for recurring tasks. This includes data conversion into a standardized display and coding language such as ASCII, JPEG, HTML, Unicode / UTF-8, ANS.1, compression and data encryption as well as display on the screen. As a data provision level, layer 6 ensures that the data from the application layer of different networked systems can be meaningfully evaluated by the user.

A session is a logical connection in the session layer of a protocol stack. The tasks of layer 5 include synchronization and the allocation of access rights between network nodes. This area includes the password query and the setting of fixed points in the data stream. With their help, a disrupted data connection can be re-synchronized from this point on.

For the layers 5 to 7 above, the transport layer provides uniform access and can be seen as a logical end-to-end connection between users. The actual data transport, which is negotiated by the following layers, remains hidden from the higher, application-oriented levels and is referred to as transparent.

The transport layer is responsible for data segmentation, in which larger amounts of data are divided into smaller packets and provided with protocol information. The layer enables computers to communicate with different speeds by means of flow control, can prevent data jams and, after receiving data, arrange the segments in the correct order. Other tasks are error detection and troubleshooting. The more well-known Internet protocols of the transport layer are TCP, UDP and SCTP.

The task of the network layer is to transmit the data packets and select suitable connection paths. The data packets of layer 4 receive route information for routing written in a header or data header. The data packet expanded in this way is called a datagram.

The routing and sequence of the many datagrams in the network are independent of one another and are organized by routing tables within the network layer. There are both static and dynamic routing methods. The latter ensure optimal network utilization. Datagrams from whose header a forwarding can be read do not reach layer 4. They are sent to the next connection node with a new header.

On the network layer, routers and layer 3 (multilayer) switches work as well-known hardware components. Some of the supported protocols are: IP, ICMP, ARP and X.25, an externally circuit-switched but internally packet-switched method of large telephone companies. At the German Telecom it is known under the name Datex-P.

The link layer groups the data bits to be transmitted into data frames or frames. The source, destination and MAC addresses are entered in a preceding header. The end of the frame, the trailer, receives control and checksum fields. Layer 2 thus ensures secure transmission channels and can detect layer 1 transmission errors. Defective frames are requested again. There is a data flow control and an acknowledgment procedure with which the transmission speed is controlled and the network is protected against overload.

According to the IEEE 802 standards, layer 2 is divided into the two sub-levels LLC and MAC. Bridge and switch are among the hardware components of the data link layer. The CSMA / CD access control takes place here in the Ethernet protocol. The security layer also includes the standards and protocols for token passing and FDDI.

As the lowest level, the bit transmission layer is responsible for the forwarding or transmission of the serial bit sequences. In addition to the transmission processes at the signal level, layer 1 also includes the hardware components that enable the signal to flow to or from the actual physical transmission medium. The cabling itself, copper-based or optical, is not one of them. Important tasks of layer 1 are: