What does COPD do?

Effects of COPD on everyday life, psyche and quality of life

How COPD can affect the psyche and quality of life will be discussed by Prof. Dr. Nikola Stenzel from the Psychological University Berlin in her lecture at the 9th Symposium Lung on September 10, 2016. 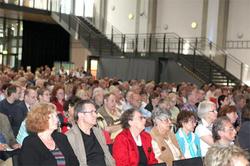 A large number of patients with chronic obstructive pulmonary disease (COPD) also experience psychological impairments. The full picture of a depression or anxiety disorder is not always present, but many patients suffer from individual symptoms of depression or anxiety. According to a large study, approx. 40% of COPD patients show an increased level of depression, approx. 36% suffer from increased anxiety. Several studies have shown that the extent of anxiety and depression does not necessarily depend on the severity of the COPD disease. For example, in a recent study, anxiety in COPD patients in stages I and II was just as common as in stages III and IV. Depressive syndromes were also reported just as frequently in the early stages as in higher grades (III and IV). It is possible that for most of those affected an assessment of the disease takes place at an early stage (for example after the diagnosis has been communicated), which subsequently no longer changes significantly.
Against the background of the real threat posed by the illness, “illness-related fears” often arise. This means the fears and worries of those affected about the symptoms themselves or about their consequences for the future. As part of a study by Prof. Dr. Nikola Stenzel and her colleagues in cooperation with the SHG Lungenemphysema – COPD Germany, the disease-specific fears of the study participants with COPD can be summarized as follows:

Affected people who lived in a partnership also reported worries about burdening their partner too much with the disease. The use of long-term oxygen was also associated with fears for some participants: some of those affected reported worries about being judged negatively because of the oxygen device or of shame about using it in public. Some participants even stated that they generally avoid using an oxygen device in public.

Specific worries and fears that are directly related to the symptoms of COPD and its consequences are, given the severity of the disease, to be seen as an obvious and “normal” reaction. However, if the worries and fears with regard to the disease are very pronounced, they can themselves become a burden and further impair the quality of life of those affected. For example, fear of breathlessness can lead people to avoid physical activity. As a result, those affected withdraw more and more from everyday life, which in turn can lead to further impairments.

Practitioners (e.g. doctors, physiotherapists) should also pay attention to possible psychological impairments in those affected who are still in the early stages of the disease, in order to be able to cautiously enter into communication and thus counteract the chronification of fears. Research shows that many sufferers shy away from speaking to their doctor themselves. However, practitioners can be important contacts to put fears into perspective or to inform those affected about ways in which their general well-being can be positively influenced.

Those affected should try to actively seek support if they notice that worries and fears are rampant. A self-help group can also be helpful to discuss the disease and its consequences. Self-help groups also often provide newsletters and guides that provide practical and up-to-date information on the disease.

In addition, family members and partners can also make an important contribution. However, relatives often first have to learn how they can best support the patient. Open communication between those affected and their relatives is important for this. The relatives, in turn, should make sure that care for the sick person is not just on them, but that they are also open to doctors and nurses and share responsibility with them.

On the subject of COPD and psyche, COPD-Germany eV, in cooperation with the patient organization Lung emphysema-COPD Germany, has published a patient guide entitled: "COPD: Effects on everyday life, psyche and quality of life ... not only at an advanced stage", which you can find in the exhibition tent 3 at booth 1 free of charge.

All information about the event can be found here: Symposium Lunge 2016
You can also order a free program booklet.