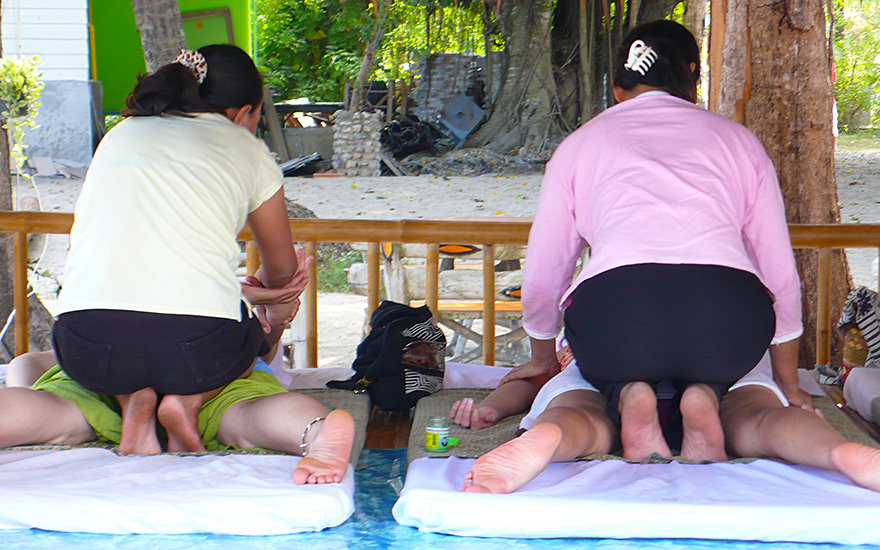 Massage studios in Thailand are like tailor shops and branches of the supermarket chain "7-Eleven": You can find them on every corner. What is barely affordable in European countries costs only a few euros in Thailand. The price for an hour in Thai -Massage averages 200 to 350 baht (5 to 8.70 euros). We are talking about traditional Thai massage, oil massage and foot massage. All three types of massage have a positive effect on health and increase physical and mental well-being For most tourists in Thailand, massages are just as much a part of their vacation as swimming and sunbathing.

In southern Thailand you will not only find shops and salons offering massages, but also plenty of outdoor massage tables on the beaches. These are mostly simple mats on raised bamboo frames, which are sometimes provided with curtains (see photo below). In the following, the three most important forms of massage - the traditional Thai massage, the Thai oil massage and the Thai foot massage - are described.

The traditional Thai massage is a full body massage. It is used to heal illnesses and increase wellbeing. Massage is usually done on the floor, with the thumbs, ball of the hand, elbows, knees and feet. A variety of pressure strengths and massage grips are possible. Traditional Thai massages should last at least one to one and a half hours. Stretch exercises derived from yoga are part of the massage. The body is stretched, tensions are released.

There are two forms of traditional Thai massage: the southern, somewhat harder massage style, as taught in the Wat Pho temple in Bangkok, and the more gentle northern style.

The traditional Thai massage or Nuad Bo-Rarn has its origins around 2500 years ago in India at the time of Gautama Buddha. His companion and doctor Dr. Jivaka developed a form of massage that could be practiced at any time and in any place without aids and that should serve to maintain health. Such massages were first used by the Buddhist wandering monks. Dr. Jivaka is still revered today as the founder of traditional Thai massage.

Through a cultural and religious exchange with Ceylon (today Sri Lanka), Thai massage came to the then Kingdom of Sukhothai in what is now Thailand in the 13th century. During the invasion of Burmese troops in 1767, most of the written evidence of traditional Thai massage was destroyed. In 1788, King Rama I had copies and remaining fragments carved as engravings on the walls of the temple Wat Phra Chetuphon (also called Wat Pho) in Bangkok. In this way the knowledge of Thai massage was passed on. King Rama III. founded the first public university in Wat Pho in 1832. Medicine and massage are still taught today in the extensive temple complex in Bangkok. 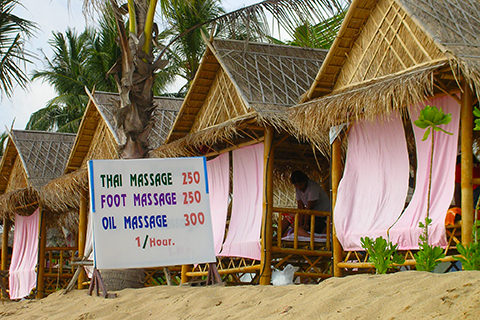 As with the traditional Thai massage, the Thai oil massage is also a full body treatment. The oil is gently massaged into the skin. Light pressure is applied in places with hands or fingers. Stretching and pressure methods of classic Thai massage are also used in Thai oil massage.

In contrast to the traditional Thai massage, essential oils of different scents are used in the oil massage. The massage has a nourishing effect on the skin, has a calming effect on the nervous system and stimulates the circulation.

The Thai foot massage has its origins in reflexology. But unlike the classic foot reflex zone massage, the masseurs use special massage sticks in addition to their hands. This allows increased pressure to be exerted on the reflex points.

The foot massage originally comes from China, where it has been used for more than 3000 years. The foot massage is said to have a preventive effect and alleviate ailments such as migraines or asthma. The explanation for this is that sensory nerves for the internal organs run through the entire body and mostly end in the feet. Each internal organ is assigned a specific zone, on which pressure is exerted selectively during the massage.

The prices for an hour massage in Thailand are on average between 200 and 350 baht (5 to 8.70 euros). Many Europeans find Thai massages painful at times. Because there is often a lot of work to do. As explained above, the "hardness" of the massage depends on the training of the masseur. The southern massage style is harder, the northern more gentle. A little tip: If it hurts, make it understandable that you want to be massaged less violently. 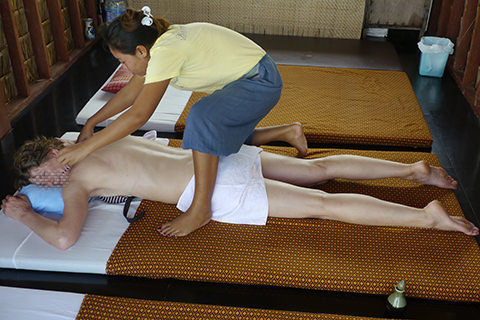 Thai massage in a beach hut

"Massage", "Thai Massage, Madame". "Good Massage," insists the voice from a distance. A middle-aged woman waves to me from her little "massage parlor". The booth is actually just a covered platform made of bamboo, on which two foam pads wait for customers. Neatly covered with cloths, next to it a blue plastic bowl for washing your feet beforehand.

As on all larger and built-up beaches in Thailand, there are massages every few hundred meters on Koh Phangan's beaches. A pleasure for tourists - at least as far as the softer gaits such as oil and aroma massages are concerned - a sometimes worthwhile business for the Thais. When the shop is up and running.

Like almost every day of my vacation, I allow myself to be persuaded to have a massage today. So climb the four wooden steps to the platform and then hold my sandy feet in the plastic bowl with water. My masseuse gives me a card with a price overview and lets me choose. I choose traditional Thai massage. Not because at 250 to 300 baht (approx. 6.20 to 7.50 euros) it is usually the cheapest form of massage in Thailand, but because I promise myself good things for my back, among other things. We'll see.

First, I follow the instructions of my masseuse, lie on my stomach on the foam pad and my arms against the body. Here we go. The first few handles on my calf make tears well up in my eyes. I clench my teeth and hold out. My masseuse does a great job - and full of physical effort on top of that. Because the traditional Thai massage is not only massaged with the hands, but also with the knees, elbows and feet. There are also some uncomfortable stretching and stretching exercises.

Further up on the back and arms, the massage is no longer as painful, and sometimes even beneficial. Until my masseuse stretches me again and hits my body with her knees and elbows. After an hour, the "fun" is over. Finally, my masseuse drummed my back vigorously with her fists ... and you can rest assured: I'll be back. Because despite all the pain: The traditional Thai massage has done it perfectly.