What is your rating of the Japanese language

Worldwide, in recent years, the number of people who have chosen to learn the Japanese language because of the boom in Made in Japan pop culture such as anime and manga has increased. Japan itself supports the various institutions that are committed to learning the Japanese language abroad.

“I want to see Doraemon without subtitles!” Or “I want to read my favorite manga series in the original!” - the motives for people abroad to start learning Japanese have so far been mainly practical considerations, such as wanting one Study visit or employment in Japan. In recent years, however, more and more people have been learning Japanese because they are fascinated by Japanese pop culture, be it manga or anime, computer games, pop music or fashion from Japan. A special feature is that this new “Japanese fever” does not so much affect adults as it does younger people, whose interest in the Japanese language leads them to Japan itself. 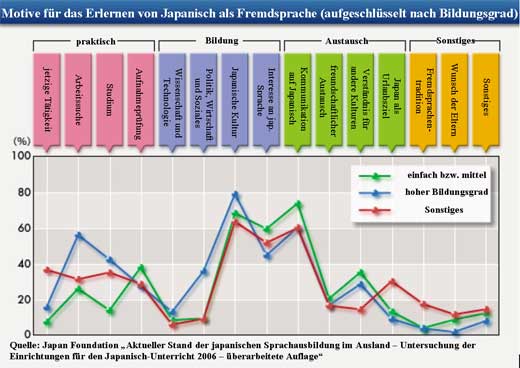 How many people around the world are actually learning Japanese as a foreign language? According to a study by the Japan Foundation's overseas Japanese teaching institutions, the increasing number of Japanese learners from year to year also reflects the growing interest in Japan. In 2006, around 3 million people in 133 countries or regions learned the Japanese language. Compared to the time when this research was first conducted (1976), the corresponding institutions recorded a twelve-fold increase (13,639 institutions), while the number of teachers of Japanese is now about eleven times (44,321 people) higher than then. There are particularly many Japanese learners in South Korea, China and Australia. The “Japan Language Proficiency Test” took place in a total of 173 cities in 52 countries in 2008. A total of around 560,000 people took this exam abroad and in Japan itself. As the number of learners continues to grow, the exam will even take place twice a year from 2009 onwards at selected locations. 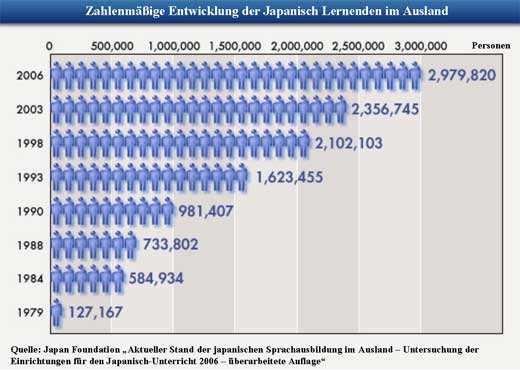 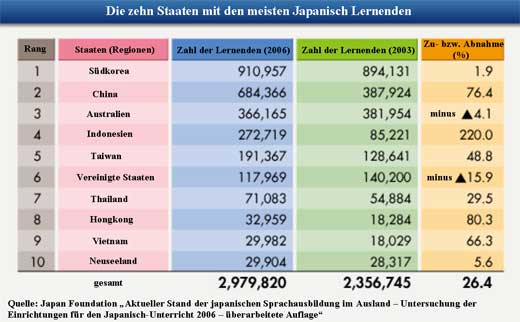 Depending on the country, it can be difficult for those interested in finding suitable teaching materials for Japanese. For example, there are no textbooks for Japanese in the language of the country or the educational institutions are not keeping up with the growing number of language students. The above-mentioned study of Japanese language training abroad by the Japan Foundation cites problems relating to Japanese teaching, among others: "Lack of suitable teaching materials" (40.4%), "inadequate facilities and equipment" (30.2%) ), “A lack of information about teaching materials and teaching methods” (26.5%) or a “lack of teachers” (19%). The solution of these problems is an urgent task for the further promotion of foreign cultural policy through the spread of Japanese language education.

Support for Japanese language training through the Japan Foundation

In view of the tasks just outlined, the Japan Foundation is committed to supporting Japanese language training in a wide variety of ways. For example, teaching materials are being broadcast on television (the series “Erin's Challege! I can speak Japanese” is broadcast on television in over ten countries) or for distribution via the Internet (e.g. the website “teaching materials for everyone”, the know-how and materials for the creation of teaching material), sent experts in Japanese language training (Japanese native speakers) abroad, trained foreign Japanese teachers and experts in Japan, and promoted the creation of the Japan Foundation Japanese Network (Sakura Network). The latter is to link more than 100 institutions worldwide with one another by 2010.

Promotion of communication in Japanese across national borders, ethnic groups and cultures

Communication in the Japanese language includes not only communication between Japanese and foreigners, but also communication between language learners from different countries whose mother tongue is not Japanese. This has given rise to reflections on the concept of “Japanese Language for Mutual Understanding”, which aims to promote communication across national borders, ethnic groups and cultures. This concept gives language learners the opportunity to come into contact with several languages ​​and cultures. This in turn opens the space for new perspectives and thus also enriches the personal life of the language learners. The Japan Foundation has developed the “Japan Foundation Standards for Japanese Language Education” for the concept “Japanese language for mutual understanding”. The “Common European Targets for Languages”, with the help of which language training in Europe is laid down, served as a template for this. In Europe, since the beginning of integration around 30 years ago, with a view to the transfer of people in the context of studies and employment within the region, framework conditions for learning, training and assessing the numerous languages ​​spoken in Europe have been developed and used.

Volunteers convey the attractiveness of the Japanese language

In addition to Japanese language training through the Japan Foundation, to capitalize on the global popularity of popular culture Made in Japan, there is a Japanese culture dissemination program in which volunteers from Japan teach their mother tongue while showcasing their country's culture. This program exists in the four Central and Eastern European countries of Hungary, Poland, Bulgaria and Romania, where Japan Overseas Cooperation Volunteers (JOCV) ceased when these countries joined the EU. Since January 2009, a total of 26 Japanese volunteers have been sent to these countries for two years each. While they are integrated into the local society, they convey the attractiveness of the Japanese language and culture on an equal footing with the local people.

Learning a language doesn't happen overnight; rather, it takes a certain amount of time before the first learning successes become visible. It is precisely for this reason that it is important today to continue to improve Japanese language training abroad with a view to the future. Language training for Japanese is required, which arouses interest in the Japanese language from childhood, promotes learning of Japanese over the years and uses pop culture, for example in the form of anime and manga. Learning the Japanese language is the first step in getting to know the "heart" of Japan. Japan will continue to work to ensure that people all over the world learn Japanese with the time and thoroughness required.

Note: This article was published on August 19, 2009 as the 43rd episode of the information series “Understanding the international situation!” On the website of the Ministry of Foreign Affairs of Japan and has been editorially revised for news from Japan and translated into German.

And how is the situation of learning Japanese in Germany? According to figures from the Japan Foundation, there are currently around 12,000 people in this country learning the Japanese language. The facilities range from language courses at adult education centers to Japanese courses at grammar schools and Japanese studies at university. According to the Japan Foundation, more than 1,000 people in Germany took the Japanese Language Proficiency Test in 2007.

In view of this great interest in the Japanese language, the Embassy of Japan is also committed to the further spread of Japanese. For example, the embassy takes part in the international trade fair for languages ​​and cultures, Expolingua Berlin, which takes place in Berlin from November 20-22. The embassy will be represented there with its own stand and will also provide information on exchange opportunities, among other things. On November 22nd at 12.30 pm there will be a short introduction to the Japanese language, in which one can get a very first overview of this language. Maybe you have the time and interest to stop by. We would be very happy.