How is acetone made

Special notes for the school
Acetone is a highly flammable liquid that can form explosive mixtures with air. The vapors must not be inhaled. Acetone must not - as is unfortunately often the case - be kept open in wash bottles to loosen adhesive residues. They are always stored in a fire-proof safety cabinet with ongoing air exhaust in a tightly closed glass bottle. When working, protective gloves made of neoprene or butyl rubber must be worn if there is a risk of major skin contamination.

properties
Effect on the human body

The aromatic-smelling liquid can cause reddish inflammation on the skin, the vapors irritate the bronchi and eyes, they cause headaches and tiredness. In higher concentrations they have a narcotic effect. 75 milliliters are considered a lethal dose. Acetone occurs in traces in urine and blood. In diabetes there are increased concentrations in the urine. 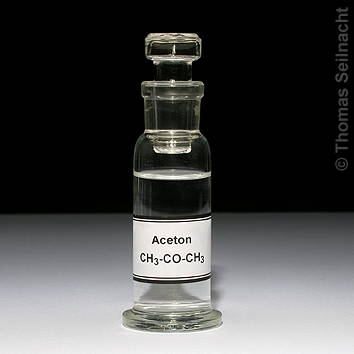 The ketone acetone dissolves well in alcohol, benzene, diethyl ether and chloroform, it is a good solvent for oils, fats, resins, cellulose and ethyne. With oxidizing agents such as hydrogen peroxide and the action of a catalyst such as hydrochloric acid, a trimeric peroxide can form, which is highly explosive. The H atoms of the acetone can easily be substituted by halogen atoms. With bromine, for example, 1,1,1-tribromoacetone (CH3-CO-CBr3), which is also known as "tear gas".

Manufacturing
In the past, acetone was made by dry distillation of calcium acetate or wood. The technical synthesis takes place today from isopropyl alcohol by a catalytic dehydrogenation on copper contact at 250 ° C. Two hydrogen atoms are split off from the isopropyl alcohol:

Other important processes are the Wacker-Hoechst process, in which propene is oxidized by oxygen in the presence of an aqueous solution of palladium and copper chloride at 110 to 120 ° C and 10 to 14 bar. The synthesis from cumene, which can be prepared from benzene and propene, is also of importance. When oxidizing with oxygen, cumene initially forms cumene hydroperoxide, which then breaks down into phenol and acetone under the influence of strong acids.

use
Acetone is used in the paint and adhesive industry as a universal solvent and extraction agent for cellulose, vinyl resins, chlorinated rubber, celluloid, ethene, but also for essential oils, chlorophyll and resins. It is used as a paint remover for oil and lacquer paints or as an intermediate product in the production of other organic chemicals such as bromoacetone (tear gas), chloroform or diacetone alcohol. It is used as a solvent in the manufacture of gun cotton or for the synthesis of the explosive acetone peroxide (TATP), which, despite its extremely unsafe handling, has often been used in terrorist attacks, for example in London in the summer of 2005.


Further information
Ketones as a group of substances in organic chemistry
<?