Is it effective to pray to God?

Can you pray wrongly? What can keep us from real prayer to God 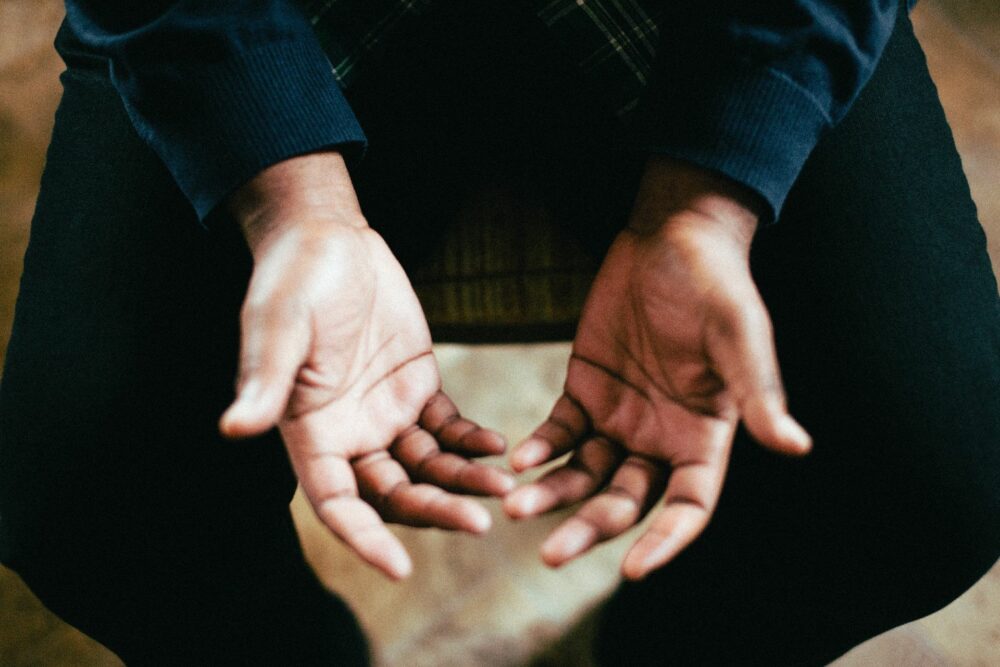 Prayer is an essential part of Christian life. It is communication with God - the Creator of the world and the Lord of the universe. Basically, it always starts from God. If he does not agree to listen or speak, then no one can force a conversation with him.

Prayer is an encounter between unequal partners. In any case, God is infinitely superior to man in terms of insight, power, experience, patience, perseverance, etc. According to the statements of the Bible, prayer is very desirable (Eph 6:18; Phil 4: 6), but not in everyone Form and in any case.

Although the widespread lack of prayer in Christian circles is a not inconsiderable problem, in the following I want to concentrate on misunderstandings of those who pray. It should not be forgotten that prayer is absolutely essential for a lively spiritual life!

Most abuses of prayer stem from either a magical understanding of one's relationship with God or a premature mistake of prayer for human communication. For some, prayer is like a tool or a law of nature that one can freely use for one's own purposes. Others transfer their experiences from interpersonal relationships unfiltered to God and believe that they can impress them with flattery, long explanations or big promises.

The power of the magic word

Anyone who brings up their concerns with friendly words, with a smiling face or simply with a "please" in everyday life is often far more successful than someone who just pounds around. Many people transfer this earthly experience directly to a conversation with God and believe that the correct formulation determines whether their prayer is answered.

Some people therefore enrich their prayers with many "Hallelujah", "Hosanna", "Lord" or similar holy terms, in the hope that God will be impressed by them and will respond more to their own requests (Mt 7: 21ff.). Often this prayer language differs fundamentally from the normal use of words by the prayer in everyday life. Such words quickly become empty phrases and are no longer an expression of real amazement in the presence of God. Perhaps one thinks that such formulations are also in line with the Creator's linguistic usage, because one might be confusing it with an ancient Lutheran German.

Others think that if they close their prayer with a strong “Amen” or “In the name of Jesus”, they would be more likely to be heard or answered by God (Lk 21.8; John 14.13f .; 20.31). The danger of misunderstanding these “holy” words as magical spells is then no longer far. To pray in the name of Jesus means to ask in accordance with his meaning, in accordance with his will. In no way is it a formula with which God surrenders himself to the will of the respective person (Jn 15: 7).

God obviously doesn't care so much about the formulation or the correct “magic word”. All of this arises from a more human conception of God, who in truth pays much more attention to the human heart than to his external appearance (1 Sam 16: 7; Ps 147: 10f.). God knows more than anyone how deceptive the speeches can be when people use the most beautiful words to seek their own benefit or even to cause harm.

Some politicians and some rock stars are convinced that they are more likely to be believed when they gesticulate vigorously or shout out loud. This should signal strength and conviction or simply cover up the lack of strength of the arguments. Occasionally, tears at the right time are meant to show a speaker's compassion or a defendant's remorse.

Of course, those who have genuine feelings towards God do not need to hide them (Ezra 10.1; Lk 8.9-14). On the other hand, anyone who sobs or screams at almost every prayer should ask himself whether he is not only playing a role here, which is supposed to convey the fervor of one's own devotion to the listeners or to God. A loud or fierce prayer is not always a sure sign of genuine strength of faith or conviction. In some circles it is just part of good manners to cry a little while praying intensely or to raise one's voice in imploring voice. Hopefully nobody thinks that they can intimidate or impress God with such expressions of mood, it is better not to do so if the feelings do not really come from the depths of the heart.

With God, “who looks at the heart” (1Sam 16,7), such an acted or artificially stimulated emotional outburst does not go down well. It could even be that such sobbing or screaming anger God because in his holiness and omniscience he does not really take him seriously (Lk 16:15).

What applies to crying and volume can of course also be transferred to the programmed whispering or moaning or the ecstatic gaze directed skywards. Some people also try to create a somehow pious, devout feeling in their stomach and head when they pray because they mistake it for fervor or the closeness of God.

Fortunately, God has promised his presence to everyone who is seriously looking for him, regardless of the inner gut feeling or the volume of the speaker (Lk 18: 9-14).

That is why it is completely unnecessary to create a pleasant prayer atmosphere through a long time of praise and worship before calling your concerns to God.

In the presence of God

It is also sometimes claimed that God's presence (and therefore His special attention) can be brought about through extended praise or speaking in tongues. Quite parallel to these ideas, there are sacred trees, temples, stones, graves, chants, etc. in other religions, in which God's presence should be experienced in a special way. Such concepts do not conform to the teachings of the New Testament. Christians can rejoice that God is present everywhere, that they can be sure at any place and at any time that God is very close to them and can also be addressed there personally (1 Timothy 2.8), regardless of the atmosphere created by candles, incense sticks, images of saints or stimulating music (Mt 18: 19f .; 28:20).

In the different situations of everyday life there is much that the Christian can say to God. You can let him share in joy and sorrow, in a detailed meeting, on a hike, or with a few short sentences during a class test or a near-accident.

Faith does not mean imagination

Many Christians adopt the idea of ​​the magical power of their own thoughts from the concept of “positive thinking”. If you only think about something intensely enough or wish for it, then that is how it would happen, they say. Some Christians base this assumption on the biblical statement of Jesus: "Your faith has made you well" (Mt 9:22). And James warns that the doubter cannot count on being heard by God (Jas 1: 6-8). Occasionally, God is given detailed suggestions for the fulfillment of one's own wishes in prayer, or one thanks God for something that God has not yet done.

The “visualization” method, which is also used by esotericists, is about imagining what is desired as precisely and intensively as possible, because it makes it reality. Such forms of spirit magic are not recommended in the Bible. "Proclamation" is the name given to the technique of bringing God under pressure through intensive thanks. Those who are firmly convinced of the fulfillment of their prayer also get what they want. The thanks expressed to God are, according to the declaration, a sign of strong faith. God could not resist this absolutely certain belief and fulfill the wish expressed immediately. It is of course a deception on the part of the audience to give the impression of an unequivocal answer to prayer, although nothing has happened so far in reality. Such a prayer to God is hypocritical because one gives thanks for something that one knows for sure that one has not received.

The whole thing has little to do with biblical faith; rather with the idea of ​​being able to urge God to act through magical formulas and spiritual imagination.

The Greek word for faith actually means something like trust (Jn 3:16; Heb 11:11). This trust in God is expressed in the fact that a person turns to God with his concerns and firmly believes that he will react appropriately (Mk 9: 23-25).

Those who are still ready to accept God's answer, even if they do not respond to their own wishes, have far greater faith than those who want to dictate to God with imagination how to act (Lk 22:42). Anyone who asks for a specific job, vacation or a certain apartment cannot be sure from the outset that these wishes also correspond to God's plan.

The fact that God does not give gifts to the doubter only refers in the letter of James to the requests that are made with certainty in accordance with the will of God (Jam 1: 5f.). If the Bible says that God wants to give every believer wisdom, patience, humility, etc., then one can confidently thank God at any time for the fulfillment of his request for these qualities (Gal 5:22).

Prayer is not pious magic

Prayer is not an emotional dumping ground, nor is it a method of generating meditative feelings, or a strategy for effective wish fulfillment or the evocation of God. Prayer is sometimes soulful, but often completely sober speaking to God, who listens attentively and compassionately when a person really honestly opens his soul.

Christians should much more often not see God as an unwilling negotiating partner who would have to be convinced by magic words, many arguments, their own sacrifices or violent formulations. According to his own statements, God is the loving Father for Christians who always has only the best in mind for them (Jer 29: 8, 11-13; Lk 11: 9-13). Often the problem is not the stressful situation itself or the lack of will of God, but the unwillingness to accept what has been experienced from the hands of God (Rom 8:28; 2 Cor 11:23 ff.). Far more often it is not the great faith that plunges into a prayer battle, but the refusal to accept God's plan. Somehow you think you know better what needs to be done than God himself, and then you try to convert him to your own view of things.

Of course, it is absolutely right to pray consistently, persistently, and in faith; especially when you can be pretty sure that your own wishes correspond to God's will. God wants Christians to rely on him completely and come to him with all their concerns, although he already knows them (Mt 6: 6f.).

Often there is still potential for improvement in the quality and scope of prayer in one's own life and in the community. Common prayer, fixed times of prayer, specific occasions, different forms and postures of prayer, given concerns, reading of the relevant Bible texts, changing places and times, short breaks, exchanging answers to prayer, the connection between prayer and other areas of life such as walking or having a motivating effect Singing, etc. Classical forms such as “praying and fasting” (Mt 9:15; Acts 14:23) also have their place in the life of the believer, as long as they do not mutate into a pious performance or an attempt to bribe God. Fasting means investing the time and effort that otherwise spends on eating into talking to God. He renounces something pleasant as a sign of gratitude to God, but without expecting something in return.

Those who are willing to invest time in prayer will be enriched in the process. He knows exactly to whom he owes protection, redemption and joy. In prayer his soul is relieved and internally built up, because he was able to put his worries and fears with God.

(The full article was first published under the heading “Prayer Myths - Why They Keep Us From Real Prayer to God” in “Bible and Church”, 1/2018; used with the kind permission of the author)