What is the refrigerant temperature in the cylinder

A basic distinction is made between air-cooled and water-cooled engines. Both methods, as well as the different coolant circuits and fan designs, are explained on the following pages. The standard system for commercial vehicles. Is the pump or forced circulation cooling. The flow through the cylinder block is mostly based on the cross-flow principle with diagonally arranged inlets and outlets.

Diagonal flow through the cylinder block 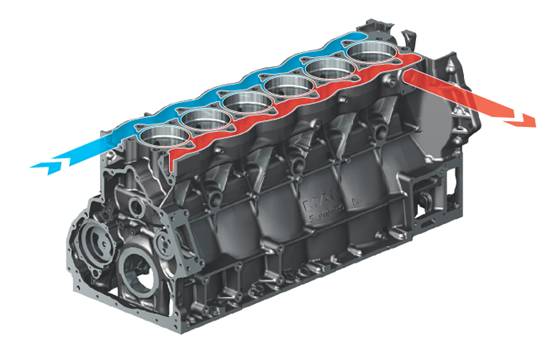 The heat in the oil and the engine components is absorbed by the overflowing media (water or air) and given off to the environment. For the cooling system to have a high cooling effect, it is important to optimize the heat transfer through the high flow rate of the coolant and maximum contact surfaces. The use of large-area light metal coolers promotes heat transfer and ensures that the entire cooling system is lightweight. Cooling means that between 25% and 30% of the fuel's possible usable energy is lost. It is dissipated into the environment in the form of heat.

1Higher performance at a lower 1Even

With air cooling, the heat to be dissipated is released from the engine parts directly to the surrounding air.

The advantages of air cooling compared to water cooling are:

But air cooling also has disadvantages:

1No noise reduction due to the lack of a water jacket

1High power requirement of the fan

In the case of fan air cooling, cooling air is sucked in by a powerful fan and pressed through channels to the cylinders encompassed by the baffles. The fan is often located directly on the crankshaft. However, it can also be driven with a V-belt, hydrostatically or via gear wheels. The amount of air supplied is regulated by the speed. The required speed is set automatically with the aid of a thermostat.

With the fan air cooling, sufficient cooling of cased motors is achieved. Fan-cooled engines are mainly used in cars with boxer engines (Porsche, Beetle). In commercial vehicles. They are rarely used. 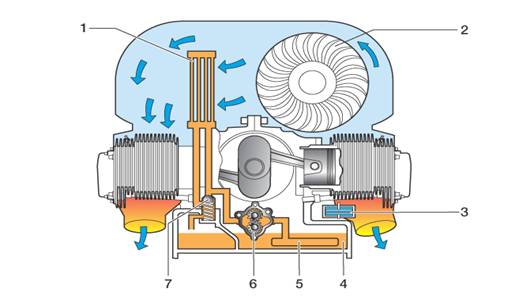 The simplest type of air cooling is used almost exclusively on motorcycles. In order to achieve the greatest possible effectiveness in heat exchange, the cylinder, cylinder head and often also the motor housing are provided with cooling fins.

In water-cooled engines, the cylinders and cylinder head are double-walled. There is water or coolant between the walls. The fan, cooler and water pump are the most important components of the water cooling system:

Advantages of water cooling are:

However, water cooling also has disadvantages:

Thermal circulation cooling (also known as thermosiphon cooling) uses the physical principle of the rising of warm liquids due to their lower density. The heated coolant rises in the cooling jacket and flows through the cylinder head to the radiator. colder water from the cooler flows in. Since no pump is used with thermal circulation cooling, the cooling water flow only occurs when the cooling system is completely filled. In addition, the flow rate of the water is slow, as a result of which the heat transfer is insufficient and uneven.

With forced circulation cooling, the coolant is circulated by a pump. Therefore, the flow rate of the coolant is high, which means that the excess heat can be quickly dissipated and thus a small temperature difference between the inlet and outlet temperature (5-7 ° C) can be achieved. Thermal stresses in the motor can be kept low. When the engine is cold, the pump transports the coolant in a small cooling circuit so that it does not pass through the radiator and the engine reaches its operating temperature as quickly as possible. When the engine is warm (approx. 85 ° C) the thermostat opens. The coolant then flows through the main circuit (large cooling circuit) and the excess heat is dissipated. 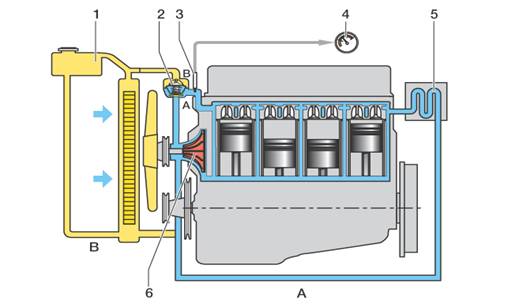 With the help of an expansion tank, the coolant level can be checked and, if necessary, the coolant topped up. It is provided with a vent and thus prevents damage to the lines if the coolant level is too high. The flow through the cylinder block and cylinder head is mostly based on the cross-flow principle with diagonally arranged inlets and outlets.

Fans or fans supply all of the engine parts to be cooled, and above all the radiator through which the coolant flows, with sufficient air. Switchable viscose fans (also called viscose fans) are often used in commercial vehicles. Such fans are very economical as they are only switched on when there is a need for cooling capacity.

The function of the viscous fan is based on the power transmission through the fluid in the viscous coupling. Viscous silicone oil is used as the transferring liquid. The fan is driven by a V-belt connected to the crankshaft or by gear wheels. The ratio of the fan drive is between 1: 1.1 and 1: 1.25.

If the viscous coupling fails, it is possible to establish a rigid connection between the drive pulley and the fan hub with the help of a screw or a bolt. The fan then runs constantly at maximum speed.

There is only a small amount of silicone in the working area of ​​the viscous coupling, so that the torque is transmitted from the drive pulley to the fan hub with a very large amount of slip. As the temperature rises, the curvature of the bimetal strip causes the valve to open through the switching pin. Silicone flows from the storage room into the work area. The more silicone that flows into the work area, the lower the slip between the hub and the drive pulley, the greater the power transmission and thus the greater the speed of the fan. There is a stepless increase in the speed and thus the cooling capacity.

When the temperature drops, the bimetal strip cools down and slowly closes the valve using the switch pin. The silicone flows back into the storage space via the pump body. The speed of the fan decreases.

Operating states of a viscous coupling 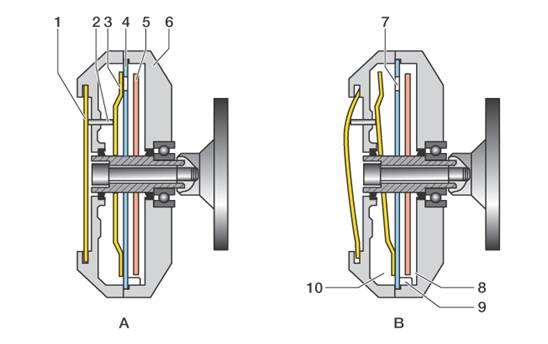 A engine cold B engine hot

The heat transfer between media of all kinds increases by increasing the flow velocity and enlarging the contact surfaces. Coolers consist of a tube or lamellar system in order to make the contact surfaces as large as possible. The cooler is connected to the cooling circuit via the thermostat. When the thermostat is open, the coolant flows through the radiator and cools down in the process (large cooling circuit).

Installation of the pre-assembled cooler-motor unit at MAN 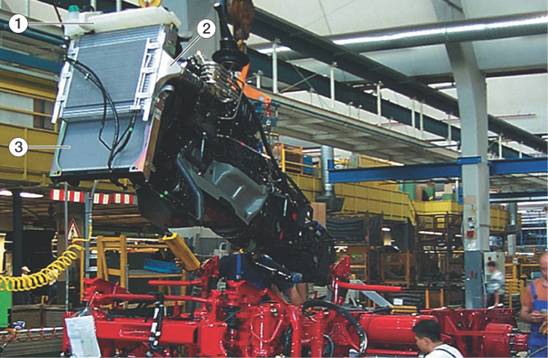 In the case of the water pipe cooler, the water tanks are connected with thin-walled metal pipes. Thin copper or aluminum sheets connect the metal tubes and enlarge the cooling surface (rib cooling). Tube coolers are considered to be particularly resistant. In the case of heavy trucks and special vehicles, the cooler is often divided into individually replaceable partial block coolers.

By soldering together thin sheet metal strips (lamellas) made of copper or copper alloys, flat channels are created through which coolant flows. The cooling effect of the finned cooler is greater than that of the tube cooler with the same dimensions, but its strength is lower. The thin lamellas can also become clogged more easily.

In order to further improve the cooling performance, the lamellar coolers are often designed as cross-flow coolers. The coolant inlet and outlet are on the side of the cooler: The water tank is divided. The coolant then flows through the cooler in the upper area to the right and in the lower area to the left. The high cooling effect is created by going through the cooling network twice. In order to be able to absorb the cooling water even when there is thermal expansion, cross-flow coolers are often equipped with expansion tanks.

The filler cap on the radiator's expansion tank is equipped with an overpressure and underpressure valve in order to be able to compensate for the pressure change as a result of the expansion of the coolant when heated. The valve only opens at an overpressure of approx. 0.3 bar, thus enabling the coolant temperature to rise to approx. 108 ° C. The vacuum valve opens when the temperature drops and reduces the pressure on the cooler.

To ensure optimal heat transfer, the coolant must flow through the cooling system at the highest possible speed. The water pump sets the coolant in rapid circulation in the closed cooling circuit. It is driven by the crankshaft via a V-belt. Centrifugal pumps are mostly used.

In order to avoid temperature fluctuations as much as possible, a thermostat is used in engines with cooling water. Its important task is to keep the engine at as constant an operating temperature as possible.

Depending on the existing engine temperature, the thermostat switches from the small to the large cooling circuit and increases or decreases the amount of heat dissipated. In the commercial vehicle sector today, expansion thermostats are used almost exclusively.

In the pump housing, an impeller runs in a narrowing housing, whereby the cooling liquid is pressurized. The liquid is thus circulated.

Coolant flows continuously to the pump from the radiator or thermostat (depending on the temperature of the coolant).

A waxy expansion material (expansion element) is located in a metal can. A piston, which is connected to the thermostat housing, protrudes into the expansion material. Two valve plates are attached to the metal can. Depending on the position of the valve disc, the coolant flows through the main or the secondary circuit.

When the temperature of the coolant rises to approx. 80 ° C, the expansion material expands to such an extent that the piston moves and the valve opens one of the flow devices. The main circuit is then activated and the cooler is integrated into the coolant circuit. 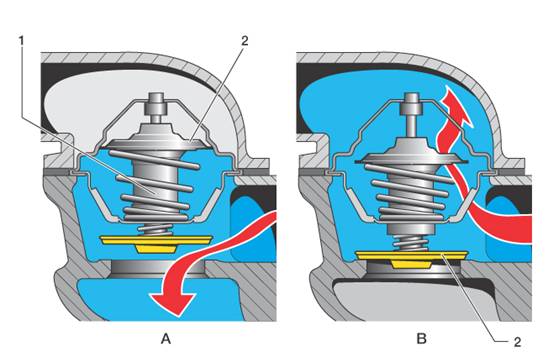 1 Metal can filled with stretch material