What are the most popular robotics competitions

On January 25th, 2020 our Robotik-AG school team met again, the "Positronic Brainiacs“, This time 14 other teams from the area to solve the tricky tasks of the competition.

In a total of 10 missions, our three students demonstrated their skills this time. Under the topic "galactically good“It was a matter of solving various problems in space travel. The self-built and self-programmed robot installed satellites, completed fitness training, played an autonomous taxi and landed in space. 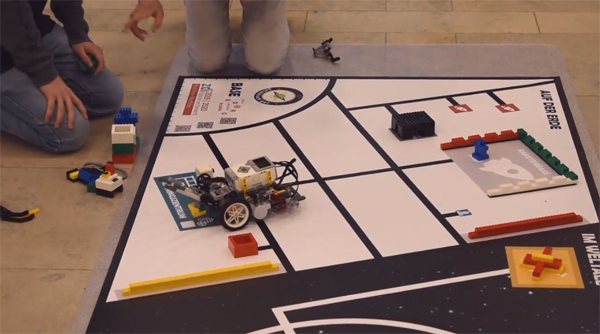 Our Positronic Brainiacs ended up in second place out of 14 after three grueling rounds and thus qualified for participation in the regional competition, in which the tasks are made more difficult and expanded.

The laborious additional working time our students invested has paid off and even a competition on a Saturday with such a success really makes you want more.

The next round will continue in March, until then it's all about improving, correcting, practicing and getting faster!

In 2018 our school team, the "Positronic Brainiacs", took part in the ZDI robot competition again. Under the motto “Our digital world”, the robots drove over the competition mats, collected stones, solved tasks and caused tremendous stress for the participants.

The tasks included Lego variants of various "Internet activities", such as distributing "Likes", evaluating online videos and equipping classes with tablets. The self-made robot solved the problems on the basis of the self-written programs of the students.

A total of 15 teams were in direct competition on the day of the competition in Neuss. Our team of secondary school students I and II fought hard for a good placement in the three rounds of the competition. Here it was necessary to defeat other teams as well as to make modifications and changes to the robot as quickly and efficiently as possible. 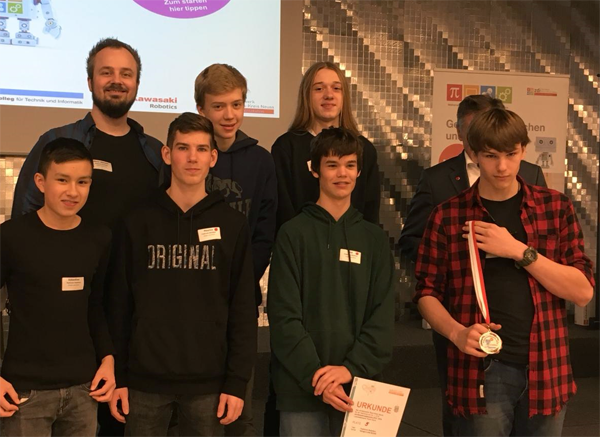 In the end, our Positronic Brainiacs made it to 5th place out of 15 and thus only narrowly missed entry into the regional competitions. For the next time, however, the goal is all the more clear - the placement on the podium.

Participation in the zdi robot competition in Aachen

After several weeks of preparation, ours kicked positronic brainiacs at the robot competition 2017 from the zdi in Aachen. Five schoolchildren gained a lot of experience and, on the exciting day of the competition, puzzled with their Lego robot on the tasks on the subject of "Intelligent, environmentally friendly and integrated mobility". A total of nine teams who had traveled tried their hand at the various tasks. In addition to buying tickets and transporting people, the robot should also swap an old diesel car from the teacher's parking lot with a modern electric car. The implementation of the practiced problem solutions under competition conditions required a lot of flexibility as well as spontaneity and a willingness to compromise. Which task can be reliably mastered and which one can be left out to be on the safe side? Our Brainiacs adjusted to the circumstances with a lot of enthusiasm and improved from round to round. After three nerve-wracking laps, which held many surprises in store for both the actors and the spectators, everything was decided. Unfortunately, it wasn't enough for a place on the podium this time, but it was positronic brainiacs have found new ambitions for the next time. 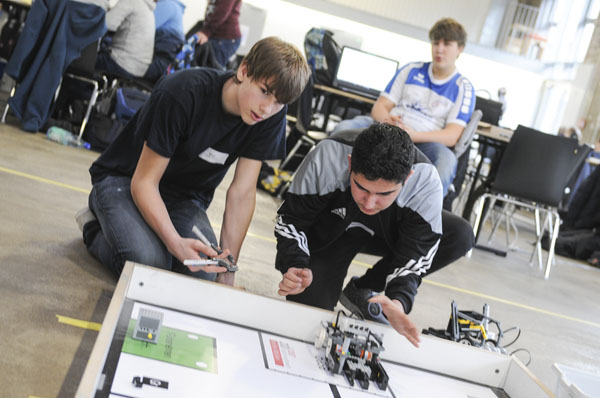 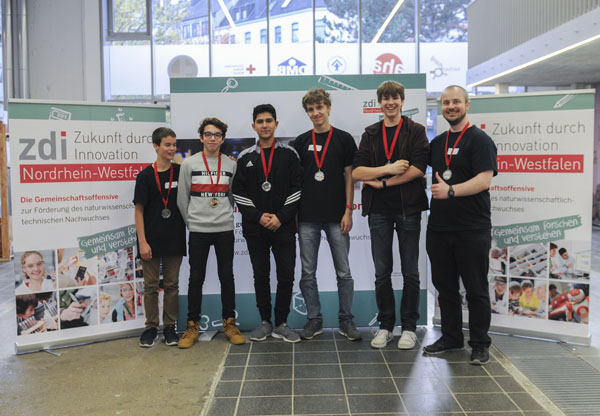 Robotics Competition 2009 - We were there!

After we had successfully taken 2nd place in the robotics competition in Cologne, we got ready for the NRW round in Düsseldorf. That meant hours of hard work building and programming robots, which is why we were at school until late afternoon on some days. But it should all be worth it.

On June 20th the time had come. In addition to our robot, spare parts and our programs, we were also in a good mood again, which had already helped us last time. After three rounds in which we let the robot perform the given tasks, we finished 6th out of a total of 80 places in North Rhine-Westphalia, with which we are more than satisfied.
Now part of our group is already preparing for the next competition: the First Lego League. Good luck!

Report on participation in the 2006 robotics competition

The cut-off date was May 15, 2006. We, the Positronic Brainiacs, consisting of 6 students from the ninth and tenth grades, from Ms. Maas and Mr. Zelgert, were let loose in the outside world. We took part in a NRW-wide robotics competition, the tasks of which had to be solved with Lego Mindstorms robots. After weeks of work, which fell victim to both vacation days and entire weekends, the competition was now to be held at the Rheinisch-Westfälische Technische Hochschule Aachen. There were seven competing teams from all over North Rhine-Westphalia that had to be won against. Our self-developed and programmed robot was supposed to solve 8 different tasks on a "playing field", from pulling a box to rescuing a dolphin, for each of which there were a certain number of points. Each team competed three times, in the end the highest number of points achieved was used as the final rating. In between small quiz questions were asked, through which we could get a small supply of sweets. Finally, it should be said that we came in sixth place, which was of little importance in view of the praise of the referee: Our technology is one of the best in the competition, but Lego is too imprecise for such ingenuity.