Tony chatted a few more friends and she
start a new game of "Mensch ärgere Dich nicht".
So everyone is waiting for a 6 so that they can place a pawn on the field.

Wild methods do the rounds: roll the dice with the left, take a dice cup, cast spells, ...

But now let's be sober: How big is it chanceto roll a 6? 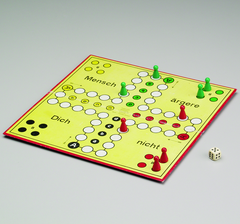 And the relative frequency?

How does the probability fit with these
Frequencies together, you might ask yourself.

Why did you draw these tally sheets and calculate relative frequencies when rolling the dice ...

But it's somehow logical: A dice has 6 identical sides, what else can happen than that you roll every number with the portion of $$ 1/6 $$. That's the point! You expect $$ 1/6 $$. That's what mathematicians call probability.

The probability of a result is the expected relative frequency this result.

At a Random experiment you can't predict the outcome.

The probability has the symbol $$ p $$. That comes from the English: probability.

Random experiments in which all results are equally likely are easy to calculate. When rolling the dice, all numbers from 1 to 6 have the same probability $$ p = 1/6 $$.

The probability is a proportion. That is, it lies between 0 and 1. And what about 0 and 1?

The following applies to the probability $$ p $$: