How does Earth's orbit affect the climate 1

Claim: “The CO2-The increase is not a cause, but a consequence of climate change "

On closer inspection, however, the CO follows2-Increase in temperature rise by about 1000 years. Although this phenomenon was predicted more than twenty years ago (Lorius et al. 1990), it still causes surprise and confusion for many people. Is now the increase in CO2-Concentration in the atmosphere is a consequence of global warming, or conversely, global warming is a result of CO2-Increase? The answer is: both are correct. 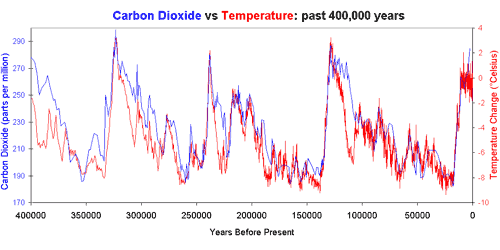 Illustration 1: Data on CO2-Concentration in the atmosphere obtained from an ice core from the Russian Antarctic research station “Vostok” (blue curve) and on temperature fluctuations over the past 400,000 years (red curve); Sources: Petit 2000, Barnola 2003

The three effects overlap in a complicated way and lead to long-term changes in the intensity with which the sun shines on the earth at different times of the year (in the northern latitudes the changes appear to be particularly large). The Milanković cycles thus lead to natural global warming - but these take place over thousands of years and are therefore much slower than the global warming that can be observed today.

For the delay of the CO2- Science has found convincing explanations for the increase in these prehistoric climate changes; for example, a warming phase around 19,000 years ago, the last transition from an ice age to a warm period, was examined very closely (cf. Shakun et al. 2012). According to this, the following chain reaction took place at that time: The Arctic warmed up through slow orbital changes. Large amounts of ice melted. The meltwater flowed into the oceans of the northern hemisphere. This inflow of water disrupted the ocean currents, which are used to redistribute large areas of heat between the northern and southern hemispheres. As a result, beginning around 18,000 years ago, the oceans in the southern hemisphere were the first to warm up.

When ocean areas warm, the CO generally decreases2-Solubility of water (Martin et al. 2005). As a result, more carbon dioxide escapes from the ocean into the atmosphere. The exact mechanism by which the deep sea CO2 is not yet fully understood, but it is assumed that it is related to the vertical mixing of the water in the ocean (Toggweiler 1999). This process takes about 800 to 1000 years, so that in prehistoric climate change, an increase in CO only occurs about a thousand years after the initial warming2Concentration in the atmosphere was observed (Monnin 2001, Mudelsee 2001.)

The outgassing of carbon dioxide from the ocean then had various consequences:

First, the increased CO increased2-Content of the atmosphere the original warming. The relatively weak warming effect of a Milanković cycle is in fact insufficient to bring about the extreme temperature change necessary to bring about the transition from an ice age to a warm age (this period is called deglaciation). In contrast, the reinforcing effect of the CO2 explain the warming that has actually occurred. (Incidentally, these observations are helpful in assessing the climate changes to be expected today as a result of certain CO2- Releases - in technical language: the "climate sensitivity" - to be able to estimate.)

Second, the carbon dioxide from the southern ocean was distributed throughout the earth's atmosphere, so that with a time lag, regions in the north also warmed up (Cuffey 2001). Tropical marine sediments point to a warming of the tropics around a thousand years after the warming of the Antarctic and thus around the time of the CO2Increase (Stott 2007). Ice cores from Greenland also show that warming in the north only occurs after the CO2-Increase in the Antarctic took place (Caillon 2003).

In Figure 3 the data for the transition from the last ice age to the interglacial can be seen in close-up: The warming of the Antarctic (red curve) actually went with the increase in CO2Values ​​(yellow dots) slightly ahead, but the global Warming (blue curve) only followed this CO2-Increase. In any case, more than 90 percent of global warming (blue curve) occurred to the CO2-Rise. 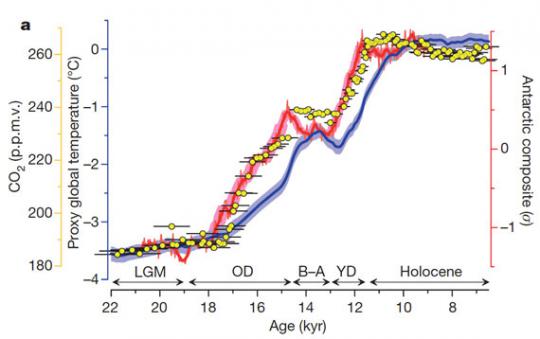 Figure 3: The global mean temperature (blue) determined from a large number of proxy data, shown as a deviation from the mean value of the early Holocene (around 11,500 to 6,500 years ago); a temperature curve in the Antarctic reconstructed from ice core data (red); Concentration of carbon dioxide in the atmosphere (yellow dots). Prominent time intervals are marked on the horizontal axis (LGM - Last Glacial Maximum, OD - Oldest Dryas Period, B-A - Bölling-Interstadial, YD - Younger Dryas Period and Holocene); Source: Shakun et al. 2012

Claiming the delay in CO2- Rise during prehistoric climate change refutes the influence of CO2 on global warming, thus testifies to a lack of understanding of the processes that are driven by Milanković cycles. In any case, an analysis of the research results on the past deglaciation phases shows:

Two things can be learned from all of this for current climate change: The current global warming is taking place far too quickly and too violently to be explained by orbital factors, especially since the current changes in the Earth's orbit parameters would have to lead to a very slow cooling. At the moment something is fundamentally different than in deglaciation phases, in which the CO2-The increase was actually only triggered by global warming. What then followed this higher carbon dioxide concentration in the atmosphere allows valuable conclusions to be drawn as to how the earth's climate system reacts today and in the coming decades and centuries to man-made CO2Emissions are likely to react.