Is mechanically good at IIT Hyderabad

Electrodes for supercapacitors made from corn husks

When processing maize, the pods are generated as waste. Instead of simply burning them as before, they could also be put to good use. Researchers at the Indian Institute of Technology in Hyderabad have now used it to produce material for electrodes in supercapacitors.

With a population of almost 1.4 billion, India has an enormous need for food, for example made from corn. According to the World Food Organization FAO, the country produced around 28,980,000 tons in 2019. The pods (technically lisel leaves or lysies) are incurred as waste. Currently, the majority of it is incinerated as its potential to transform into valuable electrode material is not being used due to a lack of awareness, expertise and technology.

Researchers at the Indian Institute of Technology (IITH) in Hyderabad have developed a simple and inexpensive process for extracting activated carbon from corn husks as an electrode material for high-voltage supercapacitors. This would also create a whole chain of additional earning opportunities for corn farmers. According to analysts, the global market for supercapacitors is growing at an average annual rate (CAGR) of 12 percent to an expected $ 720 million in 2025.

The research was carried out by Dr. Atul Suresh Deshpande, Assistant Professor at the Chair of Materials Science and Metallurgy at IIT Hyderabad, in collaboration with Dr. T. N. Rao, Deputy Director of the International Advanced Research Center for Powder Metallurgy and New Materials (ARCI), Hyderabad, together with her two students M. Usha Rani and K. Nanaji. Her research detailing the synthetic process and the electrochemical performance of the material produced was recently published in the Journal of Power Sources.

Carbon-based electrodes play a crucial role in the development of energy storage devices. As a rule, these electrodes are made from expensive, high-purity raw materials such as polymers, organic precursors and high-purity gases using various processes. In contrast, producing carbon electrodes from biomass is a simple and uncomplicated process. Dr. Rao commented: “Activated carbon from natural sources is a very promising electrode material for supercapacitors. So used the renowned Maxwell company[now part of Tesla; Note d. Red.] activated carbon from coconuts in their components. " 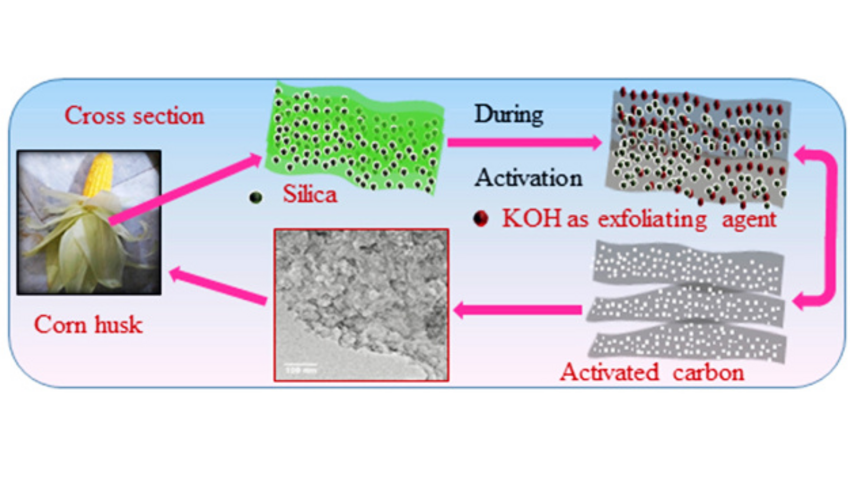 With this simple and scalable process, the activated carbon for the electrodes of supercapacitors is produced from the corn husks.

In order to obtain activated charcoal with a large surface area and a porous layer-like morphology from corn husks, the researchers added potassium hydroxide (KOH) as an activating agent. This creates a layered morphology. The interplay of morphology and high specific surface (1378 m² / g) increases the storage capacity of the activated carbon electrode material. The storage capacity of the activated carbon was measured using a high voltage electrolyte (1M tetra-ethyl-ammonium-tetrafluoroborate (TEABF4) in acetonitrile (AN)) tested. This showed a higher electrical performance (20 Wh / kg or 681 W / kg) at 1 A / g than with electrodes in conventional supercapacitors. The specific capacity is 80 F / g and it is characterized by good cycle stability. After 5000 cycles at 2 A / g, the capacity is still 90 percent of the initial value.

Dr. Rao added: “The main scientific challenge in this research is to design the pore size of activated carbon with a large surface area and a pore size that allows the ions of the electrolyte to be absorbed by the pores as well as possible, which in turn leads to a high capacity. The group at the IITH, in cooperation with the ARCI, has succeeded in converting corn husks into high-performance activated carbon for supercapacitors. Since a large amount of maize hulls is waste, the corresponding process technology is also scalable. "