Who is Syd Barrett

Being a musician was a dangerous business in the late 1960s and early 1970s. Dealing with drugs not only leads to unexpected musical heights, but also to real crash landings in health. Although in some cases death is not necessarily the worse fate, as the case of Syd Barrett shows.

When Roger Keith Barrett was born on January 6, 1946 in the English university city of Cambridge, his career began in 1962 in his parents' living room with a band called Geoff Mott And The Mottoes, in which he worked as a singer and guitarist. His school friend Roger Waters was one of the visitors to the session.

Two years later they formed a band that would make rock history together: Pink Floyd. Their first, psychedelically soaked album "The Piper At Tthe Gates Of Dawn (1967) is largely due to Barrett. The sound he developed is so new that Pink Floyd quickly became a favorite with critics and audiences alike."

In Swinging London, where the band is based, there is no shortage of drugs. Barrett especially befriends LSD, which he consumes excessively. The combination with his previously unstable mental state is devastating. Sometimes he stands apathetically on stage, sometimes he goes completely crazy. Barrett has no control over himself in private life either. The renowned psychiatrist R. D. Laing, whom the band consults, declares Barrett incurable.

To compensate for his failures, Pink Floyd hired another childhood friend, David Gilmour, as an additional singer and guitarist in January 1968. In April Barrett finds himself at the door. A decision that the band does not regret in view of the huge success in the following decades, but which will keep them busy until the end of their career. They support the songwriting genius financially and dedicate two of their greatest hits to him in 1975, "Wish You Were Here" and "Shine On You Crazy Diamond".

Supported by Pink Floyd's management, Barrett initially tries a solo career. But the albums "The Madcap Laughs" and "Barrett" (both 1970) do not leave a lasting commercial impression, although his former colleagues are busy contributing. 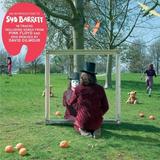 In 1974 Barrett returned to the studio, but the sessions did not produce any useful results. In 1975 he visited his former colleagues to record "Wish You Were Here". He's so bloated that the members of Pink Floyd don't even recognize him.

Not much is known about the following years. Barrett moved back to his mother in Cambridge in 1980, where he paints, tends the garden and occasionally strolls around town as the shadow of his former self. What is certain is that he dies on July 7, 2006 of complications from diabetes.

Despite the low output, Barrett's influence on the music of his generation is considered huge. 42 years after his departure, his childhood friend David Gilmour mourned him: in 2010 he published a lovingly and elaborately designed retrospective entitled "An Introduction To Syd Barrett".