How is Hinduism described 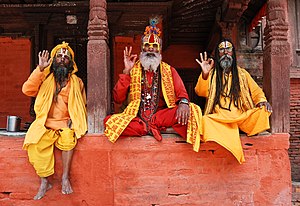 A saddhu is a wandering monk in Hinduism. Here are three sitting in Kathmandu in Nepal. The temple behind them serves the god Vishnu.

Hinduism is a religion from Asia. More precisely, there are actually several Hindu religions. The word "Hindu" comes from Persian and means something like "river". This is what the people of the Indus and Ganges valleys called themselves. These are two major rivers in India.

Hinduism has about 900 million followers. It is thus the third largest world religion after Christianity and Islam. Most of the Hindus live in India and Pakistan.

What do the Hindus believe in?

Hinduism is about the absolutely divine, about being in itself and the question of where it comes from. Hindus call this absolutely divine "Brahman". Brahman itself is inconceivable, much like the Christian God. But Brahman can appear in many different ways. Such an appearance is called a manifestation.

There are very, very many of these manifestations. They are what we know as Hindu "gods". There are three main manifestations that are most important today. Brahma is the Creator: He created the world. Vishnu is the sustainer. He ensures that the order of heaven and earth is maintained. Shiva is the destroyer: he destroys the bad, but is also there to ensure that something begins again and things continue.

How did Hinduism come about? 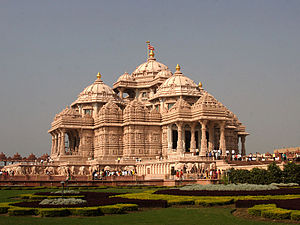 The Akshardham Temple in New Delhi, the capital of India. It is the largest temple in Hinduism.

The religions that are called Hindu are believed to have come from the Dravidas and Harappa peoples. They lived in the 3rd millennium BC in the valley of the Indus River. Around 1,500 BC, tribes from Central Asia who called themselves Aryans immigrated there. They suppressed the Dravidas.

As a result, the Dravidas and Aryan religions mixed, and Hinduism came into being. At that time, the most important scriptures of Hinduism to this day were written: the Vedas. That is why the period from 1,500 to 800 BC is also known as the “Vedic Period”.

Around the year 800 BC, the Brahmins gained supremacy. These Hindu scholars spread the first philosophical writings in what was then India. The subsequent period is the “classical period”, which lasted from 500 BC to 800 AD. Many temples and images of gods were created in the classical period. The gods Brahma, Vishnu and Shiva became more important until they eventually became the main Hindu gods.

What does rebirth mean?

Another important teaching of Hinduism is samsara, the cycle of life. The doctrine says that the human soul comes from the divine, the infinite. At some point the soul enters the cycle and becomes the first human existence. Man tries in his life to adhere to Dharma, the law, and to strive for Kama, the emotional, and Artha, the material things. He should also try to improve his karma through good deeds and a humble life. The karma is a kind of account: if a person has done good in his life, he is counted as well as the bad.

After death, the soul is reborn in a new human body and the cycle begins again. The constant improvement of karma has one goal, namely moksha, salvation. Moksha means the liberation of the soul from the cycle of samsara and the re-entry into the divine, infinite. If the karma of one existence was good, the soul comes closer to this redemption and in the next existence receives a higher place in the Hindu order, the caste system.

A poor neighborhood in Mumbai, India, where the untouchables live

The doctrine of the cycle therefore also determines the social order in Hinduism, the so-called caste system. Almost all Hindus are part of this order that cannot be left. It determines what you can work as. You can only marry someone who belongs to the same caste.

The top caste are the Brahmins, to which, for example, priests and scholars belong. The second caste are the Kshatriyas, with soldiers and higher officials. The third caste are the Vaishyas, with traders and merchants. Finally, the fourth caste are the Shudras, the servants, including bakers, weavers and day laborers.

The so-called Harijans, the untouchables who are still among the Shudras, are not in the caste system. They do all jobs that are considered dirty, such as street sweepers, undertakers or leather workers. The caste system has been officially abolished in India today, but it is often still of great importance in the everyday life of many Hindus.