The Philadelphia Phillies (59-56) look for all the world like a defeated ball club following yet another loss in which they simply did not show up to play.

That would be Thursday’s series opening 5-0 defeat at the hands of the host San Francisco Giants (57-59) at Oracle Park.
The feeble Phillies offensive attack, such as it was, consisted of three base runners. Only a one-out, pinch-hit single off the bat of Cesar Hernandez kept them from getting no-hit by Madison Bumgarner.
In the end, the Giants starter combined with a pair of relievers to shut the Phillies out. It marked the seventh white-washing of the season for the Phillies batters. To call them “hitters” at his point would be to besmirch that term.
Phillies starter Aaron Nola was part of the no-show team effort. The club’s ace was chewed up by a team that came into the game statistically as the second-worst offensive club in the National League, one that had been averaging only 2.78 runs per game over their previous nine contests.
The Giants rapped out seven hits against Nola, who also walked two batters. They were also the beneficiaries of a pair of wild pitches thrown by Nick Pivetta in relief, and a throwing error on backup catcher Andrew Knapp.
Mike Yastrzemski, grandson of legendary Boston Red Sox left fielder and Baseball Hall of Famer Carl Yastrzemski, was the offensive star for San Francisco. The new ‘Yaz’ ripped a two-run double in the bottom of the 3rd inning to push an early Giants lead out to 3-0. He then blasted a solo homer, his 11th of his rookie season, in the bottom of the 7th inning to provide the final score. 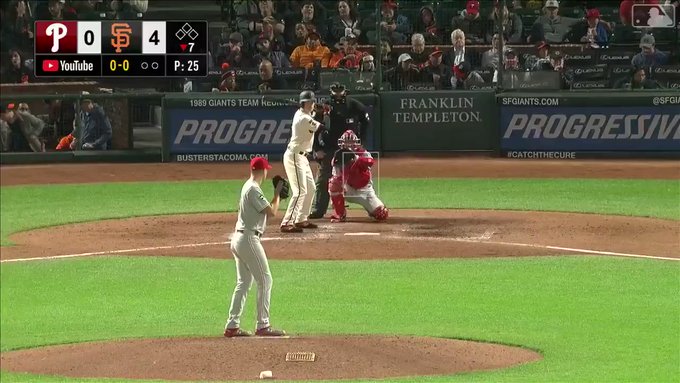 See Phillies Nation’s other Tweets
This was a fourth loss in five games for the Phillies, who have now gone just 3-6 over their last nine. It dropped the club out of an NL Wildcard spot as well. They now sit in a three-way tie, a half-game behind the Milwaukee Brewers in the race for the final National League postseason berth.
But playoffs should be the furthest thing from the mind of the Phillies players at this point. There is absolutely zero chance of this team reaching the postseason for the first time in eight years. A season that began with so much excitement and anticipation has devolved into a hellish nightmare of injuries, inconsistencies, and failures, both on the field and in the front office.
Frankly, it’s difficult to imagine that this level of play can continue for very much longer without someone losing their job over it.

While Yastrzemski doubled, homered and knocked in three of the five Giants runs, this was Bumgarner’s game. He tossed a masterpiece, and very nearly one for the history books.
Bumgarner retired the first 10 Phillies batters in a row before losing Hoskins on a full count cutter. Then he left an 89 mph two-seam fastball a little out over the plate, and lost his no-hit bid to a Cesar Hernandez single with one out in the 7th inning.
If this is going to be the final seven weeks for MadBum in a Giants uniform after 11 mostly glorious campaigns, then the pending free agent is going out in style and showing that he still has plenty in the tank, having just turned age 30 a little more than a week ago.