J.T. Realmuto blasted a grand slam as one of four Phillies homers

The host Philadelphia Phillies (55-50) used the long ball, blasting four home runs to power past the Atlanta Braves (62-43) and salvage the series finale with a 9-4 victory on Sunday afternoon at Citizens Bank Park.

Atlanta took the first two in this weekend set between the NL East Division rivals despite being out-hit by the Phillies by a 36-31 margin over the three games.
Still, this was a big victory for the Phillies. It came on a day when starting pitcher Aaron Nola looked to be totally in control, was given a big lead, and then suddenly hit a wall on a hot afternoon in South Philly, nearly blowing that lead before being bailed out by his offense.
The Phillies broke out on top with a pair of solo home runs. Bryce Harper started the scoring by slamming his 18th deep to center field off a first-pitch fastball from Braves starter Kevin Gausman in the bottom of the 1st inning. Then in the home 3rd, Adam Haseley lofted his third home run of the season just over the center field fence to give the Phillies a 2-0 lead.

Phillies Nation@PhilliesNation
Adam Haseley’s solo home run to leadoff the bottom of the 3rd has made it a 2-0 Phillies lead. 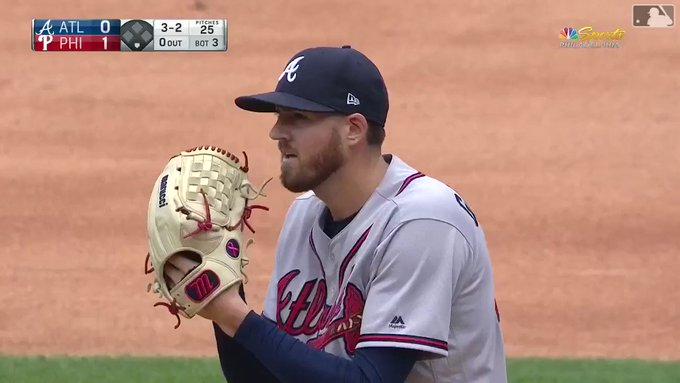 See Phillies Nation’s other Tweets
While Nola was keeping Atlanta off the scoreboard through the first half of the ball game, the Phillies offense was having a typically difficult time opening up their lead. That is, until the home 5th inning.  Nola led off with his second hit of the day. That was followed by singles from Scott Kingery and Jean Segura to load the bases with nobody out and the Phillies 3-4-5 hitters due up to bat.
For a few minutes, it appeared that this would be yet another disheartening wasted opportunity. Harper struck out, and then Rhys Hoskins popped to shallow center. With two outs now, J.T. Realmuto stepped in and battled the count full. Then pumped a 96 MPH four-seam fastball right down the pike, and the Phillies catcher turned it around, crushing the ball way out over the left field wall for a grand slam to push the lead out to 6-0.

Phillies Nation@PhilliesNation
JT Realmuto blows it open with a grand slam in the bottom of the 5th inning, pushing Phillies lead out to 6-0. 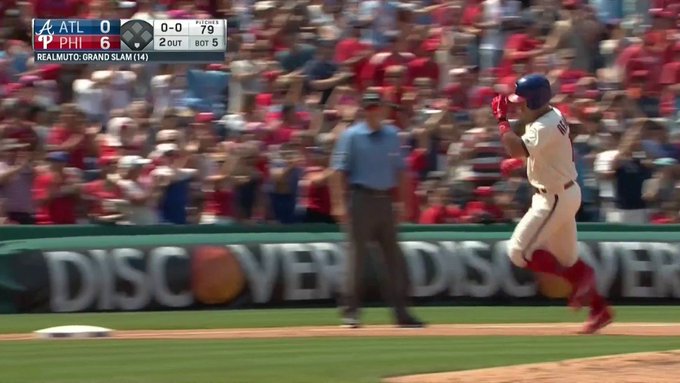 See Phillies Nation’s other Tweets
This one seemed well in hand, with Nola mowing through the Braves. And then suddenly he ran out of gas in the top of the 7th inning. It started as he walked Josh Donaldson after battling to a full count. After Brian McCann singled, Nola struck out Adam Duvall and got ahead 1-2 on Ender Inciarte.

Nola battled in this one, shutting out the Braves for most of the day before running out of steam in the top of the 7th inning. (Photo by Gavin Baker/Icon Sportswire)
Nola then made his first truly big mistake. He left a meaty 90 MPH two-seam fastball right out over the middle of the plate. Inciarte didn’t miss it, putting a nice and easy swing on the ball and driving it out over the right field wall to cut the Phillies lead down to 6-3. On the very next pitch, Johan Camargo crushed a changeup from Nola out to right as well, and that suddenly the Phillies cushion was just 6-4.
Nola got Matt Joyce to fly out, but then Ronald Acuna Jr. singled to bring Ozzie Albies to the plate as the tying run. Acuna took off, stealing second base. On that play, Segura took the throw from Realmuto, but seemed to get his foot jammed on the second base bag. Segura came up limping and had to leave the ball game, helped off the field.
That outcome caused manager Gabe Kapler to bring Kingery, who had started in center field, in to take over at shortstop, putting Roman Quinn out in center. Meanwhile, Acuna also had trouble after sliding in head-first to the bag. He would also end up leaving the game.
Albies worked a walk, and that would be all for Nola. Calling to his bullpen for Adam Morgan, Kapler went for the lefty-on-lefty match-up as the dangerous Freddie Freeman came up with a chance to give the Braves the lead. Morgan won the battle, getting Atlanta’s three-hole hitter to fly out to center, and the Phillies kept ahold of the lead at 6-4.
Often times in this frustrating season, the Phillies offense would run dry and the bullpen would squander the lead, and the club would suffer a disheartening defeat. That would not be the case on this afternoon.
In their half of the 7th, the Phillies offense responded. Harper drew a one-out walk, and Rhys Hoskins followed by blasting a two-run home run to left, pushing the lead out to 8-4. Then with two outs and two runners on, Haseley delivered again, ripping a ground RBI single to right field, give the Phillies their final cushion of 9-4.
Nick Pivetta would come on to shut down the Braves over the final two frames, allowing just one hit while striking out two batters, including Charlie Culberson to end the game. The win went to Nola, who moved to 9-4 on the season. The Phillies will now enjoy another off-day on Monday before welcoming the hot San Francisco Giants to town for a three-game series beginning on Tuesday night at Citizens Bank Park.

The Phillies catcher stepped to the plate in a game that was still up in the air. With a 2-0 lead, the Phillies had loaded the bases with nobody out in the 5th inning. But after Harper struck out and Hoskins popped out easily, it appeared as though Gausman would wriggle off the hook. Realmuto made sure that didn’t happen, with the All-Star catcher crushing a grand slam to make it 6-0.